The year 2017 was an interesting year showing that chess is becoming more universal with the steady rise of China and India. Viswanathan Anand won the World Rapid and took 3rd in the World Blitz, a sign that he is still a force to be reckoned with in the upcoming Candidate’s Tournament. If this is his last stand, then we should be effusive in our praise as Anand has been an ultimate statesman.

Thanks everyone. Mildly put, I am very pleased with my play! Happy 2018. Now family time till Wijk. This picture is for my wife, she has asked me to bring the medals back very safely. This is proof! pic.twitter.com/zkwE41tanm

Behind Anand comes some talented players such as Vidit Santosh Gujrathi (2721 ELO) and prodigies 13-year old Nihal Sarin and 12-year old Praggnanandhaa Rameshbabu. We will see what progress they make in 2018. In this Olympiad year, we will see more stars come out from diverse places.

Speaking of diverse places, The Chess Drum was able to make a presence in South Africa and presented the club with a copy of the book, “Triple Exclam.” In addition, there was a photo essay done to capture the beauty of the continent. It’s about time we staged more tournaments there. The continent just produced its first 2700 player in Bassem Amin. Progress! 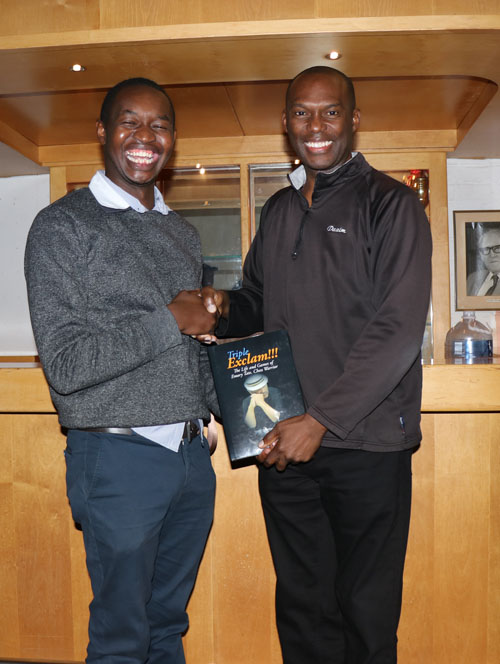 In the U.S., there was some buzz pertaining to the blitz battles that were being staged by the Chicago Chess Blitzers. They staged three team matches with (Memphis, Cleveland and St. Louis) and a number of cage matches with Daniel X Jones as one of the main blitzers. In the coming year, fans are awaiting the Chicago vs. New York showdown. Nathan Kelly has done a fantastic job in promoting the events.

The 2017 saw the launch of the aforementioned Triple Exclam!!! The Life and Games of Emory Tate, Chess Warrior in March. The book was well-received and was featured on a broadcast during the U.S. Chess Championships. The book is still available through The Chess Drum and paperback version will be available in a few weeks.

There were a couple of controversies with the 2017 Women’s World Championship being held in Tehran leading to “hijabate” boycotts by a few players including the U.S. Women’s champion. Despite the controversy, the event was well-run and Tan Zhongyi won the crown. Sadly, she has made no effort to maintain her activity since winning.

In other news, the other finalist Anna Muzychuk protested the 2017 World Rapid and Blitz held in Saudi Arabia last week because of human rights concerns. The other issue was the refusal of visas to the Israeli players due to political sanctions.

World Champion Magnus Carlsen made a statement in the Norwegian media, “If the world Chess championships are to be played in Saudi Arabia again they MUST allow all players from all countries to participate.”

Here was my take…

The same has to be said for other countries as well. We have a tendency to be quiet when western nations impose travel sanctions on specific countries… either through technicalities or for political reasons.

In the World Rapid and Blitz, Viswanathan Anand defied odds to win the Rapid segment while Ju Wenjun of China took the women’s competition. In the Blitz competition, Magnus Carlsen defended his title by winning in convincing style, crushing the competition on the second day with 9/10 and ending on 16/21. Nana Dzagnidze won the women’s tournament with 16.5/21. There was a controversy when Russia’s Ernesto Inarkiev tried to claim a win against Carlsen for saying Carlsen made an illegal move. He didn’t. The problem was Inarkiev was the one who made an illegal move! Here is what happened…

Here's what happened in the game between @MagnusCarlsen and Ernesto Inarkiev in the first round of the World Blitz. #RiyadhChess #controvesy #rules

Arbiter told Inarkiev to play on after which he refused and appealed. He lost the appeal and the game. Carlsen went on to have fantastic result. If Inarkiev had gotten away with an obvious fraud, it could’ve changed the nature of the tournament. Carlsen’s win was a sort of “poetic justice.”

Forgot to mention that another World Champion was blitzing when Garry Kasparov played in the St. Louis Rapid & Blitz tournament in August. The Chess Drum covered the event and while it was difficult to get an interview with the 13th World Champion, others were conducted with Grandmasters Levon Aronian, Leinier Dominguez and Elshan Moradiabadi.

Unfortunately, there were a few deaths reported by The Chess Drum including Kenneth Clayton a few days ago (obituary). Also joining the realm of the ancestors as Charles Kuwaza of Zimbabwe (obituary), Everest Tucker of the U.S. (obituary) They left their respective legacies and in this next year we will make new ones. Following are the memories from 2017. Enjoy!