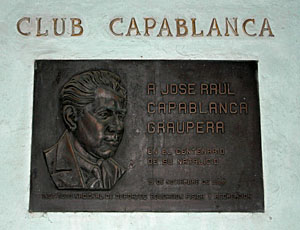 Club Capablanca will be one of the venues featured in the documentary.
Photo by Daaim Shabazz/The Chess Drum

In January, Karney Hatch contacted The Chess Drum about a documentary he was filming on chess in Cuba. He had read the blog posts on the Drum here and here from the 2012 visit. The filmmaker mentioned that he was still casting for the project and had enlisted the help of Claudia Muñoz.

The Texas Tech freshman delighted in the film and told The Chess Drum, “The Texas Tech Chess Team will be competing in two different competitions in Cuba and I will get to be apart of it,” said Muñoz. A very popular chess player in social media circles, Muñoz will also have her coach Alexander Onischuk and teammates at Texas Tech to play a part in the feature. On the Indiegogo fundraising page, it reads:

The film will be a character-driven adventure story about a group of foreigners visiting Cuba for the first time, while at the same time diving into the back stories of the Cuban chess players as well. In the process, we’ll get a slice-of-life look at life in Cuba in 2017 through the eyes of both Cubans and outsiders.

Cuba is a chess “wonderland” with tremendous support by the government and society in general. The 1966 Olympiad was famously held at the Habana Libre Hotel. At that tournament, Bobby Fischer scored 15/17 and photos from that tournament are still displayed throughout the hotel. Chess reverberates throughout the entire society and can be found played on the streets, in back yards, on the front porches and in shops. Artistic chess motifs dot the country.

Hatch seeks to examine the vibrant chess culture of Cuba and the evolving relationship between the U.S. and Cuba since the thawing of relations under the Obama administration. He is currently conducting a fundraising campaign to reach an $11,000 mark. Below is a short video about the project.