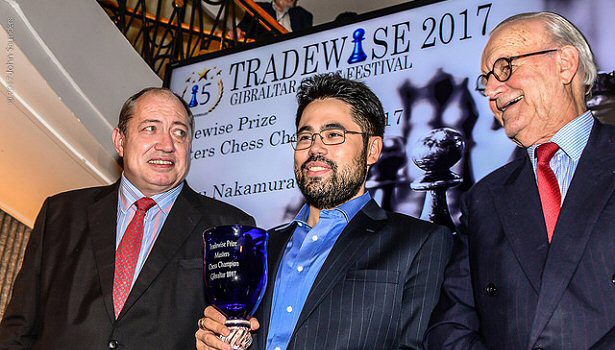 Hikaru Nakamura has won the Gibraltar Masters for the third consecutive time (2015, 2016, 2017) after winning the playoff over David Anton Guijarro. Nakamura stated in an earlier interview that he enjoyed the environment of Gibraltar, the weather, the scenery and conditions. It would actually be his fourth victory at the event, first winning in 2008.

Tania Sachdev asked Nakamura about the tournament and he mentioned the stellar play of Anton, but mentioned that he was confident after beating Yu Yangyi. In terms of the three wins, he stated that while his 2015 victory was smooth his last two victories required him to make a late push. He did take some satistfaction to win a tournament with two higher seeds. He looks to “three-repeat” in Zurich and has the U.S. Championship and the Grand Tour ahead. Here was Nakamura’s reflections on the tournament.