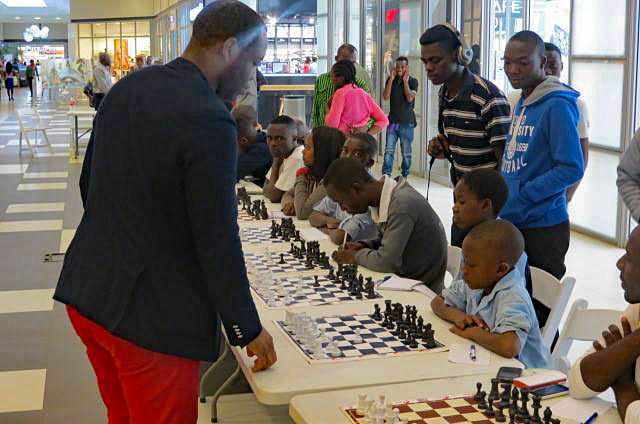 During Pontus Carlsson’s trip to Zambia, he excitedly told me about an 8- year old player who had held a draw against him in a simul. He said, “The small boy that drew me in the simul is a coming star with the right training. I think his name was Kennedy Shane. He has the skills, the strength and the interest. He forced me to play another game today and it was another draw.”

It is no surprise that Zambians are some of the most talented players in Africa and have produced a cadre of decent masters including Amon Simutowe, the first GM in Sub-Saharan Africa. Kennedy’s breakthrough may be ahead as he attempts to gain international exposure at the Commonwealth Championship in Dehli, India.

Unfortunately, funding is scarce and there are efforts to raise funds for the budding star. SK Dhillon of Canada has begun a gofundme campaign to raise funding and currently donors have contributed one-third of the targeted US$3500. Mulenga Cliff Mulenga has made this appeal,

On behalf of Yofoso Chess Academy, I wish to sincerely thank everyone for the donations, as we have managed to exceed a tenth our our target. We also want everyone for helping spread the word out there. With this effort, exhited in the coming days, our young Chess player will hedge closer to participating in the 2017 Commonwealth Chess Championship! Together we can!!!

Kennedy is from the YOFOSO Academy in Lusaka, Zambia and the Under-9 African Schools Champion and Africa’s youngest titled chess player ever.