The fourth Multi-site Chess Tournament took place Saturday December 3rd, with 3 venues and a 3-hour time zone difference among them. The venues were New York Chess & Games, the California Youth Chess League in Santa Clarita near Los Angeles, and the Long Island Chess Center in Massapequa, NY. Two players entered in Santa Clarita, five in Brooklyn and four in Long Island for a total of 11 players.

Players again enjoyed the combination of normal OTB play at their respective venues, and online play with players across the continent. This was the first multi-site featuring an internationally titled players, namely IM Jay Bonin. 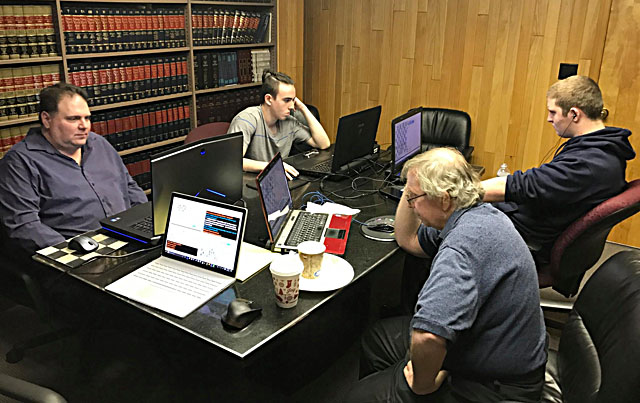 Keen action in three cities across the U.S.
Photo by Brian Karen

IM Bonin won all of his games to take clear first and $65, despite a scary episode against National Master Ernest “Steve” Colding in the opening. Colding was so disappointed by that mouse slip loss that he went on to be upset by rising star Noah Flaum, who tied National Master Tim Mirabile, winner of the very first Multi-Site, for 2nd-3rd($19.50 each). Los Angeles players Adam Draheim and Kevin Golchin split the U1800 prize of $13 each, and young Mishca Braswell of Brooklyn won the U1500 prize of $13.

Interestingly, Long Island players ran the table at the top of the tournament, and Los Angeles killed it in the U1800. Colding looked set to score a stunning upset against Bonin, but mouse-slipped to retreat a bishop from d2, instead of advancing a Rook to e3 on a critical move. Mouse-slips are a significant factor in online games, adding drama for spectators and fans, and heartbreak and joy for players:

We strongly encourage future participants to play games on ICC and in particular to play in ICC tournaments to familiarize themselves with the interface and device requirements. Lack of familiarity was once again a significant issue, with several players lacking current memberships on ICC.

Very much looking for additional venues, for more weekend events, for scholastics, and for multi day events such as “every Monday for 4-6 weeks”, that kind of thing. I think the concept is very applicable for our communities, and more broadly those in areas where there’s little activity wanting to link up with others across the country and the world.

For more information on the idea of a multi-site tournament, read Jones Murphy, “Murphy’s Law: Thoughts on Millionaire Chess,” The Chess Drum, 28 October 2014.