The “Best in the Midwest” rivalry continues to brew as the Chicago Chess Blitzers travels six hours (one way) to Cleveland to take on the Heavy Hitters at Case Western University. The event was designed to be a 15-players event with each player playing a counterpart twice with each color. There was good cheer before the match as the pregame trashtalk in social media was legendary. Other cities chimed in to speculate on the match and future battles.

Tichawona Tony Troy was the main organizer from the Heavy Hitters and had visited the Chicago Chess Club a couple of weeks earlier to get a feel for the competition. Cleveland was ready. They had new team shirts and had reserved a wonderful venue at Case Western University for the event. After the Chicago Blitzers arrived, they changed into their team shirts and the match was set.

As players milled about acquainting themselves with one another, informal introductions were also given to the live online audience. Cleveland legend IM Calvin Blocker gave encouraging words and described chess as a unifying force. Blocker was once one of the Midwest’s strongest players, but had to forgo more serious ambitions in chess to care for an ailing mother. His story is indeed inspiring.

Roger Hickman, the President of the Chicago Chess Club, made some remarks in announcing the opening of the Chicago Chess Club and then declaring the match to start with the UFC charge, “let’s get it on!” There was a review of the rules by tournament director Roy-Allen Bumpers and questions were raised and addressed. One in particular was the idea of promoting a pawn to a queen. Famous incidents have involved elite players promoting a pawn without replacing with a piece which counted as an instant loss. However in this tournament, there was a different explanation. After that clarification, the games started! 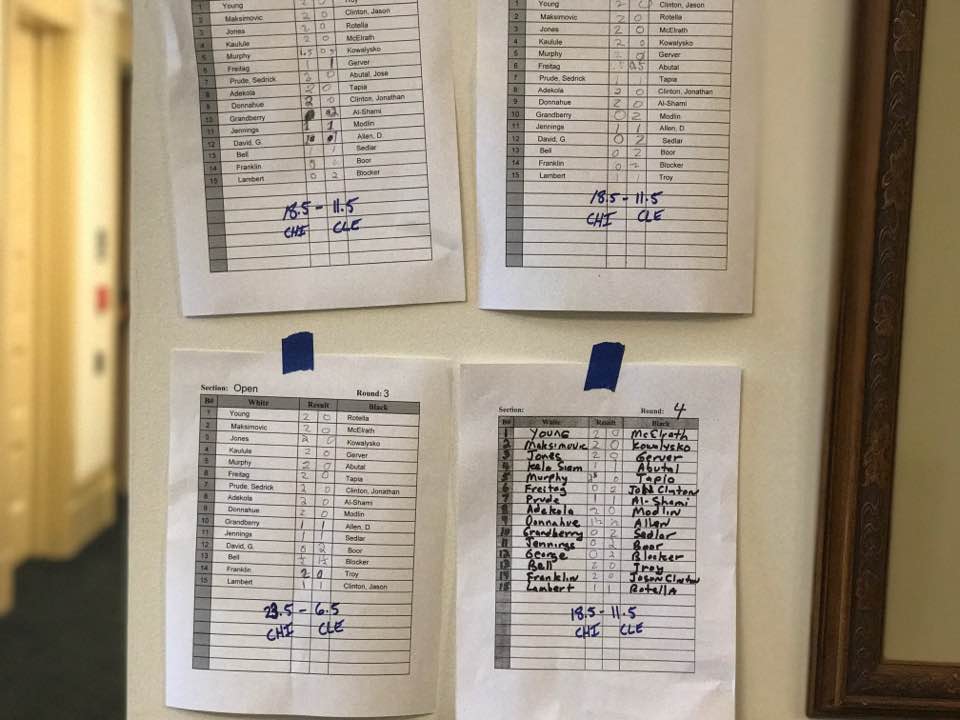 Chicago jumped out to a quick 38-point lead in the first four rounds. 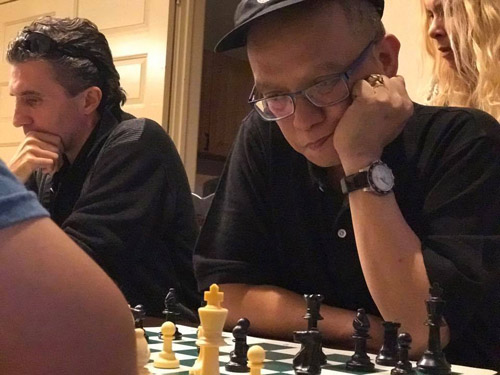 In the first six rounds, IM Angelo Young, IM Dejan Maksimovic, Tom Murphy had 12-0 while Daniel X Jones, Kela Kaulule and Aderemi Adekola were on 11-1. FM Carl Boor paced Cleveland with 12-0 while IM Calvin Blocker was on 10½-1½ after being upset by A-player Stephen Jennings.

After a couple of more rounds, the trend continued and Chicago had bolted to a 157-83 lead nearly doubling Cleveland. It turns out that round 7 would be the most competitive with Chicago barely edging Cleveland 17-13. For all practical purposes, the match was theoretically over as it would be nearly impossible to make up 74 points in the remaining seven rounds. 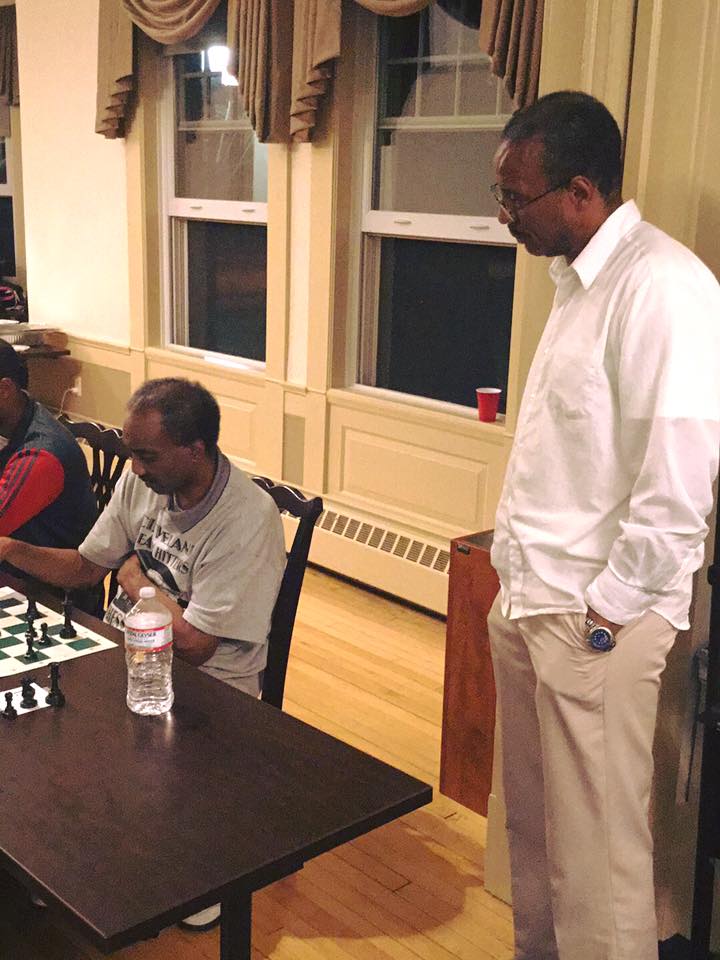 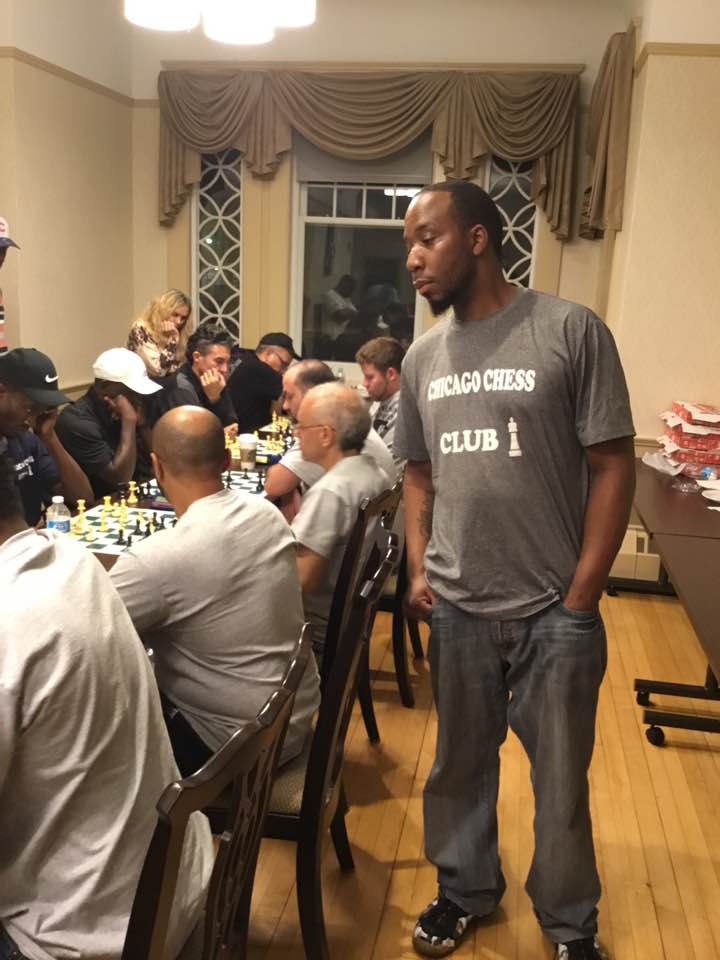 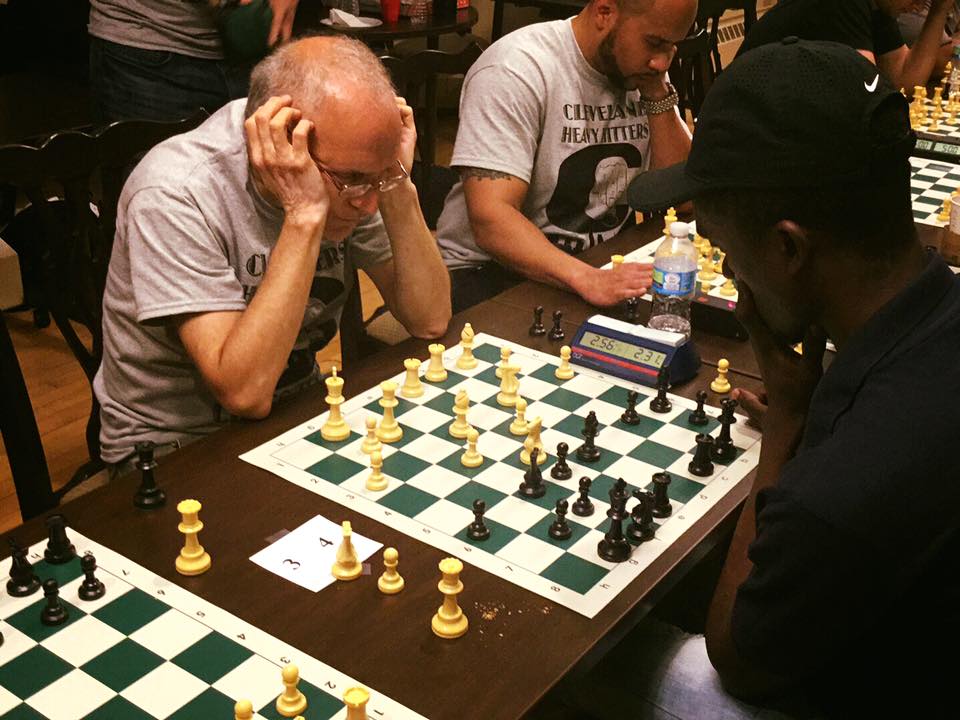 Nathan Kelly told The Chess Drum that the Cleveland players may have had trouble keeping up the torrid pace of the event and were not used to playing at such intensity. Clearly the new chess club in Chicago has given ample opportunity for the Blitzers to sharpen their skills. Unfortunately for Cleveland, the onslaught continued. 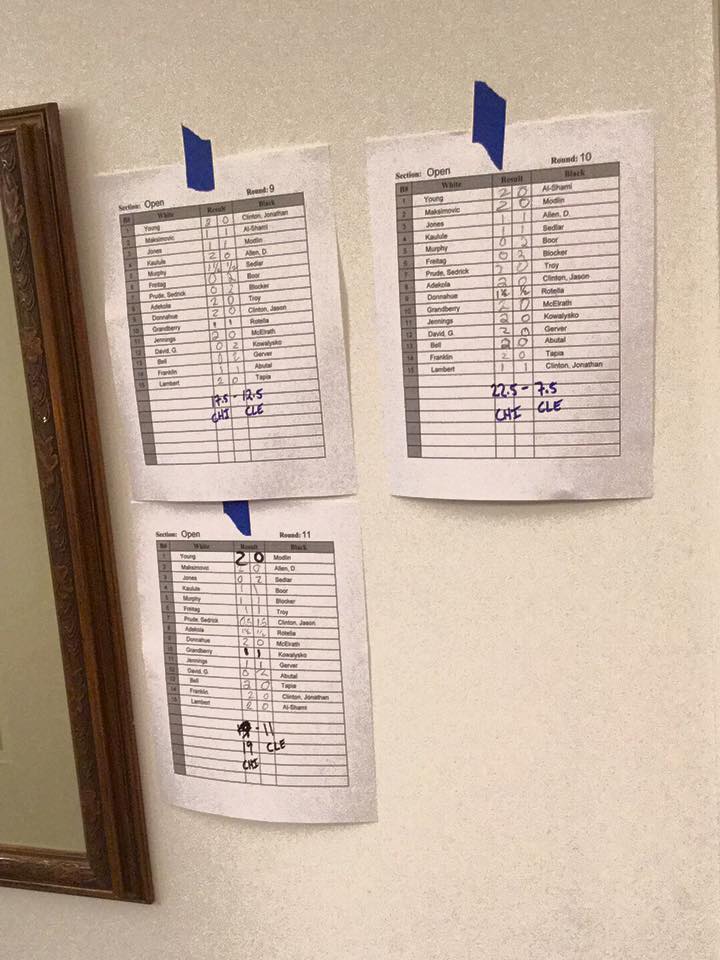 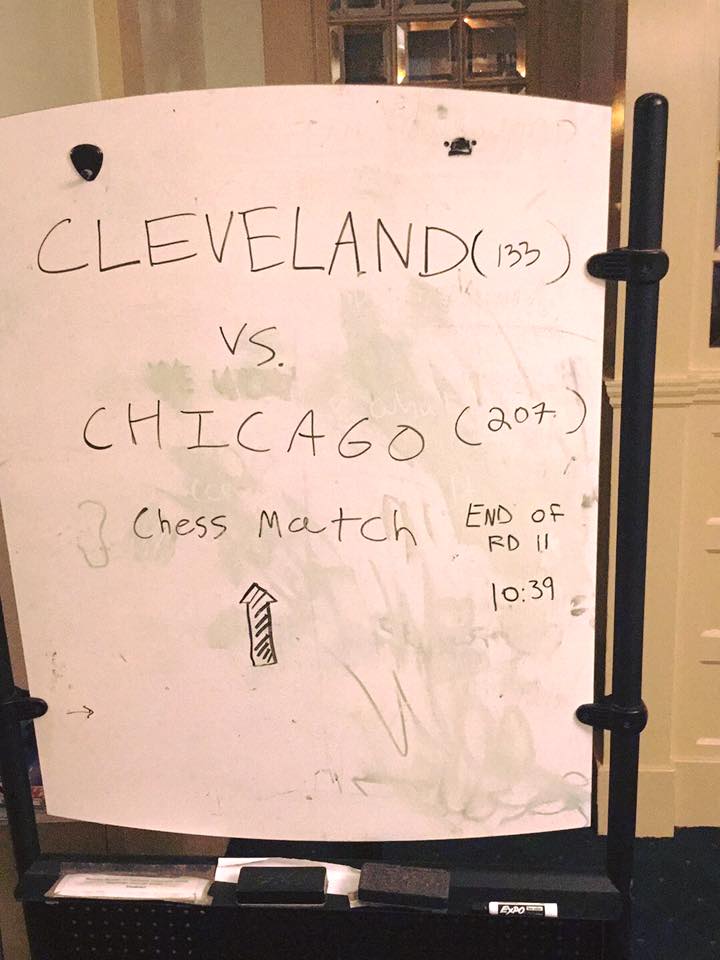 Round 12 had a bit of drama with dispute in two of the matches. This dispute between Tony Rotella and Sedrick Prude followed a thrilling battle and came down to a rook ending that appeared headed for a draw. In fact, the position is completely equal. As Rotella’s clock winds down near forfeiting, he claims a draw, but more specifically, a “book draw.” What that means is that black had no possibilities of winning. However, Rotella had run out of time as his clock hit 0:00 thus rendering any such claim invalid. Watch the action.

Despite the heated debate, Rotella went on Facebook to say,

I am not going to fan the flames, but insufficient loses chances were allowed and announced at the starting of the tournament, and our TD called a very experienced TD from the area who sided with me. I’m still not totally certain about the ruling (I think I’m probably wrong, and mixing it up with the older master/class subjective crap) but there’s no question I was correct to at least inquire about it. Who wouldn’t? My opponent was great, and either way it was awesome to play him and chill with the dudes from Chicago. And Roman is right, the real argument took place right next door and was far more entertaining for all involved. ???? 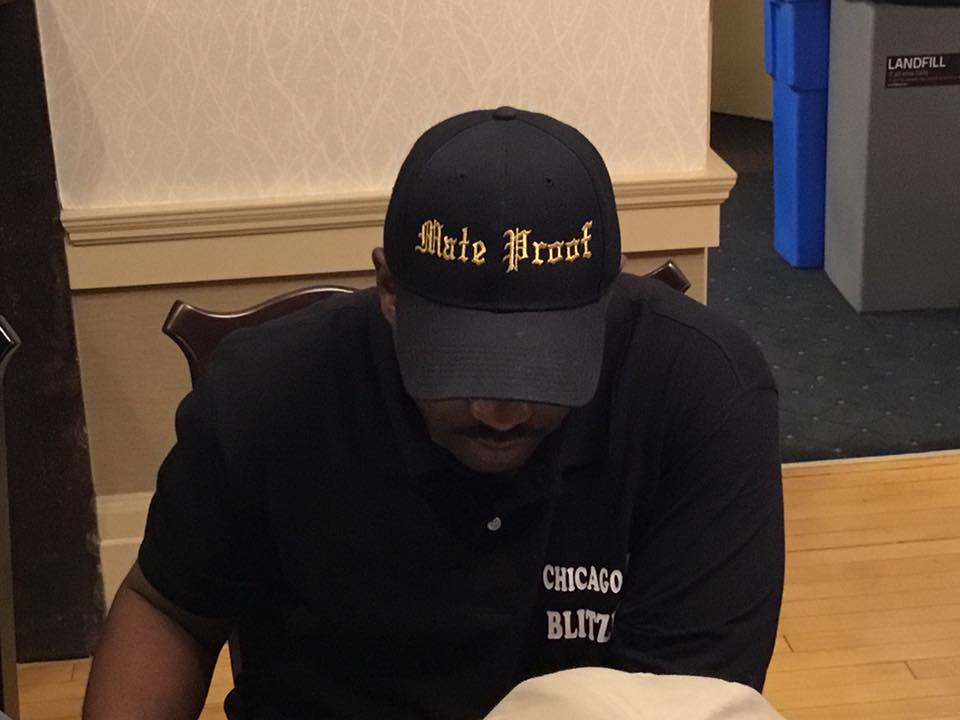 What Tony was referring to was the McElrath-Adekola game. If you noticed the next board in the video, you will see Flamando McElrath debating with Remi Adekola about their first game. Apparently Flamando thought Remi resigned. It was a clear misunderstanding as everyone in Chicago knows that Remi never resigns in blitz games. So after Remi also won the second game, they revisited the debate once again. Nevertheless, both games went to the Chicago player. Chicago approaching midnight with three more rounds remaining, was now ahead by more than 80 points.

Fatigue had set in and now the teams were simply trying to complete the schedule. The last three rounds was an indication of how things had gone for Cleveland. Chicago ended the battle in resounding fashion by 293-157 (+136). Leading scorers of the match were IM Angelo Young (26½/30) and Kay Kaulule (26/30) for Chicago; FM Carl Boor (26/30) and IM Calvin Blocker (21½/30) led the charge for Cleveland.

It was a grueling match and both sides were to be commended for fighting in the spirit of chess. New friendships were made and memories were etched in the annals of chess lore. Cleveland did an outstanding job as host and the event was certainly an effort worthy of praise. The Chicago crew drove through the night back to the city with Tichawona Tony Troy already seeking a revenge match.

It is perhaps the beginning of greater things to come as some of the players have already begun discussing league play. It is unclear where Cleveland Heavy Hitters will land next, but Chicago Chess Blitzers are already in negotiations with Detroit for a possible showdown. As Drum readers will know, Detroit will seek poetic justice for FM James Canty who lost a tough match against Daniel X Jones. Nevertheless, the excitement is high and more matches are ahead. Stay tuned! 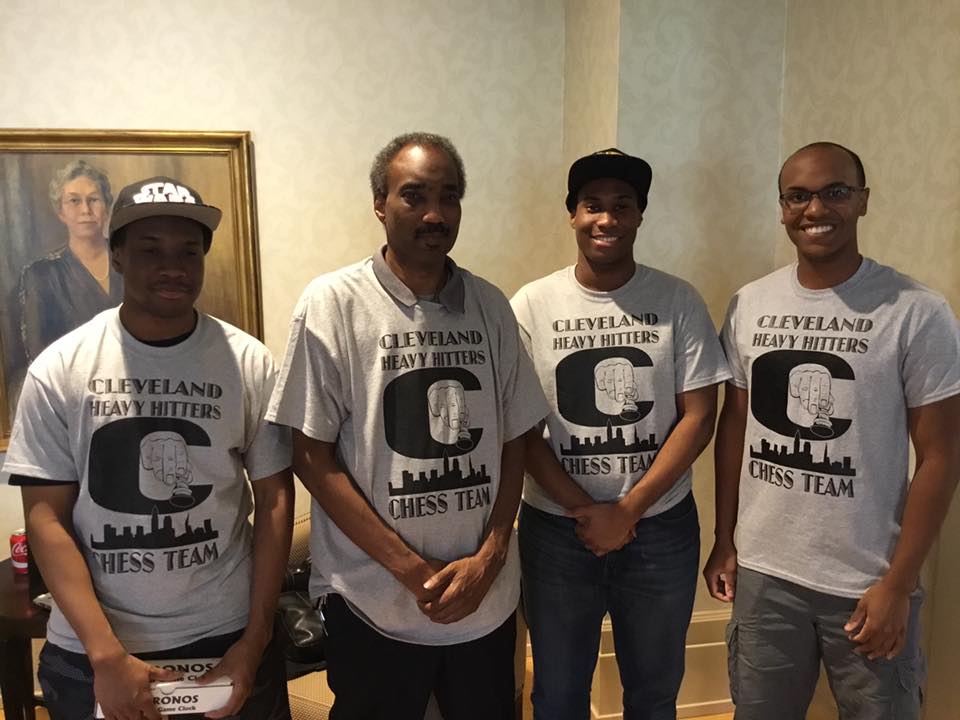 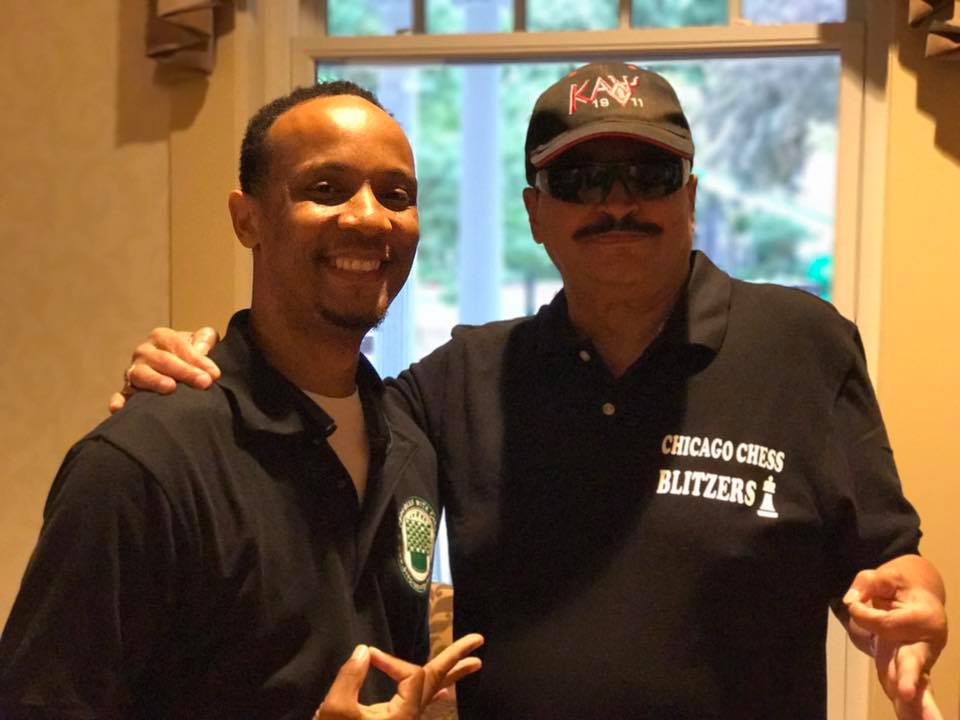 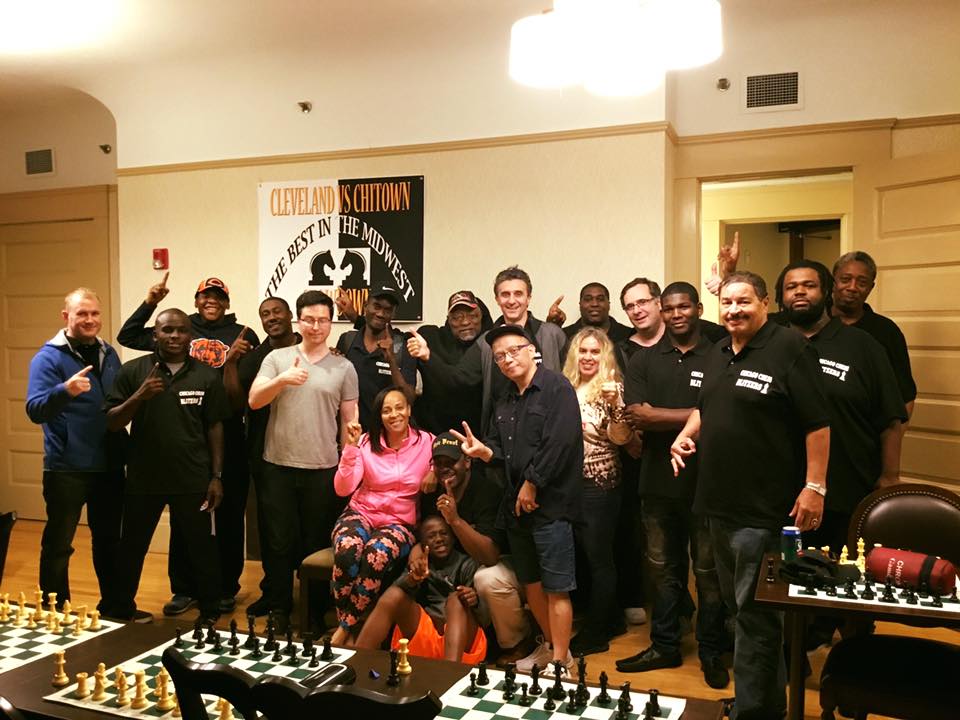 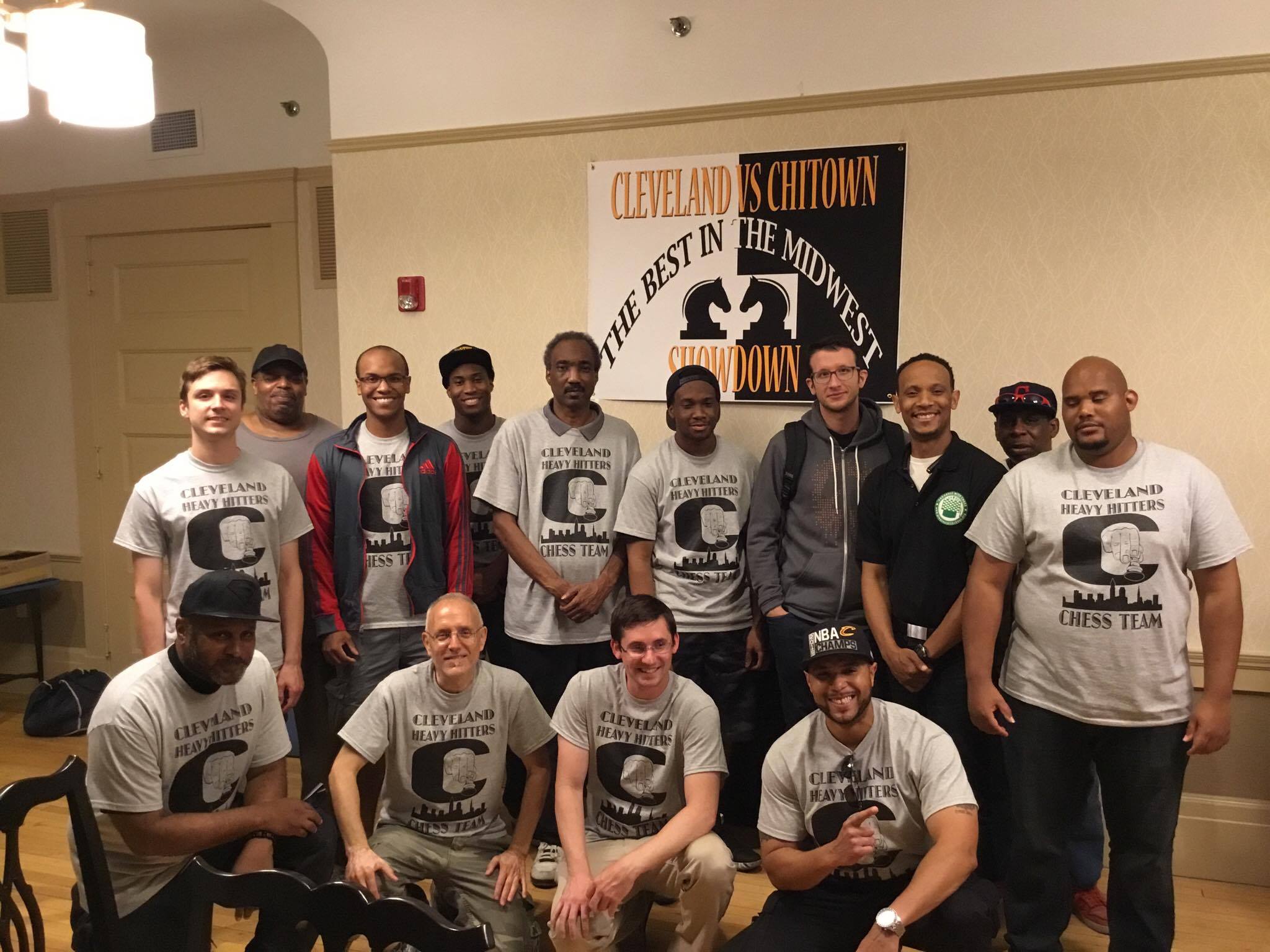