The cream is starting to rise to the top as the round of “Sweet Sixteen” featured marquee matchups. There were the young hopefuls hoping for another upset and veterans hoping to keep them at bay. Former champions Alexandra Kosteniuk and Antoaneta Stefanova will try to reclaim the title while several elite Europeans and a contingent of seven Asians vie for the crown.

In the first game, there were victories by Anna Muzychuk and Nana Dzagnidze, but the win by Stefanova ended in a bishop and knight mate.

There is a B+N+K vs. K in Stefanova-Khurtsidze at #WWCC2017. Let's watch the Bulgarian execute it! pic.twitter.com/VnSEf7xKTQ

Nino Khurtsidze played on, but it was apparent that Stefanova had the technique and got the formation to execute the “W” technique.

One key formation in the B+N checkmate. In this technique you can let the king off the back rank only to drive into the right corner. pic.twitter.com/7D80KRUiHU

The idea is to get the same formation on the h-, f-, d- and b-files. You lose a tempo, deliver a check with the knight and then checkmate with the bishop on a1. Interestingly enough, Khurtsidze resigned instead of allowing the checkmate. The question being, why test your opponent’s technique until two moves before mate then deny her the chance to present it?

Most of the favorites were winners of the matches, but Natalija Pogonina was sent home by 19-year old Ni Shiqun of China. Ni, who admires Boris Gelfand, won the second with a powerful performance. She stated that she never had an idea that she would be close to a championship title, but faces former champion Alexandra Kosteniuk who beat the legendary Pia Cramling. There would be four tiebreaks to decide the quarterfinalists. Dronavali Harika, who is one of the favorites to win the crown, would have to go to tiebreaks to keep her dream alive. 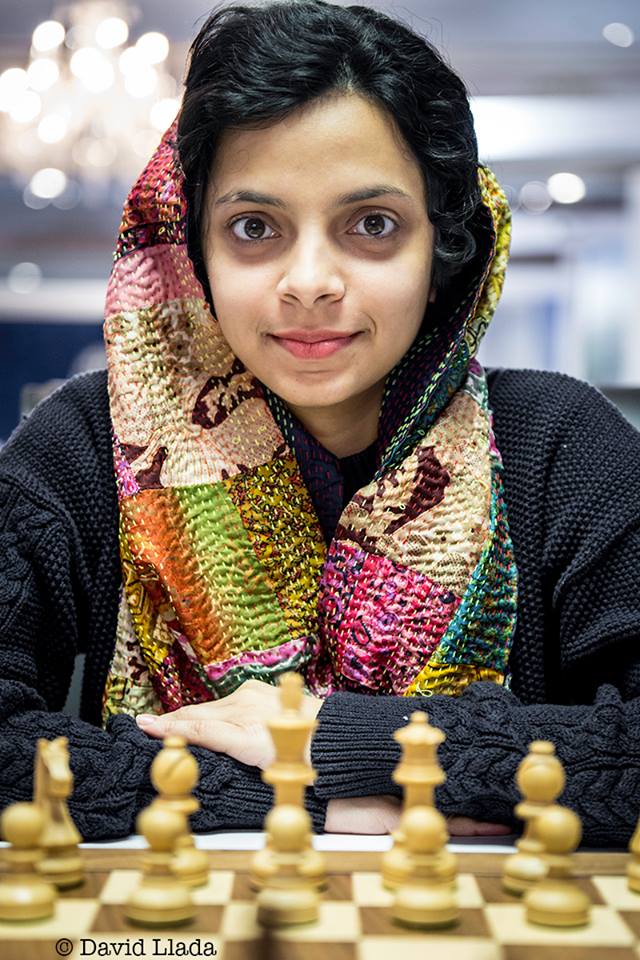 The tiebreaks were very tense with Ju Wenjun and Olga Girya trading wins in the rapids and the Chinese player winning in the last 10+10 game. Tan Zhongyi who had lost the first rapid game against Padmini Rout and had to bounce back quickly in the second and promptly equalized. Rout played a horrible opening in the second 25+10 game and was crushed. In the first 10+10 game, Rout sacrificed an exchange, but did not get enough compensation and was behind a game. In the second 10+10, Tan played the Pirc Defense and equalized easily to become the third Chinese player to advance.

You can feel the mutual respect between Cramling and Kosteniuk, who have played countless games along the past two decades pic.twitter.com/fLf383EzB7

Alexandra Kosteniuk who won a thrilling encounter over Pia Cramling when the Sweden blundered in time pressure of the first 10+10 game. In fact, Cramling was an exchange for a pawn with clear winning chances when disaster struck. Cramling was trying to get the queens off the board, but lost her sense of danger in time pressure after 47.Qd2?? Kosteniuk belted out 47…Qf1+ 48.Kh2 Be5+ winning back the exchange. White’s exposed king was defenseless as black gobbled up two more pawns and developed a deadly battery on the diagonal. Cramling resigned. Heart-breaking loss for the Swede, who always charms chess fans for her humility and graciousness.