The 2nd Emory Tate Memorial took place at the Lion’s Den Chess and Martial Arts Academy in Chicago on a gorgeous summer day. There was excitement building up for the tournament along with the buzz of the pending match between Daniel X Jones and FM James Canty. Excitement for chess is high these days on the south side of Chicago. Unfortunately, the turnout was not as large as expected. Initially, eight players registered with Zambia’s Kela Kaulule being the top seed. Twelve players in total participated. Gwayne Lambert won last year’s event of 14 players. 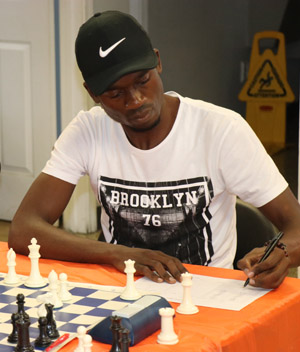 Kaulule has been in Chicago the last month visiting a relative and has been adjusting to the U.S. chess scene. While stating that he played “badly” in the Chicago Open, he scored a respectable 4.5/7 in the under-2300 section. The Zambian native was challenged by the second-seeded Daniel X Jones. Jones, a third-degree black belt and owner of the martial arts studio, has been a positive force on the southside for mentoring his students and for promoting both chess and martial arts.

Jones, who is married with three children, told The Chess Drum that the recent buzz in Chicago chess is certainly helping to lift the profile of the game. “I love the ideas Maurice Ashley put on the table, and I want to partake in revolutionizing chess. So much so that chess “professionals” can be devoted and make a living full time,” said Jones. The Tate Memorials have certainly been a boost, but of course, the groundswell is still in its formative stages on the southside. 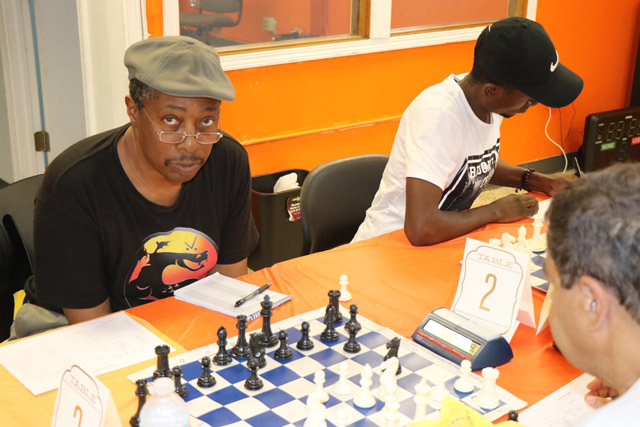 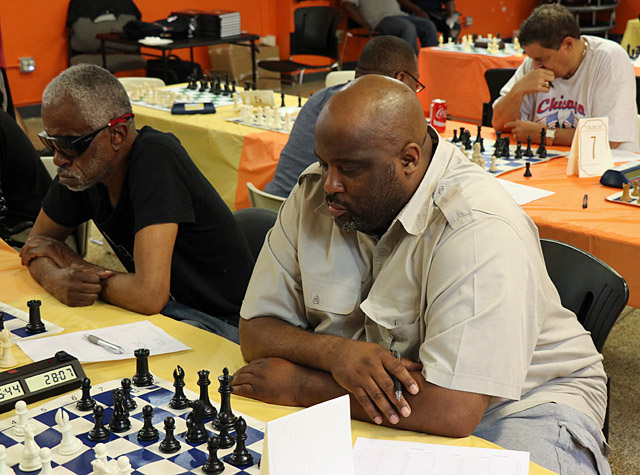 The tournament had a number of visitors including a local master, Marvin Dandridge. Some came from long distances to participate. Stephen Faulkner drove four hours from Louisville, Kentucky to be a part of chess movement and also to meet some of his chess contemporaries.

There were some very tense moments in the tournament including the second round showdown between Kaulule (2240) and Jones (2074). Jones, playing black, won a pawn right out of the opening and seemed to be holding his advantage throughout the middlegame. 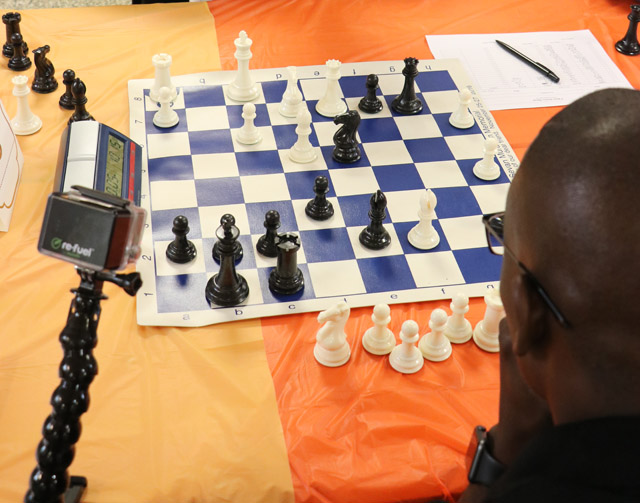 In the second round marquee matchup Kaulule-Jones, black sacrificed a piece for a dangerous passed pawn. After …Nd4, white has to proceed with caution since Kf2?? would lose to c1(Q)! What to do?

The game’s intensity ratcheted up as the Zambian was fighting to hold the position. Interestingly, it was discovered that Kaulule missed an opportunity to simplify matters earlier and end up a full piece! As it turned out, the game got complicated, and white had to return the piece and fought to draw the position. Great battle!

In the third round, Jones-Murphy and Ford-Kaulule were going to be grueling battles and would most likely set the stage for who would take the top positions. Jones prevailed over Murphy while Kaulule was in a pitched battle with Chicago’s blitz legend, Sam Ford (1929). 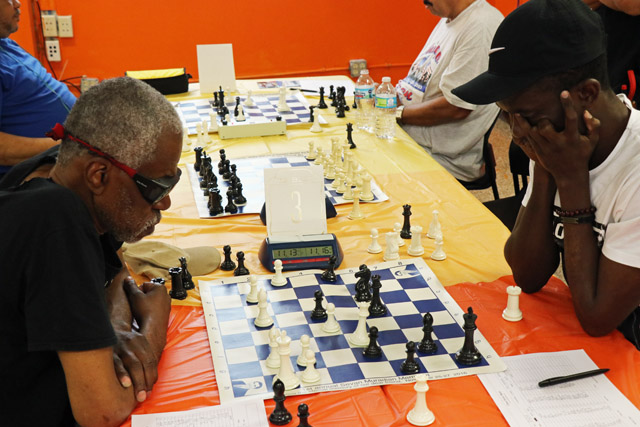 Sam Ford (left) on the move and possibly examining e5! He didn’t play it, but it would have led to dynamic complications.

Ford went astray at a critical moment and Kaulule’s victory moved him into joint first with Jones and Tim Donnahue (1915) with 2.5/3. Before the last round, lunch was served and there was presentation of Triple Exclam, the Emory Tate biography written by Daaim Shabazz. In last year’s inaugural event the book was in the production phase. The book was officially released to the public in March.

Shabazz spent time recounting key moments in Emory’s life as well as some of the highlights of the book. There was a bit of nostalgia in giving tribute to one of the most colorful and artful figures in America’s chess history. The recurring theme was Emory’s contribution of chess as an art form and his eagerness to show its infinite beauty. 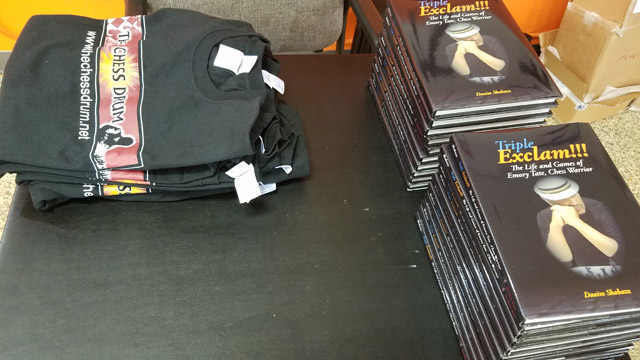 Angelo Armistead came to the tournament to get his signed copy! Both Armistead and Shabazz competed in tournaments together back in the 80s. Armistead is one day older!

In the final round, Jones would face Donnahue who had beaten Madison Loftis and William Cuevas. Kaulule would play Murphy who was trying to recover from a tough loss in the previous round to Jones. Tension was thick in the air, and there were spectators milling around the boards. 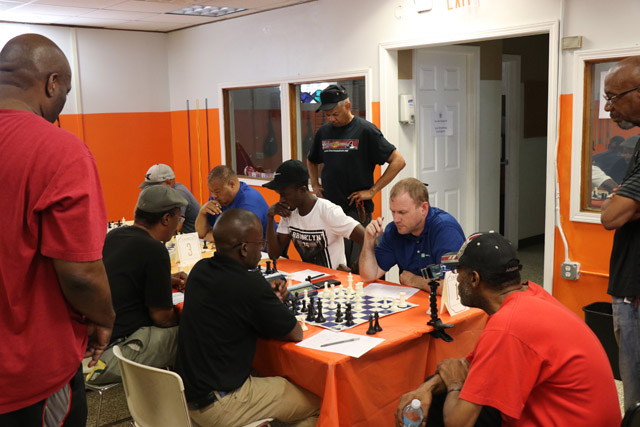 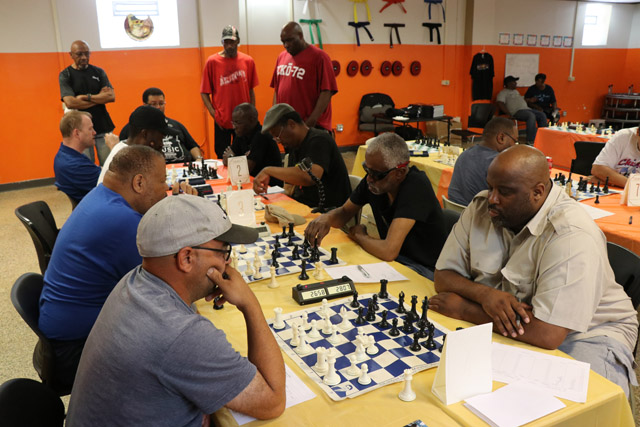 Both Jones and Kaulule were able to prevail in tough games to tie for first place with 3.5/4. There was a little matter of the tiebreaks, but both received trophies as joint champions. It was a great event, but the number of participants was below expectations. On the eve of the opening of the new club, there has to be sustained support to keep the activity going on the southside. The memorial tournament hopes to be bigger and better next year and will most likely be in the new location. Thanks to Daniel X Jones for hosting the event, Nathan Kelly and Edwin Walker for directing, and Roger Hickman who provided sponsorship. 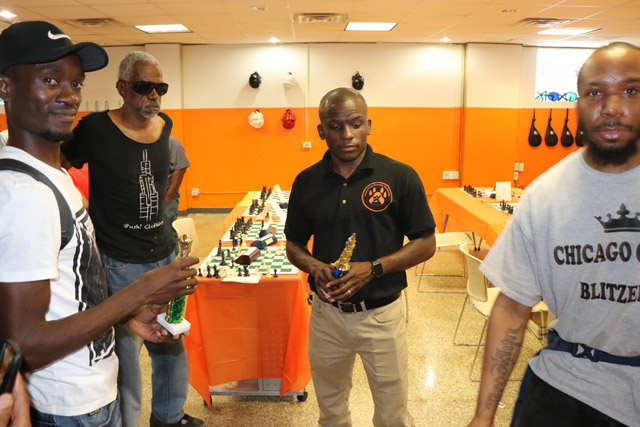 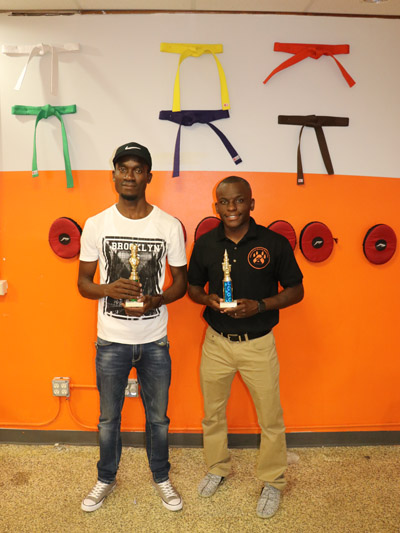 Beauty of Africa through a Chess Lens