The first game of the semifinal matches began with a bang. Two Asian competitors faced off and in the other match were players from two European chess powers. Dronavali Harika and Tan Zhongyi (with surnames first) started off calmly, but it appeared the Indian played too cautiously with her Nimzo-Indian. Essaying a solid setup, the Indian player played 14…Ng4!? The move looks like a one move cheap shot as it threatened 15…Bxf3 and 16…Qxh2 mate, but the idea was to force white to commit to playing h3 and weaken the kingside a bit.

Dronavali seemed to wander with 20….Qa6 and the queen and Tan grabbed more space. While white had a weak pawn structure, black had a flexible formation and few worried, but after 23.Qg4, white’s intentions were clear. They repeated moves twice, but the Chinese continued to forge ahead with the ambitious 26.Re4. Even though this move is apparently dubious, it has psychological value. Engines don’t like it, but they have no emotions. It is certainly a menacing move. 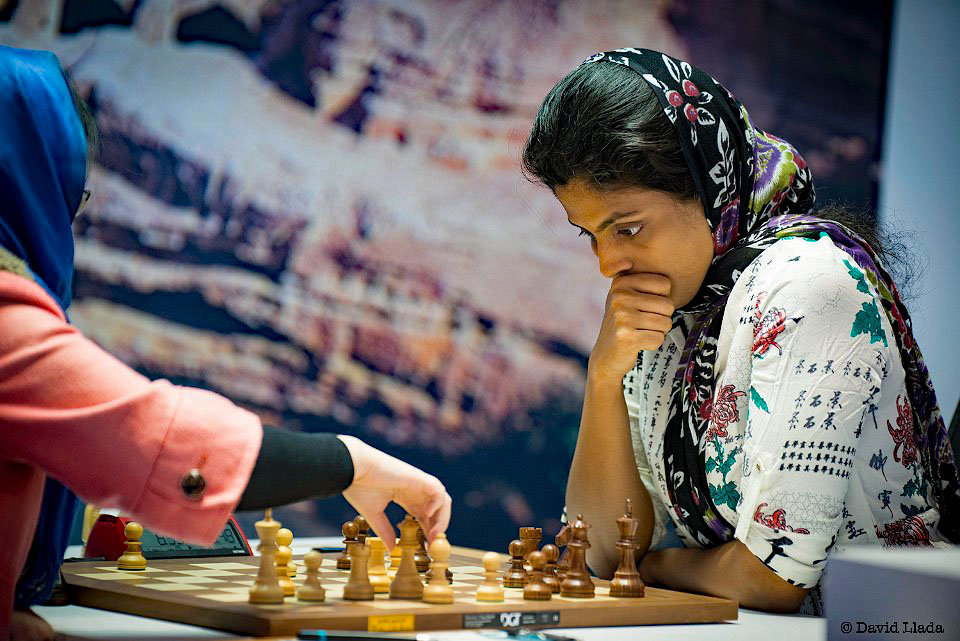 The black queen kept flailing away on the queenside, not fully appreciating the pending trouble. Before Dronavali realized her peril, she had to scurry the queen with 33…Qh7, literally guarding the king. It wasn’t enough. Tan played 34.Rf4, and at this point, the Indian knew she was in grave danger. She tried to solve her problems tactically, with 36…Nd7, hoping for 37.Rxf7 Qb1+! 38.Kh2 Nxe5 when 39.Rf8+ Kh7!-+ However, the Chinese player maintained the pressure. Finally, the black queen became entombed the white rooks, and the finishing blow came with 44.Rxh6! Dronavali resigned and must win to continue her historic quest.

Anna Muzychuk is the reigning women’s blitz and rapid champion and is trying to win the classical. She would repeat the feat of Magnus Carlsen who held three such titles at once. The Ukrainian did not get off to a good start, and it appeared she would have problems holding the position. Alexandra Kosteniuk got a favorable position out of the opening but no decisive advantage. Both players made some inaccuracies as time pressure loomed, but Kosteniuk missed a few knockout blows such as 32.Bxg7, 33.Bc5 and 34.Be3!

Nevertheless white had a pawn edge (after 41.Nxe6!) to go along with a queenside majority. Inexplicably, Kosteniuk continued to make mistakes. On 56.Ne5?? Muzychuk found 56…Ng5! and now the tide turned. With the devastating Rxe5 threat, white had to cede a pawn. After 57.Rb3 Nxh3+ 58.Kh2 Nxf2! black is up a pawn. Muzychuk pocketed another pawn after Kosteniuk played 60.Qb2? She probably was still in shock at the turn of events. The game ended swiftly after 64…Rf1 as white would suffer massive losses after 65.Kh1 Qe6! Kosteniuk will have to rebound to keep Russia’s hope alive for a championship.

Today’s games were must-win situations for both Dronavali and Kosteniuk. There were two Siclians today as Dronavali-Tan was a Rossolimi and Muzychuk-Kosteniuk was Sicilian Taimanov. Incidentally, Dronavali turned the position in a type of Ruy Lopez structure, but Tan overextended on the queenside and dropped a pawn. Tan sacrificed a pawn for counterplay, but Dronavali returned the pawn.

Fatigue must be setting in because Tan dropped another pawn after 40.Nxa5 and white was now clearly winning. Suddenly the Indian player launched at attack after 50.h5 gxh5 51.Qc1 (or 51.Qc7!), but the game got a bit murky. Dronavali missed mate after 56…f5?? For example, 56.Qe7+! Kxc8 57.Bd3! White still carried the advantage but needed the services of her passed pawn.

The queens came off, and black had to sacrifice her pieces to stop the white pawns setting the stage for another bishop and knight mate. It may be the first time in awhile that we’ve seen two in one tournament. Dronavali showed some poor technique in executing the maneuver and allowed the king to escape a few times before getting the right formation and delivering the mate. As in Stefanova-Buska, the mate was not allowed. 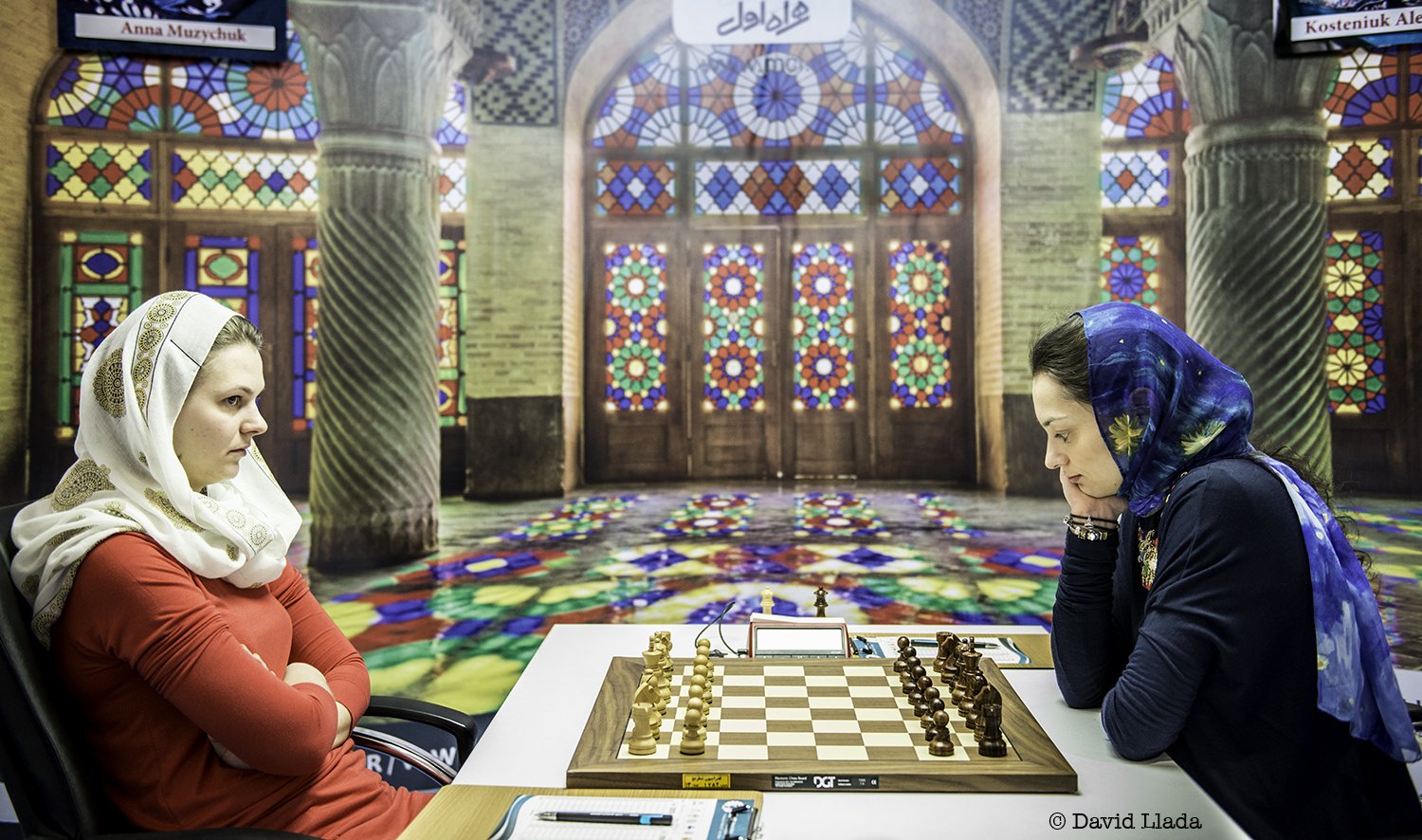 Anna Muzychuk and Alexandra Kosteniuk prepare to play with an inspiring background. Photo by David Llada

In the Muzychuk-Kosteniuk game, the Russia misplayed the opening and there followed a Maroczy Bind set. Kosteniuk played the speculative 6…Bc5 instead of 6…Bb4 and never got close to equalizing after 7.Nxc6 bxc6 8.e5 Ng8. With only a draw needed, white swapped queens and there was no hope to win for black. In fact, white was better with an advantage in space and the two bishops. It was simply a smooth win for Muzychuk as she closed the match and will try to win the “Triple Crown” in the finals.

The tiebreaks between Dronavali and Tan were epic. There were three occasions where a win was needed to stave off elimination and it and was delivered. The first game was a complete disaster and Tan simply had not focused and was demolished in 17 moves. The simply 12.Qh4! wins a pawn as black’s knights are in awkward positions. The ensuing attack looked like something out of a blitz game in a coffee house.

In the second rapid game, Dronavali appeared to be heading toward a draw and thus, advancing to the finals. The game evolved into a knight ending with have to be treated with care. Some opine that they are more like pawn ending in that tempos are extremely crucial. There were a number of missed opportunities as the Indian was trying to avoid getting into zugzwang. However, there were a comedy of errors made between moves 40-50 with 49…Kb5?? being ultimate. After that, white picked off pawns and use her a- and h-pawns with great effect. Unfortunately, minor pieces can’t effectively defend both sides of the board and Tan had leveled the score.

In the ten-minute games, the game was mostly equal until Dronavali got her pieces tangled up when trying to shield her exposed king. White’s 54.Qe3 required 54…Re7 when Ng6 would cover everything. However, 54…Qf5?? was played and 55.Nd3 wins a piece. Fatigue was certainly becoming a factor. Tan finished the game with a cute mating sequence. So Dronavali had to win again.

Lots of tension in the Dronavali-Tan tiebreak match. What a battle! Both players mediate before second 10-minute game. #WWCC2017 pic.twitter.com/w6kKCfYQk7

In the Lowental variation, the Indian was not playing the most testing lines and Tan got comfortable equality. Dronavali sacrificed her queen for a rook and bishop believing she could gang up on black’s weakened pawns. It appeared that the active queen was more than capable of disrupting the coordination of the pieces. Nevertheless, the position was dynamically equal until Tan began wandering her queen around the board flailing at secured targets.

After 61…Qe5+ Dronavali got her break! On 66.e5! Qg6?? the tide had turned. White basically shouldered the queen away and started advancing both the b- and e-pawns. The checking queen chased the white king to no avail and Dronavali had equalized again!! Amazing comeback!

Harika Houdini!! She squeezes a win out of nothing & we're going to 5-minute blitz games: https://t.co/CVbeBHngQb #c24live #WWCC2017 pic.twitter.com/mkv78COAd4

Comparatively speaking, the two 5-minutes games were uneventful and they were drawn. It is uncertain why Dronavali kept trying the Lowenthal when she was not getting an advantage. The Armageddon game would the last of a tense and thrilling match. Both players were completely exhausted as the level of play was deteriorating. In the coin toss, Tan got the choice and chose black and four minutes. This mean white had to win the game. Since Dronavali had not shown anything with white, it was a prudent choice.

This time the game started 1.Nf3 and went into a type of King’s Indian Attack. Tan actually dropped a pawn with 31…Nhf6 32.Nfxe5. The problem was that white had to win. Tan made a few mistakes in assessing the situation and thought that the queen ending would easily be drawn. She actually blundered with 54…Qh3 when 55.exf6+ Kxf6 56.Qe5+ wins.

After black’s 56…Kf7, Dronavali panicked and played 57.Qe1?? Black even repeated the losing position meaning she was encouraging white to find the winning plan. She didn’t find 57. Qf5+! or 59.Qf5+! which leads to a trade of queens on the h4-square. Play was fast and furious with white trying to break through. She had another chance, but was running dangerously low on time.

On 66.Qd6+, black repeated moves twice so on 68…Kf7, white should play 69.Qe6+ and forcing a trade of queens on the h4-square as in the previous line. After 20 more moves both had taken pawns and tried to race passed pawns to the queening square. However, both queens on an open board were defending and attacking, neutralizing. Dronvali queened. Tan queened. In the final position, it would have been drawn, but the Indian GM had lost on time.

Painful exit!Will keep haunting for time to come & letting you all down.Failed to change the colour,its the third ????in a row at the #WWCC2017

Dronavali was distraught after the match feeling that she had let her country down. Not at all. She played every match until tiebreak and deliever a bishop and knight mate in 162-move game and staved off elimination a number of times. Her performance was truly courageous. Viswanthan Anand had also tweeted words of support.