The chess horizon has been quiet since capping off a busy year with the Grand Chess Tour. Last week, I started wondering about 2018 chess year. Apart from the Alpha Zero buzz and the firestorm over the World Championship logo, there hasn’t been much in the way of chess news. What is also very strange is the lack of information concerning candidates in FIDE’s Presidential election next year in Batumi, Georgia.

There has been one announcement of a candidate and it is the incumbent Kirsan Ilyumzhinov who seems to be serving as FIDE President in name only. After being sanctioned by the U.S. Department of Treasury last November 25th, he could not make an appearance at the 2017 World Chess Championship last fall due to the sanctions. He then transferred his authority to his Deputy President, Georgios Makropoulos.

In addition, his authority was radically reduced in a no-confidence vote by the FIDE Board. There were rumors that he had resigned and it was posted on the FIDE website. These reports were later rebuffed by Ilyumzhinov. What the hell is going on?? There were questions of whether a coup d’etat had been executed. Those reports were denied by FIDE. Jamaica’s Ian Wilkinson, an attorney who stood with Garry Kasparov in his failed bid for FIDE President, filed a petition calling for the removal of Ilyumzhinov because of sanctions.

“I want to continue uniting the chess world. I will be working towards my goal to have one billion people playing chess.”

Last month Ilyumzhinov announced that he was running in the 2018 election for FIDE President. There has been no announcement of a opposing candidate, but it is less than a year away. Georgios Makropoulos is the Acting President despite the fact that Ilyumzhinov still operates in the capacity of the FIDE President. He has appeared at tournaments making presentations to winners. 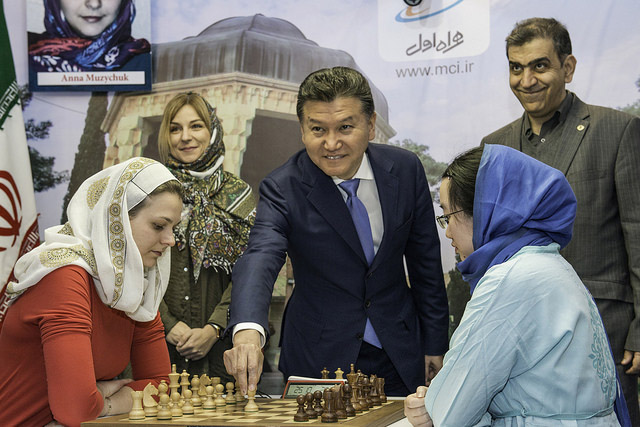 When asked about the situation, Makropoulos told chess.com,

“At the last meeting of the Presidential Board, it was a unanimous conclusion of the members that Kirsan should not run in the next elections. This opinion had already been expressed by several Presidential Board members during the General Assembly in Baku 2016—except myself—I remember clearly Israel Gelfer and Jorge Vega. (link)

This begs the question, “Who else will enter the race?” Over the past 12 years, three candidates (Bessel Kok, Anatoly Karpov and Garry Kasparov) have attempted and all three were soundly defeated. Is there a sense of helplessness in potential candidates? FIDE appears to be operating under a cloud of uncertainty. Ilyumzhinov has announced his candidacy, but it’s not certain if he is eligible. If he is not, then what happens? Does Makropoulos assume the position? It will be a very chaotic situation since federations have to prepare for the political season and have enough information to consider the alternatives.

Will someone emerge? Perhaps the strategy would be to keep any aspirations undercover to prevent any preemptive moves by competition. The last election in 2014 was extremely bitter and tore some federations apart. In fact, Africa was one region that suffered. It was a pitiful sight. What will the future hold for FIDE with the Olympiad, Presidential Election and the World Championship less than a year away? Can we look to a more civil process? With an embattled President barred by sanctions and no viable election slates to come forward, it should be an eventful 2018.

Elections are less than a year away!