Jones-DeJesus has the ring of a championship boxing match. After months of fierce trash talk, taunts, diss videos, Daniel X Jones decided to ditch his “Baby-Faced Assassin” label for the more ominous, omnipotent label of “God.” Immediately causing a lot of controversy, he continued with the theme coming to the match with a shirt emblazoned with “I Am A God.”

It’s always a tall order when “El Bandido” is trying to box with a god. In fact, there was once a Broadway musical titled, “Your Arms Are Too Short to Box with God.” Jones seems to be playing the role of WWE star CM Punk who foils The Rock…

National Master Jeff DeJesus was amused that his holiness had even posted his obituary. “Boy I was gonna have mercy and let you win like 2 games in front of the fans but now you will feel the strength,” said DeJesus. Blows were being thrown even before the clock was pressed. Both players had pre-match interviews with the Chicago Chess Club. 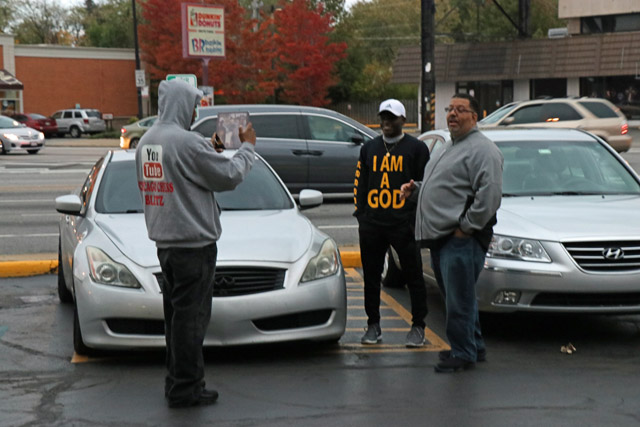 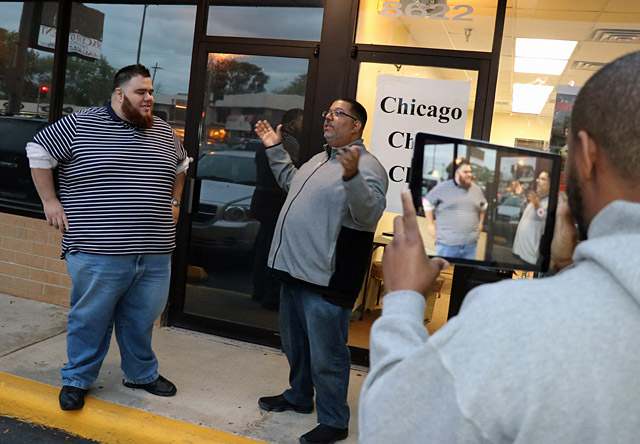 After all the buzz, it was time to play chess. Both sides determined the set and the clock to be used in the tournament. DeJesus played some warm-up games against Tom Murphy. Before the match, The Chess Drum also got a word from the two gladiators… 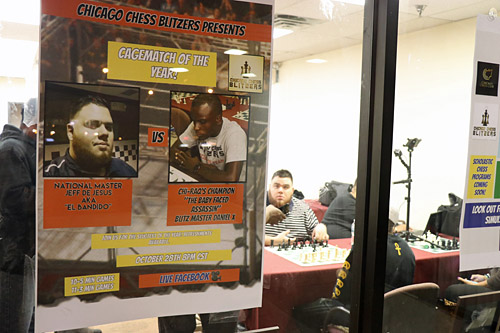 Both Jeff DeJesus and Daniel X Jones get instructions before the showdown. 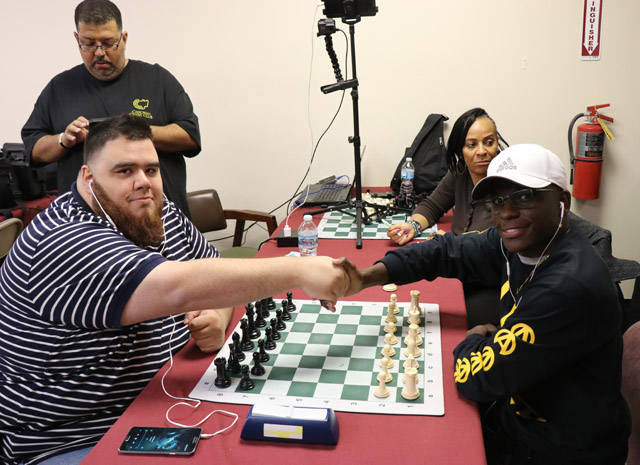 Would DeJesus’ arms be long enough?? 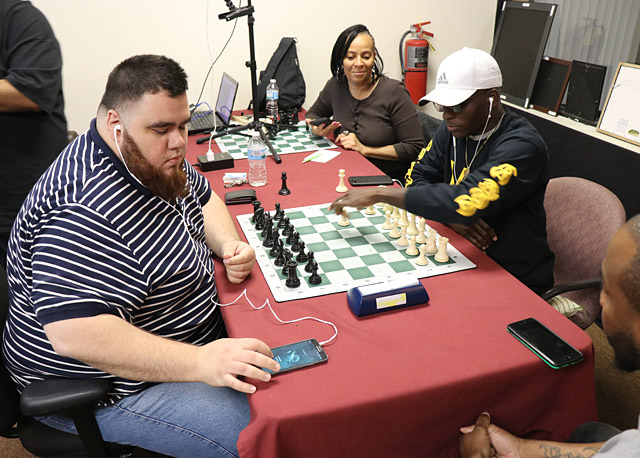 The match started with fireworks with DeJesus taking the first four games, all hotly-contested. Jones was trying an interesting version of the Smith-Morra Gambit 1.e4 c5 2.d4 cxd4 3.c3 dxc3 4.Nxc3 Nc6 5.f4!? There was a debate about this move order in social media with National Master Menon Gopal scoffing at it.

Suffice it to say, Jones had a lot of confidence in this line and played it several times in the match. However, in the first game Jones played 1.f4 and the game evolved into a tense struggle. In the end, it appeared that Jones had a bishop-queen mating attack. As he tried to deliver checkmate, his king was already in check! Illegal move… DeJesus would draw first blood.

The second game was also a furious time scramble after terrific middlegame complications. The third was an f4 Smith-Morra that didn’t break through. There was a nice tactical sequence in the middlegame (involving b4 forking rook and knight) that ended in a R+P ending. DeJesus won that game going up 3-0.

DeJesus had made a video about the bullet match he and Jones played. In many of those games, he was content to trade and head for the endgame. During this match, he employed 1.e4 c6 2.Nc3 d5 3.g3!? against Jones’ Caro Kann. The fourth game started in this fashion and white kept an edge toward the ending. It seemed as if black was holding when Jones overlooked an Arabian mating sequence. 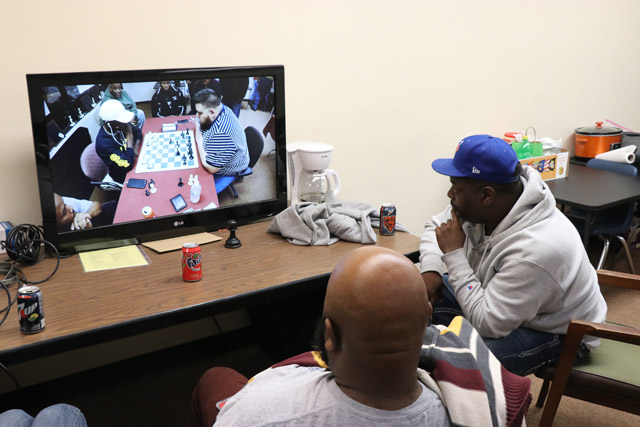 There were many ways to watch the action, but… 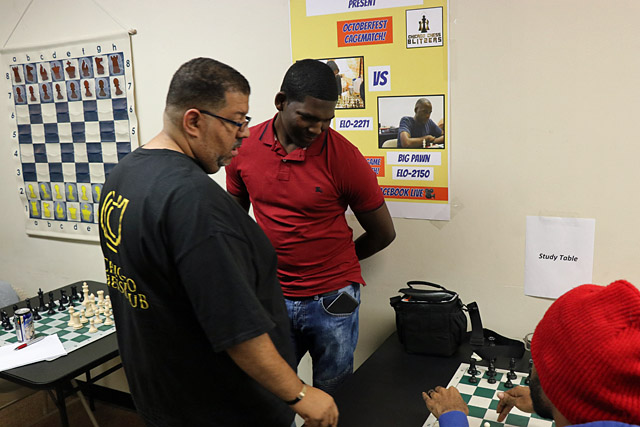 Now at 4-0 the Facebook viewers started to make jokes. Despite the deficit, Jones appeared to be composed as the technical team ironed out some issues with the camera angle. The clock was not visible to online viewers due to the glare, but neither player wanted to switch clocks. The fifth game was another Smith-Morra (5. f4) by Daniel X and it ended with a nice tactic.

After Jones broke into the win column, there was some cheering “let’s go” from the hometown supporters. The sixth game went into an ending within the first 10 moves and was fairly equal. Then all hell broke loss. The seesaw battle resulted into a pawn race with DeJesus promoting and then dropping mate on the board increasing the lead to 5-1. Game seven was probably Jones’ best of 5-minute segment as he got a blistering attack and mated DeJesus with the Smith-Morra line. 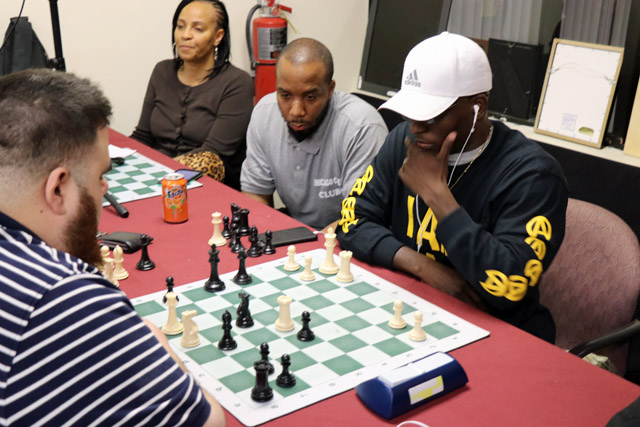 Jones breaks through in the 7th 5-minute game with a mating attack.
After Rd5+ DeJesus resigned.

Devastating loss for DeJesus, but he was still up 5-2. Would Jones turn the tide? Game 8 had an interesting sequence after …Bxf2. DeJesus played Bxd5? which looks good, but Jones could play Bxg3+! Kxg3 Qd6+ and Qxd5 exposing the white king. He opted for Be3 Rb1 Bxh3 still winning a pawn and obtaining the advantage. Jones kept up the pressure, but flagged in a winning position. DeJesus went back up to +4 at 6-2.

The ninth game saw a “Greek Gift” sacrifice with Bxh7+ but black had clear defensive resources after Kxh7 Ng5+ Bxg5 hxg5+ Nh6 gxh6 g6. It appeared that black was holding, but then blundered an exchange after getting rook skewered. It was downhill from there and Jones got the point. DeJesus still was up 6-3 with one left in the five-minute segment. The last game was roughly equal throughout and after a time scramble was drawn.

So the five-minute segment was won by DeJesus and now there would be a 10-minute intermission for the players to refresh themselves and get encouragement from friends. There were a number of bets taken on whether DeJesus could win five games in a row, three games in a row and other side bets. There was still skepticism on whether Jones could mount a serious challenge, but with the three-minute segment touching 11 eleven games, he would have plenty of time.

The first three-minute game was another Caro Kann with 1.e4 c6 2.Nc3 d5 3.d3 d4 4.Ne2 e5 5.g3. This system has its own bit of venom, but Jones had a solid position against white’s imposing center. Black seemed totally tied up, but then DeJesus hung a pawn on d4 and the tide turned! While white’s rooks were doubled on a blocked f-file, black’s doubled rooks were rampaging on an open b-file. In a time scramble, Jones won on time in drawn R+P ending.

After winning the first game, Jones got on the wrong side of a miniature that lasted all of one minute.

Now… 7½-4½ DeJesus. Jones shook that loss off and pulled to within two when during the time scramble, DeJesus made an illegal move rook from h6 to a7. 7½-5½ DeJesus. The next game was one of the best in the series, but ended in a draw when both flags were down. Tremendous fight by both! 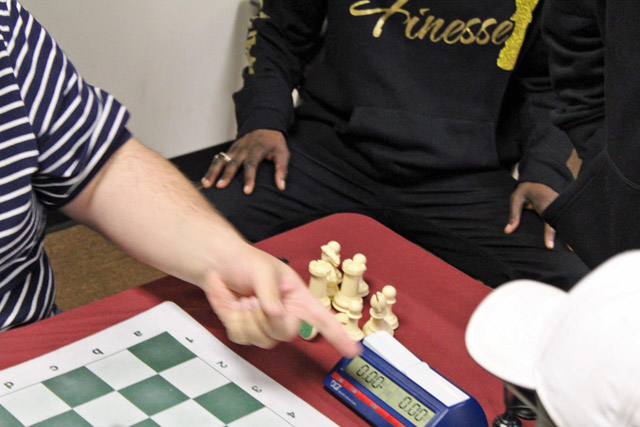 The score was now 8-6. In the 15th game, there was the first controversy of the match. During a serious time scramble, Jones had offered and draw which was declined. Both players were moving rapid fire when Jones time ran out. In the final position, DeJesus had a rook vs. Jones bishop and pawn.

The question was whether Jones could have claimed “insufficient losing chances.” There was no clarity on this ruling since it has not been discussed before the match. It turns out that Jones could have stopped the clock and made the claim, but kept playing and lost on time. DeJesus now up 9-6.

According to the rule book, if you remove time as a factor, and the player that’s able to demonstrate that he cannot make progress, then the ‘insufficient losing chances’ will be upheld.

There was a question as to whether Jones could’ve claimed a draw due to “insufficient losing chances.” Jones was not suggesting that the result be overturned, but for clarification wanted to know the ruling. Organizers put in a call to National Tournament Director Frank Johnson for verification.

While they were attempting to get through to Johnson, Game 16 was another case of Jones again falling prey to a blindspot. In another Smith-Morra with 5.f4, DeJesus again equalized with 9…d4 10.e5 d4! DeJesus had the tactical 13…Nf3+! exposing the white king. The monarch scurried to the queenside with black pieces in pursuit. Under a blistering attack, Jones tried to counterattack, but hung his queen. Now DeJesus had tied for his largest lead at +4 at 10-6. One more win would clinch victory.

At the brink of defeat, Jones came roaring back. He trotted out the Latvian Gambit after 1.e4 e5 2.Nf3 f5. This was the first time this had been played in the match and seemed to catch DeJesus off guard a bit as he seemed to have some indecision about how to attack black’s unorthodox position. Both players developed outside passed pawns and the race was on. DeJesus miscalculated and sacrificed a rook in order to promote his passed a-pawn to a7, but was one tempo late and Jones’ queened first! After that the black queen cleaned up… 10-7. Jones still had a chance, but would have to win four straight. 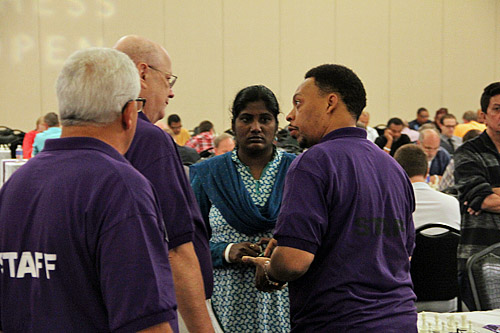 Atlanta’s Frank Johnson (right) was called to weigh in on the situation.
Photo by Daaim Shabazz

In the next game it was the Alapin, a very tricky anti-Sicilian opening with its own venom. DeJesus played well and got the clinching victory.

So DeJesus clinches the match! Of course, there were no cheers given and the club was a bit quiet. However, the last three games would be played for prosperity. It was apparent that DeJesus felt more relaxed and and the tension lifted, but of course pride was on the line. Given all of the predictions of a big win by DeJesus, a 14-7 victory would still be convincing enough.

Jones ended up winning the last three games… with black in a Three Knights Game (1.e4 e5 2.Nc3 Nc6 3.Nf3 Bc5 4.Nxe5 Bxf2+), with white in an Alapin and with black in a Philidor. It’s unfortunate that the tension was released and many discussed that there be an incentive so the remaining games would not be deemed as insignificant. There was a suggestion of rating the games, but they would all have to be five-minute games. Nevertheless, it was an exciting match and good sportsmanship was on display.

So in the end DeJesus prevailed 11-10 (6½-3½ in 5m and 4½-6½ in 3m). While DeJesus clinched the match at 11-7, the notion that the last three games were not important would be dubious. It is true the last three games suffered in quality, but they were still hotly-contested.

Maybe next time I can play a better match.
~Jeff DeJesus after his narrow victory

During the press conference, both talked about how the cage match idea blossomed from the online banter. Club President Roger Hickman asked about the emergence of blitz chess and both stated that it would be an integral part of the chess scene, but perhaps would not replace classical play.

The question of the pre-match predictions was raised and DeJesus mentioned that while Jones played well, he felt some disappointment in his play. There was a question about whether chess would be featured as part of the Olympics. This is an never-ending debate that has been discussed around the world and at FIDE Congresses. DeJesus said that if chess had a part in the Olympics it would have to be blitz since in other sports they are rather quick and decisive. It’s an interesting debate and thus far there are good points on both sides.

DeJesus was asked about his tailing off at the end. He cited fatigue as a factor in his play and stated that once the match was clinched he didn’t have the motivation. When Jones was asked what he did to refuel after losing the 5-minute segment, he stated it was a process of assessing opponent’s style. During the 3-minute segment, Jones was never able to put together any consecutive wins until the match was no longer in question. Thus, those first four or five “feeling out” games may have been riskier than anticipated. 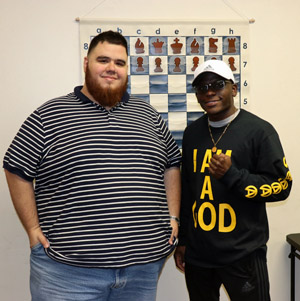 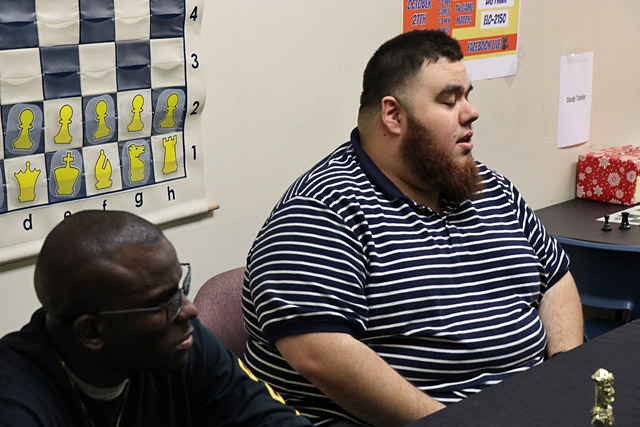 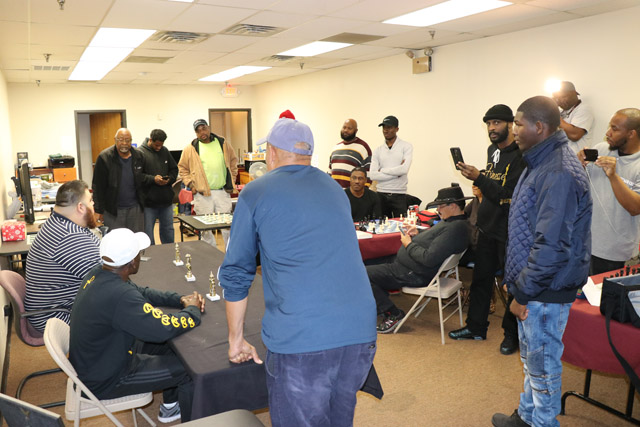 Overall the match got rave reviews with one major complaint… viewers couldn’t see the clock due to the glare. That will have to be fixed in future matches. Another issues were some of the rules that need to be set before the match, but there were not major controversies. There should be another incentive to keep the tension in the match such as a certain amount of cash for each win or rated games. 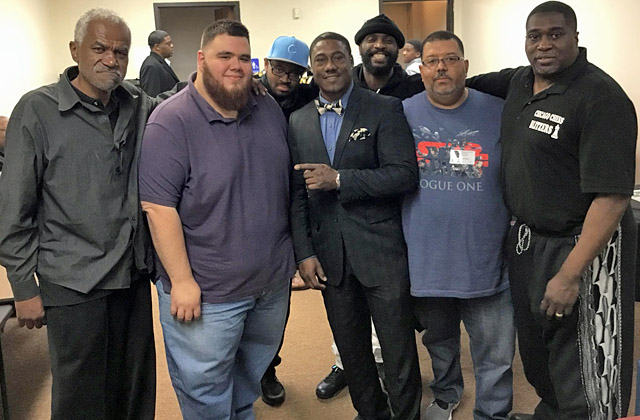 DeJesus hanging out with Chicago Blitzers