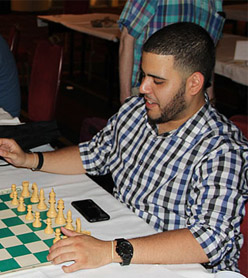 The time has arrived. After months of banter and trashtalk, this evening will mark a hotly-contest blitz battle featuring two marquee cities. Chicago Chess Blitzers, who are sponsored by the Chicago Chess Club, have begun the overture by traveling to Brooklyn. Daniel X Jones and Kay Kaulule were caught live on Flatbush Avenue and had a message for the audience… and for their opponents Shawn Martinez and Tyrell Harriott.

This comes after another video circulated on Facebook with New York players asserting their supremacy as a chess city. Of course, New York’s pedigree is unmatched as far as history, but that is happening now is the beginning of another tradition. With the growth of technology, it is possible to reach so many different corners of the chess community and the blitz community will be watching this with with their snacks.

“At the end of the day on September 9th, Shawn Martinez is going to handle business for New York and represent the truth about who’s better.”

New York had upped the stakes after this video featuring owner of New York Chess and Games, Christian Whitted sparring with Nathan Kelly, organizer and catalyst for Chicago Chess Club. Shawn, Donell and Chris also chimed in. It was a brutal assault. They referred to Chicago as “Chiraq,” a moniker coined by Brooklyn’s Spike Lee and seen as an insult by Chicagoans.

Kelly, a Brooklyn native, survived and held his ground, but Christian was also adamant. New York would win in a rout and be the victor in the September 9th match! So.. here we are… it’s September 9th! Who will it be? Who will win home court advantage for the upcoming New York-Chicago showdown? Will it be Shawn “The Silent Assassin” Martinez or Daniel “The Baby-Faced Assassin” Jones. New York is only big enough for one assassin. So gentleman… take your seats… shake hands… FIGHT!