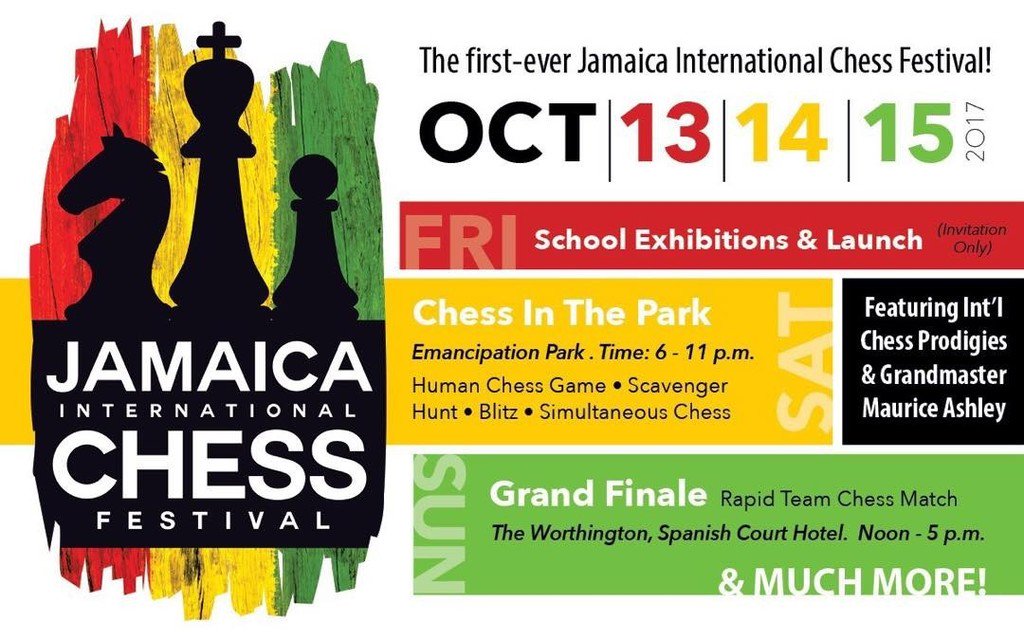 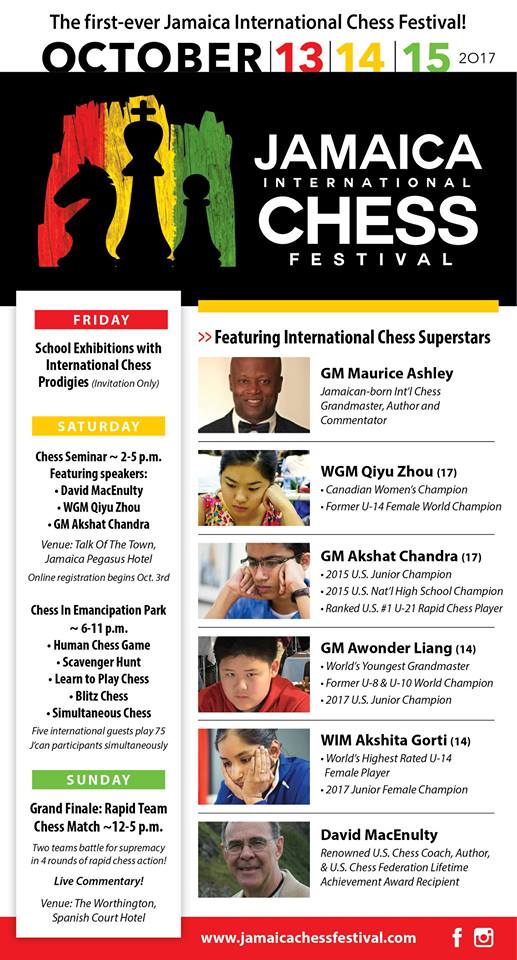 GM Maurice Ashley is launching yet another initiative. This time it will be in his home country of Jamaica. In a couple of weeks, he will host the 1st Jamaica International Chess Festival. It will feature a number of activities including a tournament with American scholastic stars.

The Caribbean seems to be a rite-of-passage for many scholastic players given the close proximity. American star Hikaru Nakamura first cut his teeth in Trinidad as a 10-year old and other junior players have enjoyed places like Bermuda and Curacao. This tournament will feature a couple of phenoms in GMs Awonder Liang and Akshat Chanda along with FM Akshita Gorti, girls junior champion. Canada’s 2016 women’s champion FM Qiyu Zhou will also be part of the contingent making an appearance as well.

There will be a variety of activities including school visits, seminars and simuls (featuring the four young masters). On the last day, the team event will feature the four phenoms in a 4-round rapid team match.

“So the Festival is about empowerment: Empowering by expanding the envelope of the possible. We are broadening the reach of Chess in Jamaica, promoting the game in a fun-filled atmosphere, while inspiring existing players to higher levels of achievement.”

The event is the brainchild of Ashley and Nigel Clarke, who served as Jamaica’s Ambassador of Economic Affairs. Clarke is a “Chess Dad” and took his children to the 2015 World Youth Chess Championship where he met Liang and his father. However, the idea gained momentum when he visited the Sinquefield Cup last year and discussed the project with Ashley. Clarke also serves as one of the Vice Presidents of Jamaica Chess Federation.

While the project lies outside the auspices of the JCF, the entire chess community has provided support. According to Clarke, members of the JCF Council (IA Robert Wheeler, NM Peter Myers) will serve as arbiters for the team event. JCF President Ian Wilkinson and FM Warren Elliott will served as volunteers for the festival. Ashley will also lend his world famous commentating skills.

Back in Jamaica to work on the 1st ever Jamaica International Chess Festival. Did I mention this is work?? ???? https://t.co/hAhCbJ4TqS pic.twitter.com/2V2KrU5Rpv