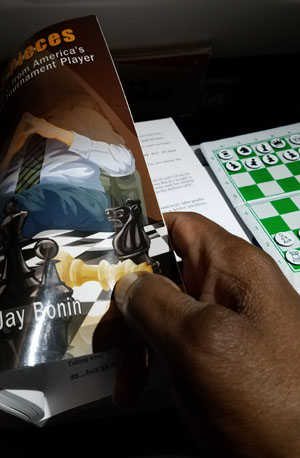 On the plane to Africa reading
“Active Pieces: Practical Advice from America’s Most Relentless Tournament Player”
by IM Jay Bonin

While on my 15-hour flight for a four-country African tour (actually five), I read through Jay Bonin’s Active Pieces: Practical Advice from America’s Most Relentless Tournament Player, a book about his chess career. I don’t do many book reviews, but seeing that I just wrote Triple Exclam, I wanted to see how this book was put together. Bonin professes to be another product of the “Fischer Boom” and through his games tells quite a number of nostalgic stories about the New York chess scene. In my opinion, “The Big Apple” can still argue that it is the “Mecca of Chess” in America.

The book has a rather straightforward, but effective format and is very readable. One of the first things I enjoyed about the book was the variety of recognizable names of opponents. Given Bonin’s activity, it is not a surprise that he has played practically everyone who has ever played in New York since 1972. I easily recognized the household names, friends of mine, as well as some of the players long forgotten. It is rare to have a book with such diverse games. I was surprised to learn that he had played opponents hundreds of times! Of course, a player who average 400-500 games a year (and at his peak going up to 700-800) is going to have regular “customers.” 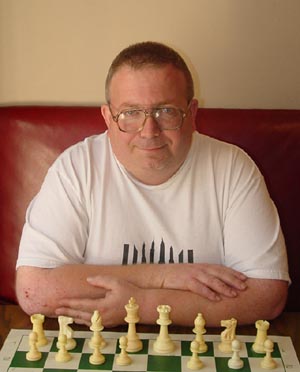 The book is laid out into nine chapters with the last being a compilation of tactical puzzles of various games. The good thing about this (and perhaps I could’ve used this idea) was to present the entire game in the solutions and giving a diagram at the critical position. It’s a way to see how the position unfolded and more importantly, presents more games.

I have never played Bonin, but remember meeting him briefly during my only trip to the Marshall Chess Club several years back. He is a rather unassuming and unpretentious man, but certainly, his passion for chess totally consumes him and spills over onto the board. In this book, he coins some words in his lingo. Who can forget that he prefers endgame maneuvers featuring his “Bonin Knights”?

The games in each chapter center around a theme. The first chapter “Keep It Complicated, Stupid” is advice to ensure that you give your opponent (especially lower-rated) enough opportunities to go wrong. Given Bonin’s proclivity to venture into unique positions he can steer, many of the games were lessons of positional chess.

“If a grandmaster offers you a draw,
whatever you do, don’t take it!”
~IM Jay Bonin

In Chapter 2, “Oh No – Not You Again,” Bonin goes into the psychology of playing the same player multiple times. He also shares his daily routine and how he prepares for tournaments. What approach should one take when facing the same opponent three or four times in a week, and sometimes with the same color? “Should I switch it up, or do I risk repeating the same opening variation?” he inquires. Nowadays, chess databases make this a constant issue. His three games (in two weeks) with Ted Belanoff are interesting.

Chapter 3 gives some interesting, yet controversial advice. “If a grandmaster offers you a draw, whatever you do, don’t take it!” Now Jay… is this so?? Ironically, he gives a loss to legendary Romanian Grandmaster Florin Gheorghiu as a case in point. The only issue I have is that we didn’t see the game. He also offers a couple following tips in the chapter: (1) offer a draw after making a capture and (2) never accept a draw offer from a GM. Interesting. I like the first piece of advice better. 🙂

Chapter 4 “That’s No Way to Treat a Lady” is an ode to the idea of when to trade queens. Bonin favors queenless games and knights over bishops.

Swapping the ladies early decreases the chances of falling into a mating attack; it can create psychological discomfort for my opponent who may not have been expecting a queenless middlegame; and it allows me to steer the game towards my favorite types of ending more quickly without too much risk.

So one may ask, how does the jibe with chapter 1?? Is there a way to strive to trade queens, yet keeping the game complicated? Indeed!

Unlike other game compilations, Bonin does not try to pretend that his games are slugfests filled with mating patterns and kamikaze attacks. His examples are simplistic and very instructive… including his treatment of the Smith-Morra Gambit against Michael Shapiro. There are even games with two familiar names to readers of The Chess Drum: Stephen Muhammad and Jamaica’s Russel Porter (see above). All provide some practical advice about the importance of understanding endgame structures; an idea lost on many class players and even Masters!

While exchanging queens may increase drawing chances, Chapter 6 “The Endgame” gives an idea of how to avoid lifeless symmetrical games. Here is a pearl of wisdom from Bonin:

My approach to Swiss System tournament is not glamourous: I do not seek to win any brilliancy prizes to spring theoretical novelties on my unsuspecting opponents – I leave this style of play to the chess youth who have infinitely more energy for study and memorization than I do. Instead, I focus on grinding out queenless middlegame and drawish endings for hours on end until my opponent cracks, one by one. Please note, I am not suggesting that I am particular talented in the endgame or that I am the second coming of Capablanca – I consider myself unworthy to even shine his shoes – it’s just that in my career as a chess player I have noticed that most tournament players are so incredibly inept at handling endgame positions that it is infinitely easier to rush towards an equal ending where they have plenty of subtle errors to discover on their own, than it is to try to out-calculate them in a complex middlegame where I may be unpleasantly surprised by a cunning opponent who is more familiar with a particular position than me.

Alas, he proved this in his win against a young Josh Colas on page 131. In Chapter 7, “Rope-A-Dope,” he advises that when playing young players, steer the game into endings since it is a phase where they are the weakest. Practically every young player in the New York area has to go through Bonin and certainly Colas, now an IM-elect, learned quite a bit from the wily veteran. It’s hard to fathom Bonin’s activity over the years, and I can only imagine the stories that he has to tell. While this is not a total compilation of his experiences, it provides insights to his passion.

“When facing young players, I always steer the contest into and ending because they usually struggle in that phase of the game.”

Bonin beat some very notable names including Larry Christiansen, Gata Kamsky and legendary figures such as Sammy Reshevsky, Robert Byrne, Lev Alburt and Anthony Miles. With such a handsome collection of wins over GMs, the inevitable questions of norms will arise. Of course, it is the same question asked of Emory Tate who scored approximately 100 wins over GMs. Bonin did not mention the earning of any norms, but the fact is GM norms are extremely hard to earn on the American circuit.

In Chapter 8, “Beating Grandmasters,” here is an exciting encounter with a 16-year old Hikaru Nakamura. You’ll have to get the book to get the full annotations, but there are a few given.

I learned a great deal from Active Pieces. You don’t have to be a top-level GM to write a useful book. In fact, some of the most useful advice can come from the non-professional ranks. While Bonin doesn’t pretend to be Mark Dvoretsky, his advice is certainly practical and applicable to tournament play.

Finally, Bonin gives another treat with 100 tactical puzzles. These are not going to be the dashing sacrifices leading to mate in 10, but there are some “clean hits.” The sheer variety of games and opponents make this chapter quite a treasure! The book is not without a few errors here and there, but of course, it is hard to imagine a “perfect book” in chess. I learned this in writing Triple Exclam. The best editing occurs after you’ve already published the piece!

One issue is that Bonin could not display all games to completion which (I presume) was due to the games being in faster time control. It is a minor detail, but certainly would help to show how he closed the deal in some of the games. In the puzzle section, he could have added variations of the winning lines since there is no way to tell if the best defense was played.

All in all, it’s a good read and a tribute to a legendary figure of New York chess. Support a living legend!

Triple Exclam touches down in Africa