Joshua Colas is no longer “JoshuKid”, his ICC moniker. He has grown up in chess. Last night at the Marshall Chess Club, he eclipsed the 2200 rating barrier after beating National Master Leonardo Martinez (2256). In doing so, he breaks the age record for youngest African-American, or generally speaking, Black player to reach National Master.

The record is now lowered to 12 years, 3 months and 11 days. While Colas’ does not hold the overall national record for youngest Master (Samuel Sevian), this feat is quite an accomplishment. About 2% of all U.S. players ever reach the rank of National Master. 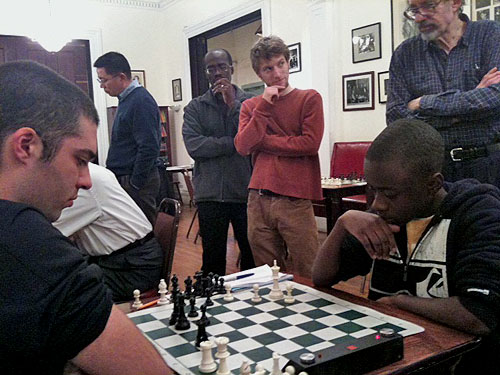 Joshua has his sights set on higher goals and has recently worked with GM Alexander Stripunsky. Having just won the 7th grade national championship last weekend, his Master’s title is the latest of what has been a wonderful year for the young star. It will also be a point of motivating other players to seek higher heights at a young age. Congratulations Joshua!!