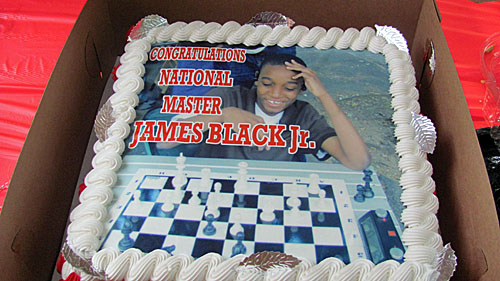 What made this moment so historic is that this is the first time in history that we have three Black National Masters under the age of 16 and all have achieved this feat within a year of each other. The program was highlighted by Grand Master (GM) Maurice Ashley who inducted the three young master’s into the Young Black Master’s Club and was followed by a Masters Tournament. More than 100 people attended this surprise celebration, which ran from 2pm into the evening. This event was organized by chess enthusiasts Adia Onyango and Sean Miller.

James Black Jr. became a Master in July 2011 in an amazing four years, a tremendous accomplishment. Fewer than one percent of chess players even come close to breaking master. As his chess teacher Women’s International Master (WIM) Elizabeth Spiegel stated, “James’ real accomplishment is not exactly breaking 2200. The real accomplishment is how long it took him to do that, and the sum total of the effort it took”. 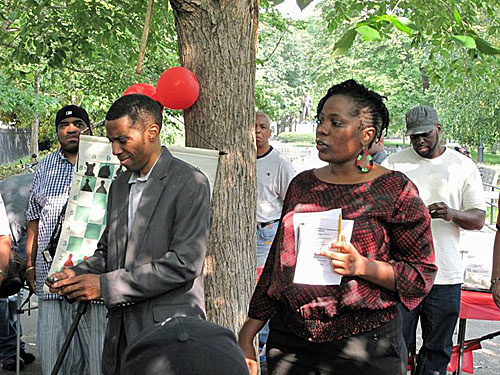 NM James Black Jr. was honored by a panel of surprise speakers who have all influenced him in some way, starting with the featured speaker the first African American GM Maurice Ashley who spoke directly to all three young Masters. GM Maurice reflected on his earlier years in chess, the Black Bear School and the impact his peers who were not even 2200 had on him. He ended with a strong message to the boys about not giving up, the importance of the family and that they should all keep moving towards GM.

GM Maurice was followed by three of James’ teachers; coach Thomas Haggins his first chess coach from P.S. /I.S. 308, his current coach at P.S. 318 WIM Elizabeth Spiegel and Al Freeman, his first private coach. Coach Haggins spoke of his approach to coaching saying, “At school my goal was to make thinkers out of the children”. Haggins also spoke of the importance of family and how instrumental James’ father has been in James’ development, saying, “His father took him further, he took him to another level, he kept pushing him”.

WIM Spiegel spoke of the challenge of becoming a Master and spoke directly to James as she told him how proud she was of his accomplishment saying,

He has worked so hard, so patiently, for so long, and that is what I respect the most about James. I can’t think of many people, let alone 12 year old boys who would devote an entire year of their life, so energetically and so resolutely to achieving such a difficult goal. It’s this determination that makes me believe that James will accomplish truly great things in his life. (Spiegel’s full speech at her blog) 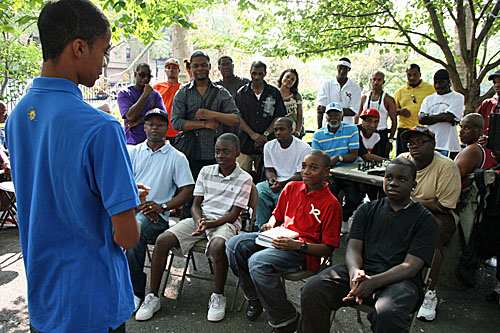 Nigel Bryant giving a tribute to his friends.
Photo by Derrick Bryant.

James’ teachers were followed by others who have had an impact in his life. Many of these final speakers addressed all of the young masters and included James’ good friend Nigel Bryant who is well on his way to becoming a NM himself, Guy Colas (Joshua’s father), Stuart Chagrin who sponsors James’ chess lessons, and representatives from the three parks that James’ has spent time in, Fulton Park, St. Nicholas Park, and West 4th Park.

Master Lee spoke for Fulton Park and stressed to all of the boys not to forget GM Maurice Ashley who paved the path before them. He spoke of the struggles of playing in the 80’s before you had other GMs to look up to. Master Lee’s final words to the young Masters were, “I don’t want you guys to give up. Before Maurice there were not really any masters. But when he became GM you now have International Masters (IM) and NMs all over the country. You guys are going to represent for kids coming after you”.

The final speaker James Black Sr. brought down the house with his words to the community about parenthood. He started by thanking everyone and explaining his relationship with his son saying,

I’m on a journey I tell everyone, I’m truly on a journey with my boy. I knew before I had a child that I would dedicate my life to my child. I just never knew that it would be something to do with chess. If I told you how hard James works you probably wouldn’t believe me. I want him to have better, much, much more than I had. I tell him the way to go about it is through hard work, studies and good dedication and he does all of those things and more.” James Sr. finished by addressing all of the boys and saying, “I don’t think we have to say anything to the three of them I think they know what is at stake. If they don’t know I don’t know what to tell them because they have the world at their feet. Anything they want to be in life they can accomplish it if they choose to. With hard work and determination they will accomplish and become anything they want to be. I wish all three of them and the ones that follow good luck and like I said before, you know what needs to be done, it’s just the question are you going to go out and do what needs to be done.

Following the panel of speakers all three boys were inducted into the Young Black Masters Club by GM Maurice Ashley and presented with certificates in recognition of achieving the title of National Master under the age of 16. Ms. Onyango is starting this initiative to encourage other young Blacks to strive to show the same level of dedication and focus so that they too can reach master before the age of 16. Persons interested in learning more about this initiative or who work with youngsters close to reaching master before the age of 16 should contact Adia Onyango at chessconnections@hotmail.com. 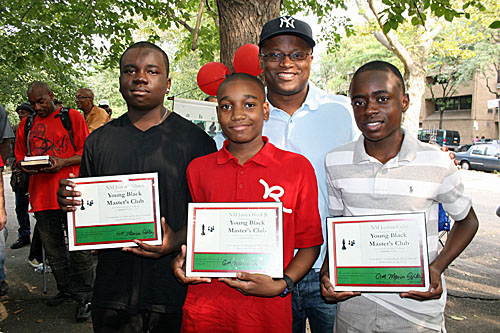 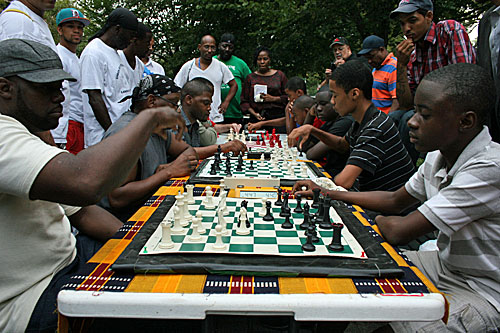 Veterans square off against “Young Lions”.
Photo by Adia Onyango.

Following the Young Black Master’s ceremony a Master’s tournament was held with the three Young Black Masters playing against some of the veteran Masters. Playing with the Young Black Masters was Expert Jehron Bryant and his twin brother, Expert Nigel Bryant. Playing for the Veterans was NM Leon, NM Nathaniel Jackson, NM Paul Jacklyn, and Experts Kola Adeyemi and Al Freeman. Five rounds were played and the final score was 12-13 with the veterans taking the tournament by one point. The Most Valuable Player for each of the teams was Paul Jacklyn, finishing undefeated and NM James Black who finished with four points, only losing to Paul.

Adia Onyango is the founder of Chess Connections an active chess group that strives to change the face of chess through community involvement as well as to connect chess players on and off of the board. Ms. Onyango has her roots in community organizing and has always desired to unite this with her passion for chess and the promotion of chess. Ms. Onyango has organized numerous community events including chess clothing and food drive, free weekly summer tournaments held at Fulton Park, chess and volleyball and a Midnight Madness Chess event held in Times Square.

Sean Miller is the founder of NY loves Chess and also has a passion for changing chess through organizing. Mr. Miller has recently begun promoting chess with two very successful ventures, Chess Day at Bryant Park featuring a 9 board simultaneous exhibit with 12 year old NM Justus William and a blitz tournament in Bryant Park.