Tragic news has hit the chess community once again. Ronald Jones, 59, an icon in the Washington, DC chess scene was stabbed to death in a domestic incident. The assailant named in the Washington Post article was Alisa Randall, 31, of the Northwest DC area. On the morning of July 15th at 4:54am, the police were summoned to check on a residence.

According to court documents, officers found Jones lying inside the doorway of 1368 Euclid (Northwest) with “multiple stab wounds” and “no signs consistent with life.” DC Fire and Emergency Medical Department Service (MEDIC 21) pronounced him dead at 5:39am. Randall told the police the two had been in an altercation and she admitted to stabbing Jones. Randall was arrested at the scene and has been charged with second-degree murder.

Jones was very active at the DC Chess Center run by David Mehler and according to the organization’s website,

Ronald Jones has been an instructor and manager at the U.S. Chess Center since 2008. In addition to working with kids in various Chess Center programs and handling numerous administrative tasks, he directs tournaments at the Center. Prior to coming to Washington, D.C., Mr. Jones was an active member of chess communities in Chicago, Atlanta, and New York, and has mentored many young players along the way. In 2008, Ron won first place in the Garry Kasparov Problem Solving Contest in Harlem. He competes in the D.C. Chess League as a member of the Black Knights, and is the reigning D.C. Chess Champion.

Jamaal Abdul-Alim, a DC-area journalist and writer for Chess Life met Jones after arriving in DC in 2008.

We’ve played countless games on the cement tables at DuPont Circle well into the wee hours of the night on numerous occasions. With Ron being expert player, of course, he won the vast majority of the games against me as a “C” Class player who has never broken 1600. Even when I was pressing him and thought maybe I had the upper hand, he would usually find some type of way to wriggle out of trouble and win the game. It was aggravating as a player.

According to his USCF tournament record, Ron played most of his tournament chess in the DC area, but could be seen at the World Open in Philadelphia where he played in the side events. He was a fervent believer in the upliftment of the Black community and very big advocate of chess excellence among the Black youth. In Abdul-Alim’s story titled, “The Racial Gap for Titles Among American Chess Players,” Ron offered this hypothesis:

“Most of the people that play, they have disposable income. They can afford to spend $300 for a tournament, $500 for a hotel, another $1000 for an airline ticket to another state.”

It’s very true that tournaments are expensive and the cost-benefit analysis does not always suit playing in major tournaments. Many will seek the cheaper one-day events or simply blitz games in the park. However, Ron was present during one of the historic chess events in the Black community, the Wilbert Paige Memorial held July 2001 in Harlem, New York. Ten of the top players for African descent assembled to battle. 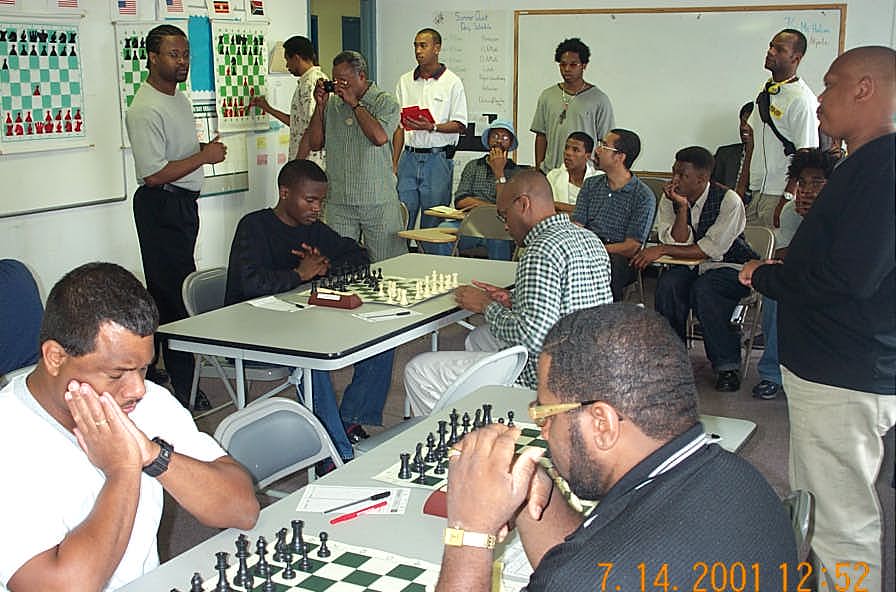 Front row for the opening round of the historic
Wilbert Paige Memorial! 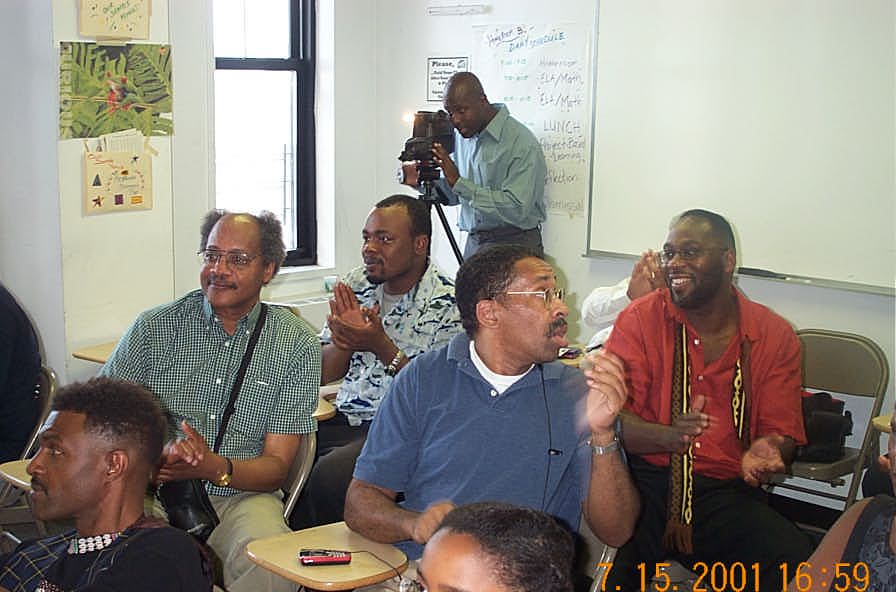 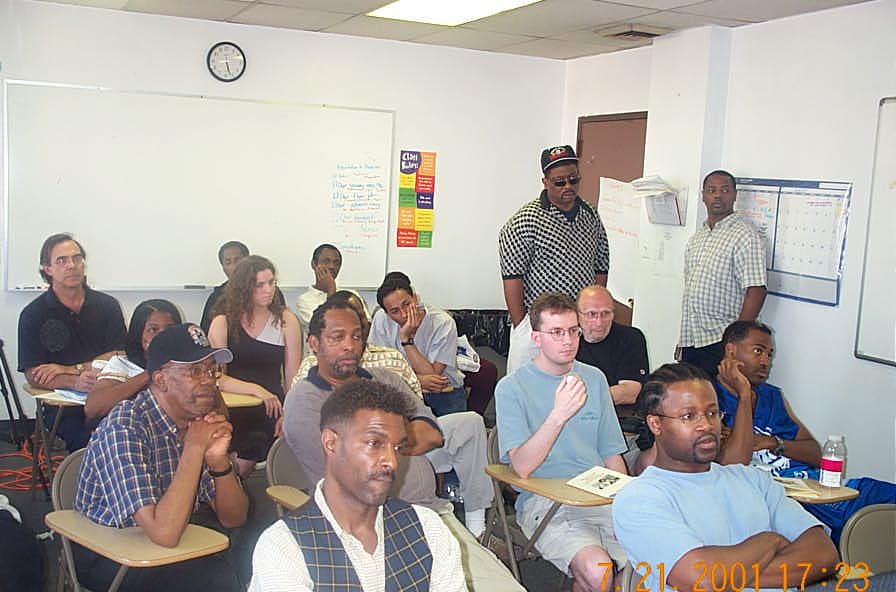 Ron Jones (front left) watching analysis at 2001 Wilbert Paige Memorial in Harlem, New York. There are other recognizable faces in the crowd! Photos by Daaim Shabazz

The Wilbert Paige event was a memorable tournament and everyone who was present could feel its powerful vibe. Ron spoke fondly of the time he spent playing in New York and the indelible impression it left on him.

According to Jamaal, Ron had a generous side. Jamaal reflected on a recent story where Ron was proudly passing out “Millionaire Chess” vinyl boards. This was not just any chess board. This was a piece of history created by Grandmaster Maurice Ashley! Although he didn’t participate in the events, perhaps it was his way of sharing that memory.

Ron was one of those men who had a lot of awareness about the plight of the Black community and developed very pointed views about the subject. Jamaal mentioned Ron creating a PowerPoint presentation about “Black Wall Street” and presented the illustration to make a point about the open hostility that Black people in the United States have faced historically and continue to face. The plight of the disenfranchised and impoverished touched his soul. 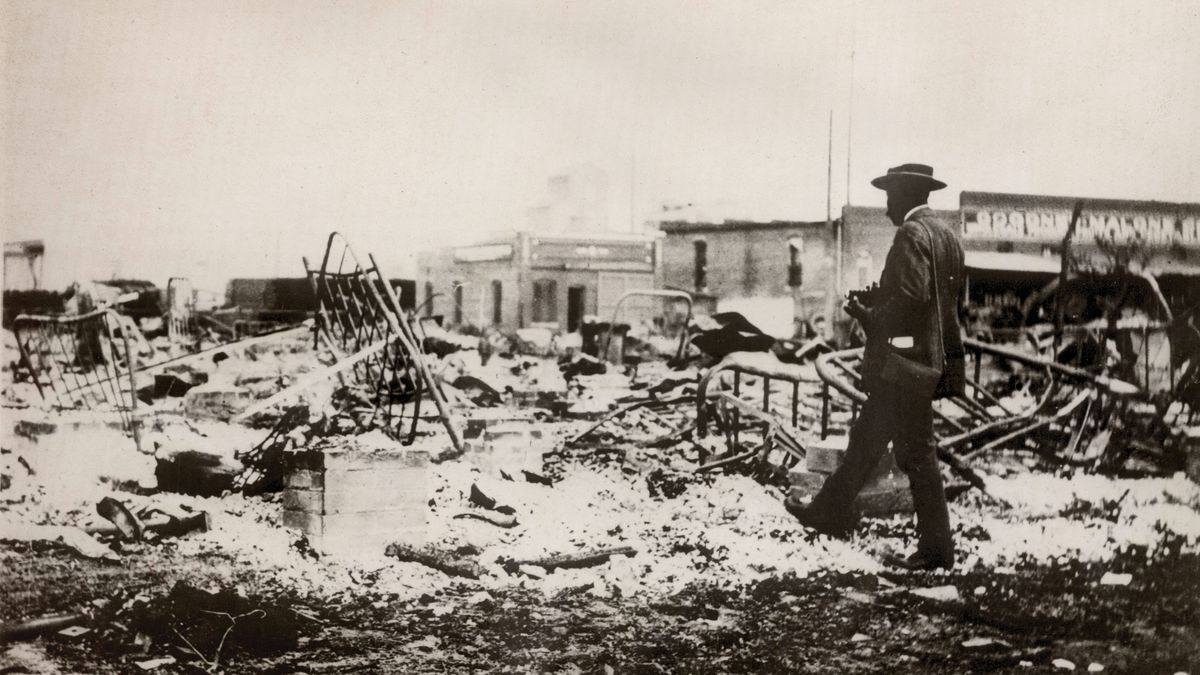 The morning after Tulsa race riots decimated the affluent “Black Wall Street” in 1921. It is amazing that Ron sought to immortalize this tragedy, but he also had respect for homeless. It is without a sense of irony, that 10,000 people were left homeless as a result of the Tulsa riots.

Ron had strong opinions about how I wrote about DuPont Circle. For instance, in one story, I indicated that I planned to mention how a lot of the players at DuPont are homeless. He didn’t like that label at all and he let me know it in no uncertain terms. He thought it had too much of a negative connotation and stigmatized the players. In fact, he didn’t even want anyone to refer to Tani (Adewumi) — the 8-year-old rising star out of New York — as homeless. I mean, he was vehemently against that label. He despised and detested it.

One wonders what drives men like Ron and others like James “Black Knight” Taylor, another passionate DC resident who preceded him in death. These men may not be chess masters, but their passion for chess and their belief in its qualities may be more authentic than players who only focuses on securing money, titles and accolades for self-fulfillment. Ron spent years giving the knowledge he had. Not a master, but good enough to have the credibility in knowledge he was spreading… and people listened.