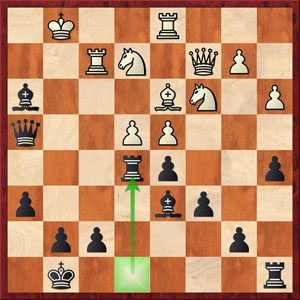 Moiseenko-Korley, Xtracon Open 2019
After 19.Rad1, Korley played 19…Re5!!!
IM Kassa Korley has been trying to find his groove for the past year in search of stability in his GM pursuit. He is currently in Denmark playing in the Xtracon Chess Open (Helsingør, Denmark) and played an absolute brilliant game in round four (July 22nd). His opponent was GM Alexander Moiseenko of the Ukraine who was once ranked 22nd in the world with a peak rating of 2726.

In this game Korley had the black pieces against the formidable opponent, but vanquished the Ukrainian in only 25 moves with a sacrificial attack. The game was reminiscent of another IM who dazzled the board with similar pyrotechnics. Korley is usually more of a positional savant looking to accumulate advantages and cash them in with dynamic play, but in this game he shows he can unleash his attacking fury!