In two days, the 2022 Candidates tournament will begin with a very interesting field of new faces and some returnees from the 2020 edition. Ian Nepomniachtchi won the tournament and went on to face defending champion Magnus Carlsen for the crown. The champion got a crushing 7½-3½ win, a total disaster for the Russian player. He collapsed toward the end losing three of last four games.

Each of the eight qualifiers got here in very different ways. Hikaru Nakamura is perhaps the biggest surprise after being away 822 days from competitive chess. The last classical game was October 2019 at the FIDE Grand Swiss, but it appears that all of the Twitch streaming has paid off. Everyone will be watching closely to see if the American has his old fighting spirit.

Since Nakamura’s rise as a streaming superstar, there has been another talent emerging among the elite. Iranian-born Alireza Firoujza changed the landscape with a meteroic rise to the 2800-club. Since changing his federation to France, he has become the new sensation and perhaps the heir-apparent to World Champion Magnus Carlsen. In fact, after Carlsen crushed Ian Nepomniachtchi in their championship match, he mentioned that unless another fresh face (Firoujza) emerges, he would not play another championship match.

This will be the biggest test for Firouzja as he will face a highly-motivated field including two championship challengers in Fabiano Caruana and Nepomniachtchi and the world’s #2 in Ding Liren. Ding was able to find a way into the Candidates after Sergey Karjakin was banned six months for violating FIDE Ethics after supporting the condemned Russian invasion of Ukraine. Jan-Krzysztof Duda of Poland won the 2021 World Cup in an impressive fashion. With Richard Rapport qualifying through the FIDE Grand Prix, the field is a very youthful 28 years.

It seems that not long ago Teimour Radjabov was a teenage phenom taking on the likes of Garry Kasparov. While never challenging for the title, he has always been one of the world’s elite and after a hiatus, he qualified for the Candidates by winning the 2019 World Cup over Ding Liren.

As the 2020 Candidates tournament approached, COVID-19 was sweeping the globe and ultimately Radjabov decided to pull out. Organizers started the tournament, only to postpone midway through. Radjabov protested the idea of holding the tournament under such conditions. In controversial fashion, FIDE decided to grant him the wildcard position. In such a mixed field with a diversity of players, it should be an exciting tournament! 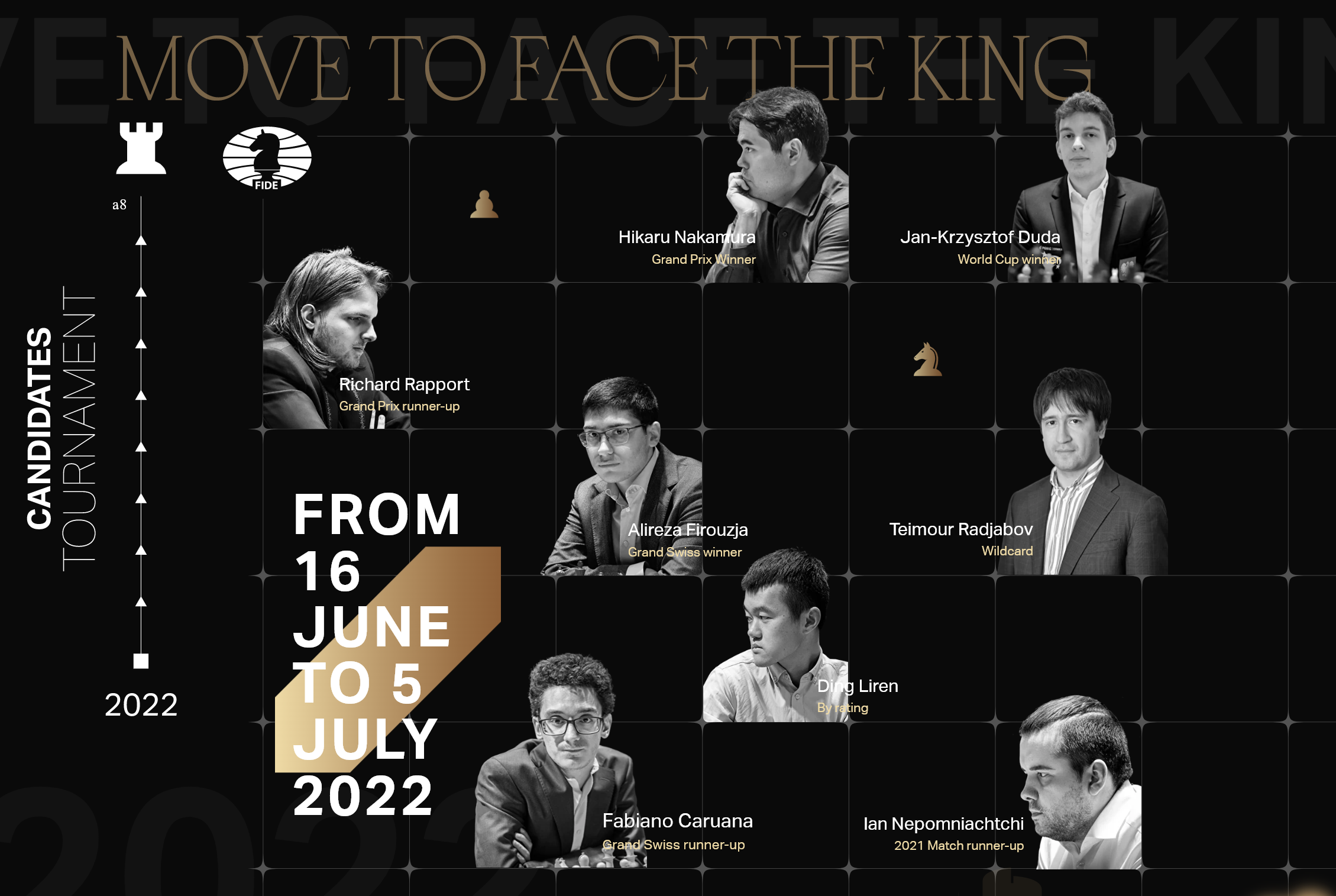