The players competing for the berth to challenge Magnus Carlsen will be playing the “COVID Gambit” during the second-half of the 2020 Candidates tournament. A decision was made by Russian organizers to hold the event since the government was still allowing mass gathering. Less than a month later, the organizers and FIDE agreed that the tournament would be cancelled due to Russia’s newly-imposed flight restrictions.

Here was the announcement by FIDE President Arkady Dvorkovich:

Today, the government of the Russian Federation announced that starting March 27, 2020, Russia interrupts air traffic with other countries without indicating any time frames.

FIDE can not continue the tournament without guarantees for the players’ and officials’ safe and timely return home. In this situation and on the basis of clause 1.5. Rules of Candidates Tournament, the FIDE President decided to stop the tournament. It will be continued later, with the exact dates to be announced as soon, as the global situation related to the COVID-19 pandemic will allow. As it was stipulated by the special rules agreed with the players before the start of the event, the results of the 7 rounds played remain valid, and the tournament will be resumed in the same composition starting with the games of the 8th round. FIDE is grateful to the players, officials, volunteers and the entire team of organizers, including the Chess Federation of Russia and the main partner of the tournament – SIMA-Land.

Candidates’ tournaments have always been very intense given the high stakes. The growing threat of the coronavirus makes the logistical execution even more intense. While the organizers had procedures in place, there were constant reminders about the virus as the news cycle was dominated by its rapid spread.

Events of major leagues had been canceled so that left everyone in the world with few options for sporting entertainment. The Candidates tournament stood alone. There was a binge on live broadcasts at FIDE, chess.com, chess24, and St. Louis Chess Club.

I am following four different broadcasts for the #FIDECandidates. Crazy! Is this the COVID-19 effect? @thechessdrum @chess24com @chesscom @FIDE_chess @STLChessClub pic.twitter.com/MAIixo64bz

There were also large audiences on Twitch, Internet Chess Club and lichess. Of course Facebook was buzzing. So there was success as far as reaching a critical mass, but as the virus rapidly spread, there was more ambivalence about the tournament continuing.

For the players, they were rather insulated, but they could not escape the thought that they (and their families) may be in danger. Morale had also deteriorated among some of the players. Russia’s Alexander Grischuk had this reaction:

Grischuk: "I have a clear opinion that the event should be stopped. The atmosphere is very hostile." #Candidates2020 pic.twitter.com/PL1afaUDBO

Even during the Candidates, there was some inconsistency on the precautions and some players shook hands, while others nodded. Ian Nepomniachtchi and Grischuk gave and “elbow bump” before their game. Nepomniachtchi had initially refused to shake the hand of Anatoly Karpov during the ceremonial first move before his game against Anish Giri. Giri obliged Karpov and later derided the elbow bump as being a bit silly.

Most understood Nepomniachtchi’s refusal of Karpov, but the moment was indeed awkward. What is most ironic is that Nepomniachtchi seem to come down with a bad cough during the tournament and didn’t look well. “I’m definitely not feeling OK today,” he said during the interview after his win over Ding. There were also others coughing in the area. Take a listen…

Even the thought that Nepomniachtchi could have been infected was also alarming since he was sharing the environment with many others. He was tested and the fortunately, tests were negative. In the final analysis, it was a very risky decision to hold the tournament with a dangerous virus blanketing the globe. FIDE Director General GM Emil Sutovsky made a statement to clarify FIDE’s decisions:

FIDE does its utmost both to minimize the risk and not to overwhelm grandmasters who are already under the pressure with all sorts of check-ups. FIDE really takes it all very seriously.

These comments give little solace since the players’ interactions were inconsistent. Nepomniachtchi declined shaking hands with Anatoly Karpov, elbow bumped Alexander Grischuk and later shook hands with Ding Liren. The fact that two Chinese players had to constantly have thoughts of home on their minds had to be unsettling. This was mentioned by Wang Hao who had recommended postponed the tournament in the beginning. He told chess.com:

I think it’s like a joke. From the start, it shouldn’t have been held. It shouldn’t be started just to be postponed. Not like this, this is just a big mess. They could have known it would cause a lot of different problems. Of course, they cannot control everything. There were a lot of reasons to postpone.

During the whole tournament, I felt I was distracted. I was worrying about flights, seeing bad news about China… Now if we enter China, we will be quarantined for two weeks. I could just have arrived from Tokyo to Beijing and quarantine at home, now I don’t think that is possible.

Azerbaijan’s Teimour Radjabov had withdrawn from the tournament because he could not convince FIDE to postpone the event. He had full intention of participating despite rumors that he may not have the motivation. After the tournament was postponed, questions emerged on whether Radjabov should somehow be inserted or given an automatic spot in the next cycle.

"In general I think @FIDE_chess should take a decision to include me back, I think that would be a fair decision." – @rajachess https://t.co/rlwjjkMW8j#FIDECandidates pic.twitter.com/GTdkfjQGzZ

Many fans and high-level players agreed with Radjabov including Hikaru Nakamura who admonished those questioning Raja’s decision to withdraw. It was a very prudent decision since the virus was in its initial growth stage and doctors had not completely figured out how to contain it. As of today, the cases exceed 700,000 with China’s cases having largely been stabilized. Meanwhile, the U.S. cases have soared given the lack of initiative conveyed by the Trump administration.

How would they treat the second half of the tournament
if one of the players became ill and could not continue?

Now there is a question when the second-half of the Candidates tournament will be played. With the Candidates tournament and Chess Olympiad being postponed, it will delay other events until 2021, most notably the World Chess Championship. The other question is how long this crisis will last. No one knows, but several of the players live in countries with the highest number of cases. 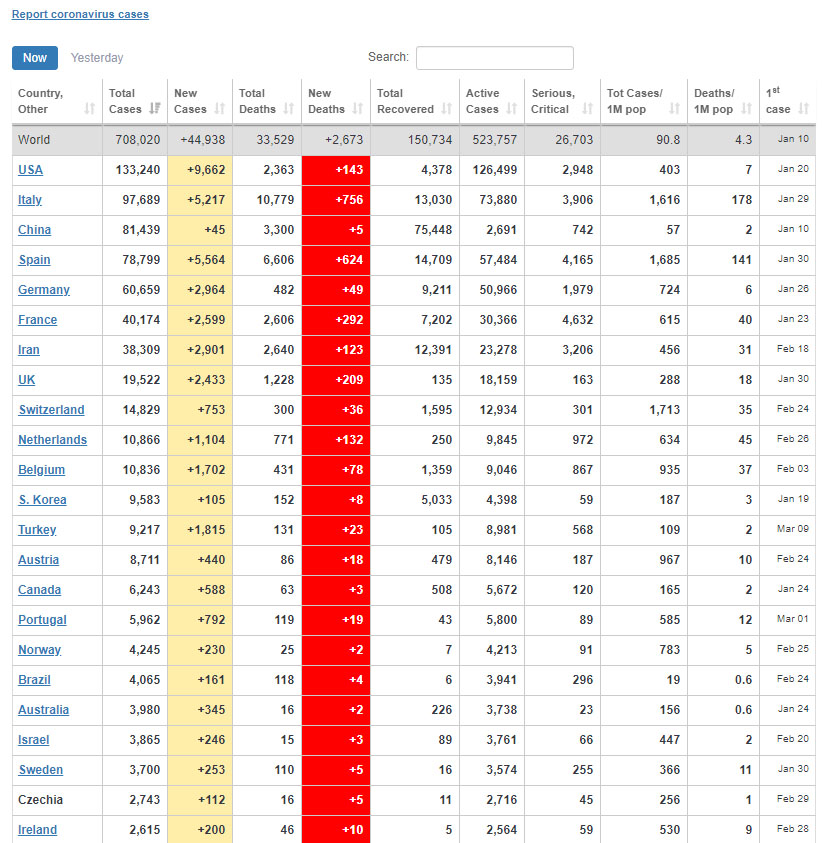 Many argued that the players were safer in Russia (1500+ cases) than their home countries. Others like Viswanathan Anand thought the tournament should have been completed. Of course, these are understandable thoughts, but without guaranteed charter flights, it would put players in a situation of being stuck in Russia weeks after the tournament. It does present a quandary. How would they treat the second half of the tournament if one of the players became ill and could not continue?

Someone suggested that the classical tournament finish online. During the outbreak, many activities have moved online, so it is an interesting suggestion, but probably not desirable. Perhaps that may be considered in the future as over-the-board chess is slowly being affected by Internet gaming. Perhaps we also will see some changes in health standards at chess tournaments. The coronavirus notwithstanding, they were long overdue.