Today is a big day for the chess world as 309 players (206 open, 103 women) from 93 federations have assembled in Sochi, Russia to compete in the World Cup tournament. This will be the first event involving all federations since the COVID scourge swept the globe in early 2020. In addition, the 2020 Chess Olympiad was canceled and will be hosted in Moscow next year.

After players migrated to online play for a year, there was a longing for the interactions that make chess such an interesting sport to watch. This tournament will last until August 6th and will include many of the top players including World Champion, Magnus Carlsen. The expanded format between diverse players will promise a few upsets and perhaps give rise to unknown talents. FIDE President Arkady Dvorkovich gave comments at the press conference.

The World Cup is one of the most significant events on the chess calendar and is very attractive for the spectators thanks to its knock-out formula. In order to minimize the organizational risks, we decided to unify the Open Section with the Women’s Section – all games will be played at the same time and place.

The top two finishers (apart from Carlsen) will earn a slot in the World Candidates tournament in 2022. The next six players will qualify for the FIDE Grand Prix 2022. This new format hopes to breathe new life into the professional tournament circuit which has featured the same combination of players for the past decade.

Each federation in the top 100 ranking had a chance to select one player to represent the country in the tournament. This gives the chess community to learn about national heroes who may not be well known. Elmer Prudente of Guam will be the lowest-ranking player, but discusses what it means to him.

There were also wildcard nominees. Indian talents Rameshbabu Praggnanandhaa and Dommaraju Gukesh will join a strong contingent from the country. The world’s youngest Grandmaster Abhimanyu Mishra (USA) also received one of the selections and he will face Georgia’s Baadur Jobava.

Very happy and excited to make my debut in World cup chess at Sochi,Russia.Thanks @FIDE_chess and @advorkovich for the wildcard.
Looking forward to the excitement ahead.
Thanks @STLChessClub for the encouragement and support.

In the women’s field, Russia will be defending home turf as they will have most of the top players in action. On the other hand, perennial favorite China only entered former champion Tan Zhongyi due to COVID travel restrictions from the governments. Humpy Koneru of India also nixed this event. The Muzychuk sisters (Anna and Mariya) will lead the Ukrainians and rising star Zhansaya Abdumalik will showcase some of the top talents in the women’s field. The complete list can be found below!

Each of the matches will comprise of two game matches, plus tiebreaks, if necessary. The last standing after the previous rounds will enter the seventh round of four games, plus tiebreaks if necessary. Players receive 90 minutes for the first 40 moves followed by 30 minutes for the rest of the game plus 30 seconds per move starting from move one. If the score is tied the players then play two 25-minute + 10-second increment rapid games, then two 10+10 games, then two 5+3 and, finally, Armageddon, where White has 5 minutes to Black’s 4 but a draw qualifies Black for the next round. 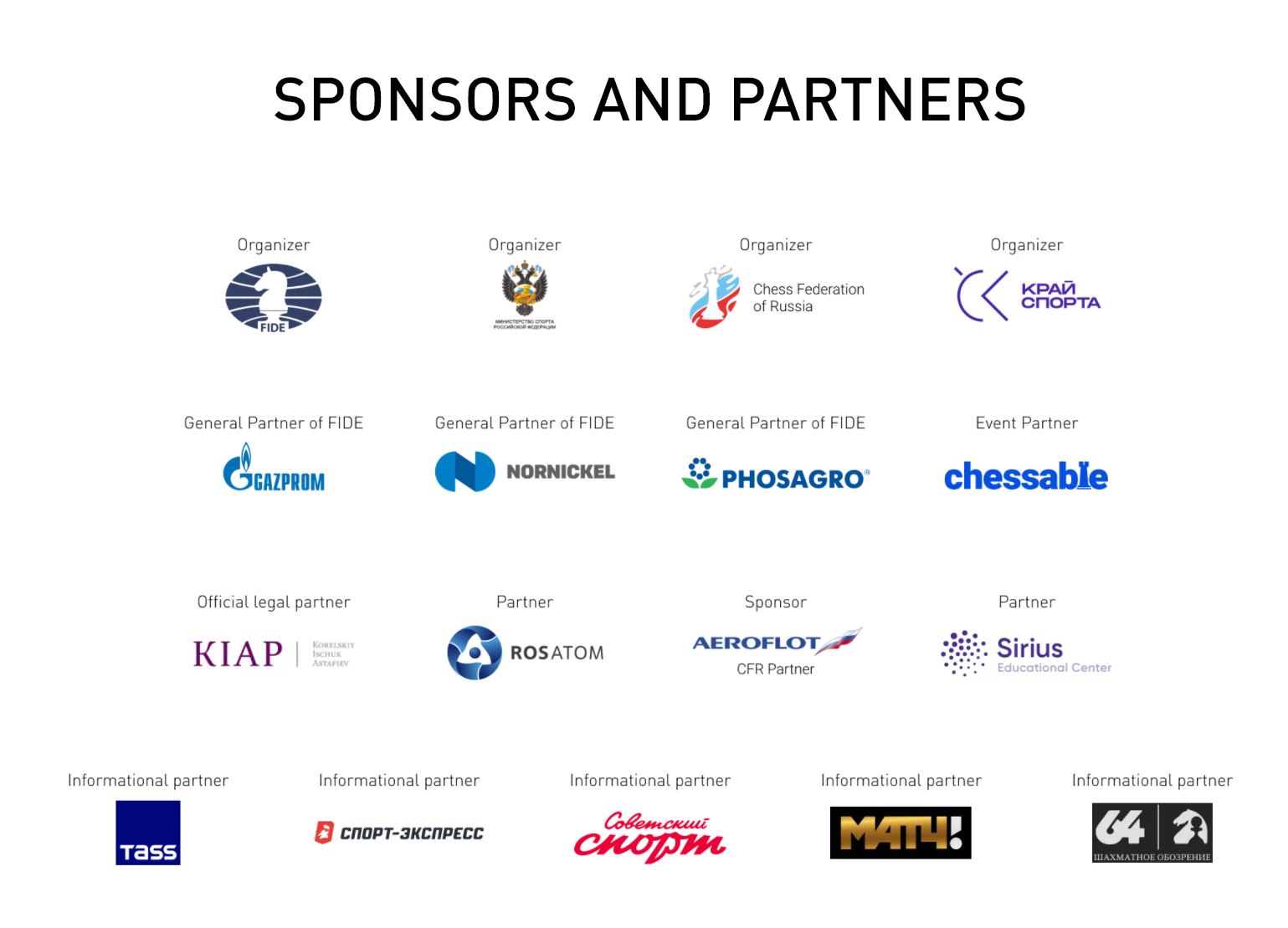