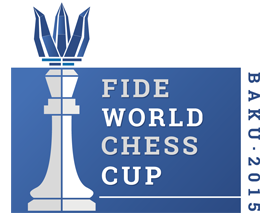 The opening ceremony of the 2015 World Chess Cup officially opened the championship qualifier. One-hundred and twenty eight players have arrived in Baku, Azerbaijan carrying their flags to compete for a chance and glory… and perhaps a chance at competing in the World Candidate’s tournament in March 2016. According to fide.com,

There was of course a drawing of lots resulting in Veselin Topalov starting with the white pieces. A number of the top players were on hand including eight of the players from the recently-ended Sinquefield Cup. Vladimir Kramnik won the 2013 World Chess Cup in Tromso, Norway and will be on hand to vie for another chance at the the world crown. Viswanathan Anand is has automatic seeding in the Candidates and is the only top player not competing in the event. It should be an exciting!

The total prize fund is $1,600,000 (about €1,400,000) and the winner and runner up will qualify to the 2016 Candidates tournament to determine who will compete in the World Cup. Each of the matches will comprise of two game matches, plus tiebreaks, if necessary. The last standing after the previous rounds will enter a seventh round of four games, plus tiebreaks if necessary. Players receive 90 minutes for the first 40 moves followed by 30 minutes for the rest of the game plus 30 seconds per move starting from move one.

Video by Big in Baku