On April 19th, the 2020 World Candidates tournament will resume after being postponed to due the COVID-19 pandemic that swept the globe. There is optimism and relief that over-the-board chess will resume this season after the world essentially hibernated to ride out the pandemic.

Early last year, it appeared that the tournament would be in jeopardy after Teimour Radjabov pulled out and others were concerned about the looming threat of the virus. Ding Liren had to quarantine two weeks prior to the tournament’s beginning due to his leaving the virus epicenter. Wang Hao expressed his objection to continuing the event. Despite these concerns, FIDE and the Russian hosts decided to continue with the tournament with added precautions. 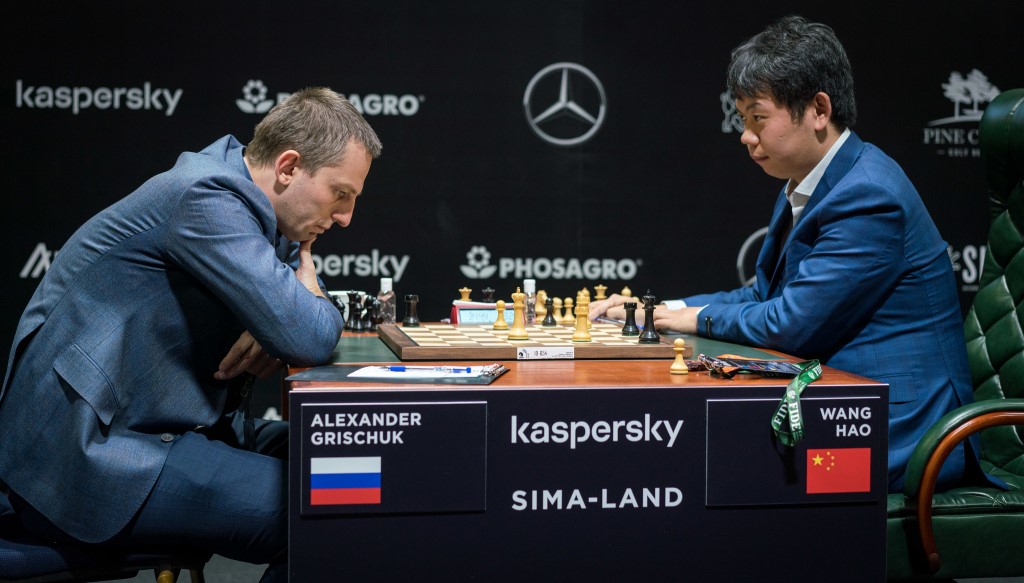 Neither Grischuk, nor Wang Hao enjoyed the first half.
Photo by Lennart Ootes

As the tournament wore on, anxiety increased as reports of rapidly spreading infection. Grischuk weighed in on the experience by saying, “I have a clear opinion that the event should be stopped. The atmosphere is very hostile.” Midway through after the 7th round, officials decided to postpone the tournament due to the inevitable closing of borders.

During the whole tournament, I felt I was distracted. I was worrying about flights, seeing bad news about China… Now if we enter China, we will be quarantined for two weeks. I could just have arrived from Tokyo to Beijing and quarantine at home, now I don’t think that is possible.

The second half will be hotly-contested as only two points separate the field. After seven rounds of play, Maxime Vachier-Lagrave of France shares the lead with Russia’s Ian Nepomniachtchi with 4½ points. Fabiano Caruana (USA), Anish Giri (Netherlands), Wang Hao (China) and Alexander Grischuk (Russia) are all in joint second with 3½ points. Ding Liren and Kiriil Alekseenko round out the field with 2½ points.

For the chess world, the pandemic has had a silver lining. Chess actually blossomed during the pandemic as players streamed to the online platform (pun intended). Streaming chess had been called the “second boom” as players around the world competed in all types of tournaments. Apart from the activity was the fact that communities were built and new friendships and alliances were formed.

That being said, the sentiment is spreading that while online chess filled a void, players were longing for the social interaction that is the foundation of chess competition. Playing on a vertical screen with a digital chessboard and a mouse isn’t the same as the OTB experience. The online platform can be a stop-gap for any interruption of tournament play, but will never replace the very thing that attracted us to the game. Which of us learned chess playing blitz? OTB classical is here to stay and glad it is back!