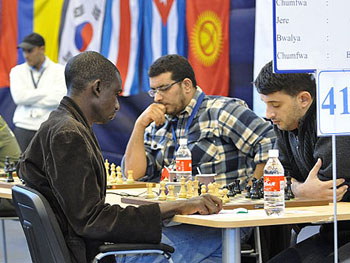 Zambia has had quite a bit to to celebrate in past years, but the men’s performance in the recently-ended 39th Chess Olympiad in Khanty-Mansiysk is the most recent of its accomplishments. Stanley Chumfwa led the charge of the 121st-ranked Zambian team to reach a record 47th place! A key win over Turkmenistan ended the tournament on a high note as Zambia took the Category E prize. Chumfwa’s win over GM Mesgen Amanov created a buzz around the tournament. While white made crucial mistakes in the end, the sacrifices showed a lot of imagination. (See Amanov-Chumfwa)

Of course, there was a notice of the absence of Zambia’s top player Amon Simutowe who is currently undertaking advanced studies at Oxford in England. Imagine what could have been if the “Zambezi Shark” were present. Nevertheless, Zambia’s Chumfwa (7½/10) and FM Daniel Jere (6½/10) rose to the occasion and helped the team take home the gold. Gillan Bwalya scored a respectable 4/8 in his Olympiad debut; Kelvin Chumfwa had 2/8 and Andrew Kayonde was on 5/8. Zambian women had some high moments with a couple of impressive wins.