As a state delegate and a former board member of the Florida Chess Association, I have had the honor to participate in the decision-making process of our governing body. The Executive Board and Delegates meetings are exciting arenas for exchanging ideas about chess and learning how the organization functions. I remember being critical of an organization I was a member of until I worked for the national headquarters. Sometimes you can’t see the complete picture as a mere member. The same is true in U.S. Chess. 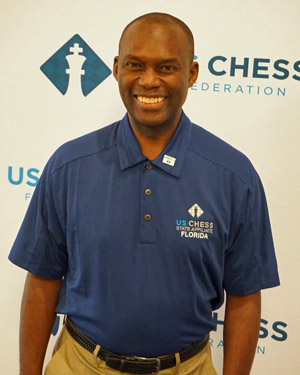 At the 2019 U.S. Open in Orlando as a Florida Delegate

Being involved in chess policy-making is not going to be everyone’s cup of tea. Most of us started as players and some as chess parents. All of us have our preferences. Have you ever thought of why people have taken the roles they take in chess? Why do some of us enjoy directing tournaments? Why do people like Bill Goichberg decide to make his legacy in hosting and directing tournaments? Why have I spent 20 years in chess journalism instead of focusing my energy on tournament chess? You also have people like the recently deceased Harold Winston who became a life-long chess politician after running scholastic tournaments in Chicago. I enjoyed playing in them and thanked him years later. 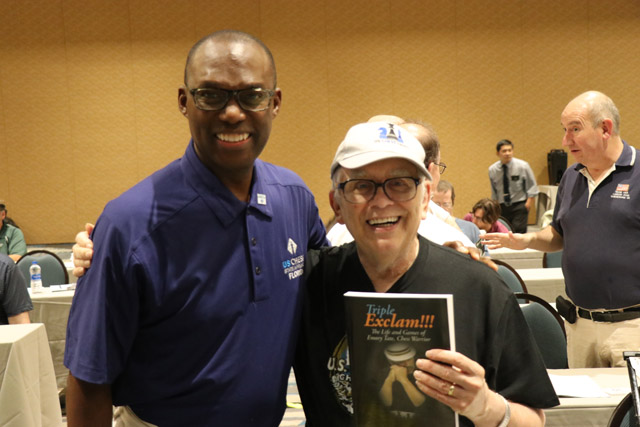 Presenting Harold Winston with a copy of Triple Exclam at the Delegates’ meeting. I played in his scholastic tournaments held at the University of Chicago. Attorney Winston passed away in early April. Photo by Daaim Shabazz/The Chess Drum

Ability of a Disability

In my 40 years of tournament participation, and my 20 years of covering chess activities in the Black community that the number of this segment competing in chess tournaments is proportionally low. U.S. Chess collects no demographic data on ethnicity. However, with some level of certainty, we can say that the level of participation is not proportional to the population (13.4%).

Currently, there is a lot of effort in focusing on gender issues, and since those data are known, the numbers are easier to analyze and address. There are commissions to engage more girls and women to play chess. It’s a good thing. There are also new initiatives for seniors (50+) and juniors. On the other hand, the public has always been skittish about discussing racial demographics because of the sensitive nature of the subject. Race/racism is still a hot-button topic, and it has even tarnished chess. FIDE made a statement on racism (as did U.S. Chess) and I penned a response on these pages.

In my view, there needs to be more diversity in chess policy. In this, I am not merely talking about the ethnicity of people making the decisions, but the diversity of ideas. 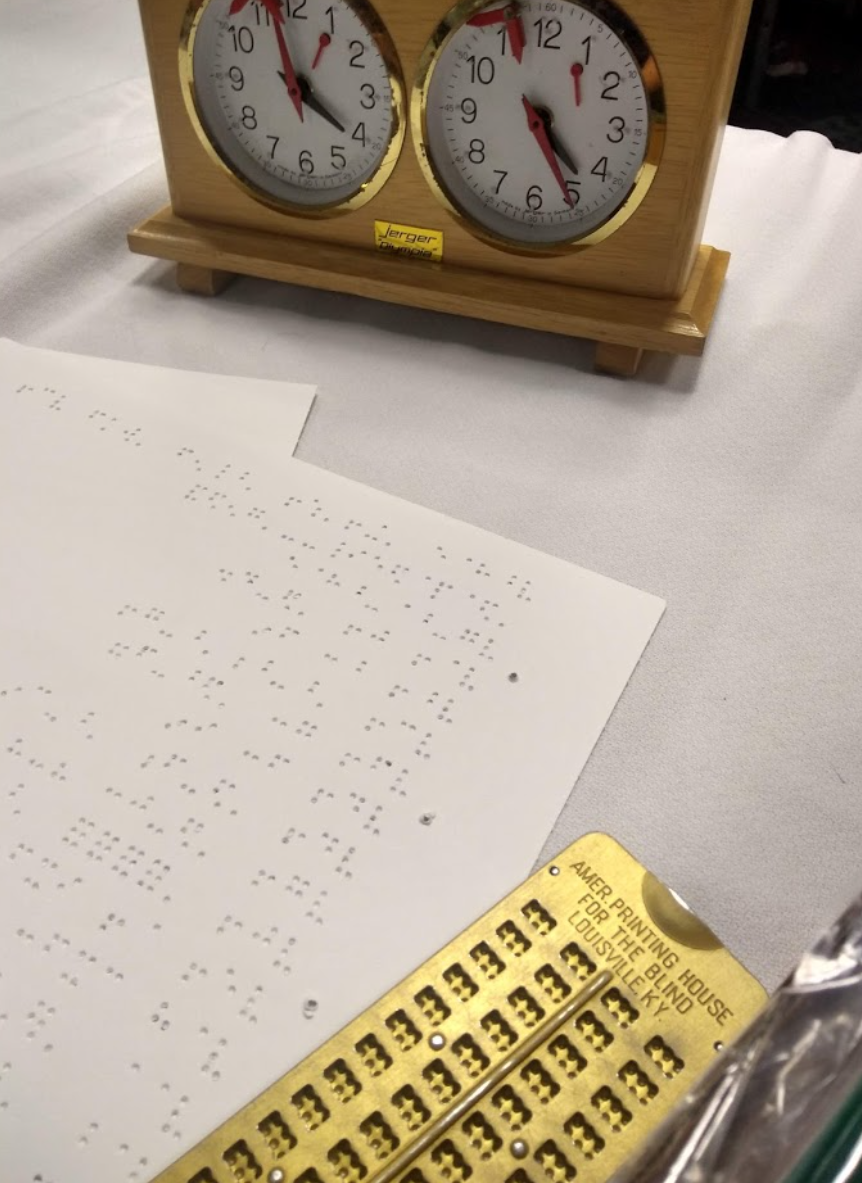 Besides ethnic segments, there is also limited attention given to the disabled. I remember Joe Kennedy, Jr., a quadriplegic player from Indiana who won the blind championship eight times as a Expert-rated player. I watched his family wheel him to the table and position him near his braille board. In between moves, I would check on his games.

I remember a horrible event that may discourage a visually-impaired player from playing in an over-the-board (OTB) tournament. It is already a challenge, but then there may be implicit bias. One player forced a visually-impaired player to move a piece he grabbed accidentally. When the player insisted that he move the touched piece, he says, “I’m legally blind, and you make me move the piece?” After winning the game, the accusing player simply gathered his things, said nothing, and walked away. It was awful.

Not every blind player is as adept as Albert Sandrin, who played on a regular board with his brother Angelo Sandrin, recording the moves for him. I once saw a Grandmaster showing Sandrin his game by telling him the moves. It was intriguing to see this, even though I knew he could follow the game easily. Sandrin won the 1949 U.S. Open and the U.S. Blind a couple of times.

These are fascinating stories. Perhaps there are many more stories like this, but disabled players remain on the fringe. The U.S. Blind Championship seems to get little attention and the U.S. Blind Chess Association is barely known. Alex Relyea has been a noble advocate for disabled chess players. Incidentally, the U.S. team placed joint 10th in the 1st Online FIDE Chess Olympiad For People With Disabilities.

My first foray into chess politics when I served three years on the Board of Directors of the Florida Chess Association under both William Bowman and Kevin Pryor. Florida is a very long state (eight hours drive from Tallahassee to Miami), so logistical challenges move many state-wide activities toward Orlando. Florida is very tournament friendly with the demographic suiting both juniors and seniors. 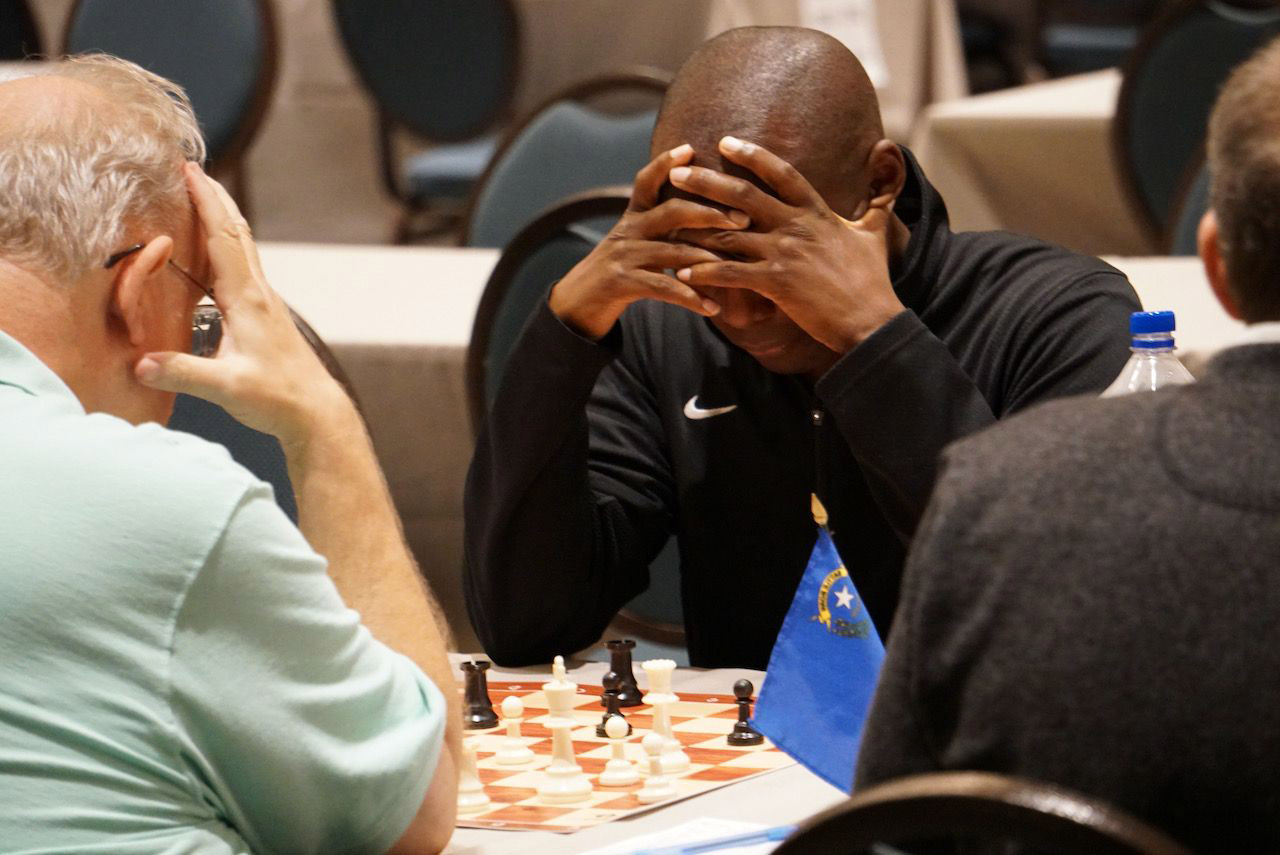 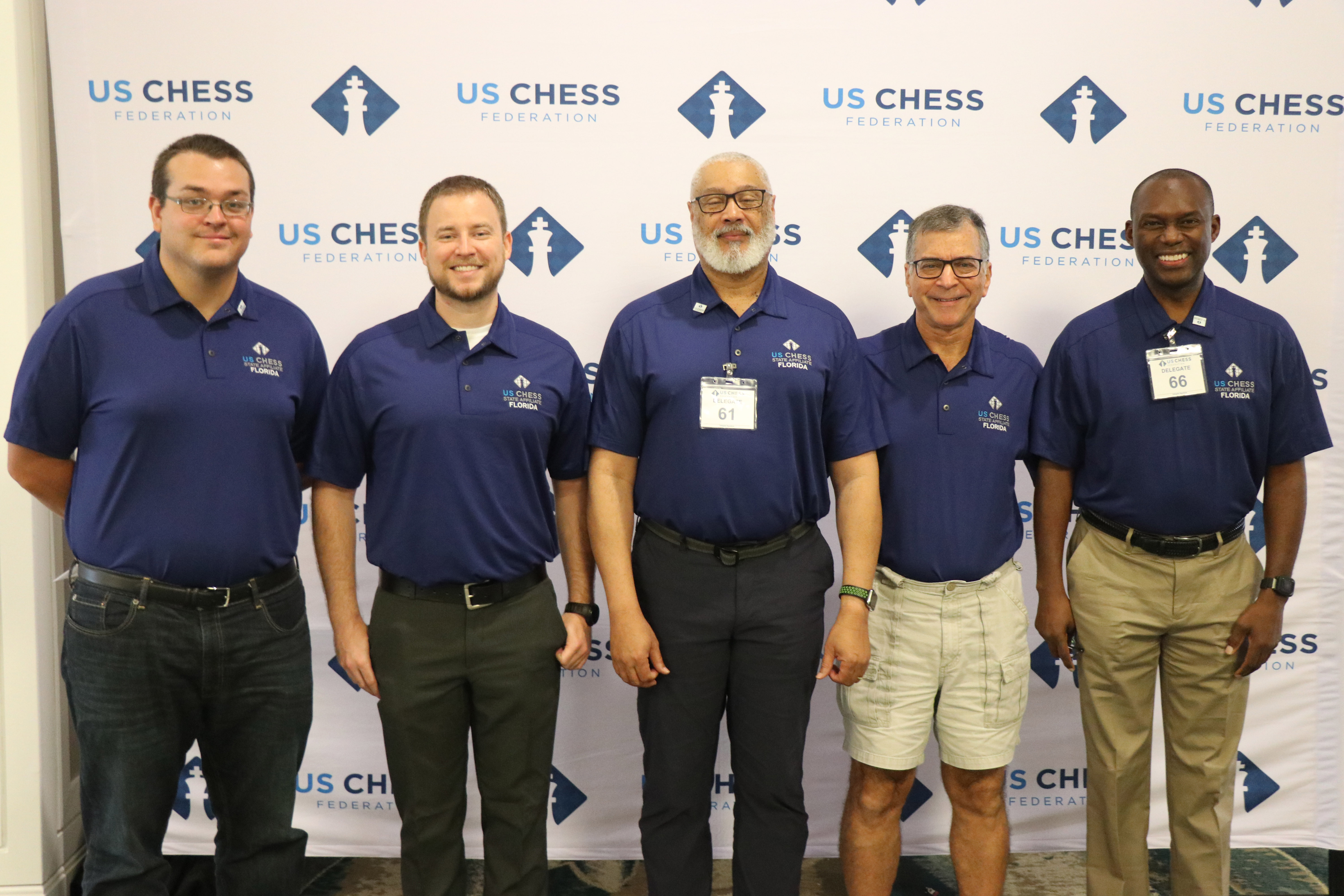 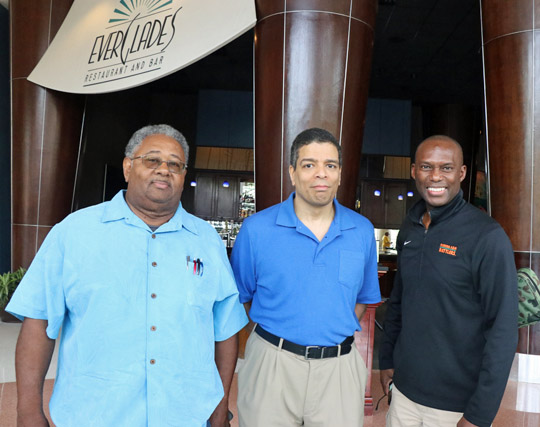 It is understood that most in the chess community merely want to play chess, not organize tournaments, direct tournaments, coach scholastic players, or engage in policy decisions. Many are happy playing in whatever tournaments they can. However, it is important to be aware of policy decisions that affect the ability to participate in these tournaments.

There was an air of optimism in the Executive Board and Delegates meetings, and President Allen Priest was very able in navigating the agenda. The business meetings were very interesting, and workshops are held designed to improve different functions of the organizations. In the delegates’ meeting, I got a chance to meet some of the other state delegates, some familiar faces, and many new ones.

I also attended some of the many workshops. Some committee meetings were: Rules, College Chess, Ethics, Communications, Scholastic, Senior Chess, and Women’s Chess. I attended the rules committee and was able to bring up the issue of death at the chessboard, an issue that I have written about on these pages.

Stand Up and Be Counted! 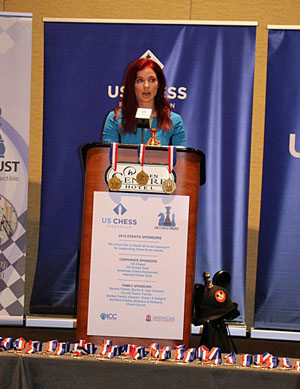 <
Jennifer Shahade encourages girls at the award ceremony
of the 2019 Haring Tournament of Champions.
Photo by Daaim Shabazz/The Chess Drum

“Women’s Chess” has been receiving a lot of momentum with Jennifer Shahade and others leading the initiative. The chess community lends active support to increasing the participation of girls and women, which is a very positive development as far as the growth of chess is concerned.

As much as we applaud these efforts, it is very simplistic to believe that increasing the participation of girls/women is a goal desired only by that group. It would be equally naive to accept that only the disabled would advocate for the rights of those disabled or that Blacks would be the only ones pushing for more ethnic representation. Unfortunately, that is the way it is has been in American society. Every group segment initiates the fight for its own cause. This is understandable, but this represents neither a diversity of thinking nor a holistic way of problem-solving.

On a personal level, I have memories of two individuals who openly advocated for more participation of Black chess players. Without professing an agenda, my coach Tom Fineberg provided an arena for greater participation on the southside of Chicago. It was a passion of his until he passed away. There was also the legacy of Jerry Bibuld was often criticized for his advocacy of Black players. These men not only had diversity in their thinking, but more importantly, sought to create a favorable outcome for chess. 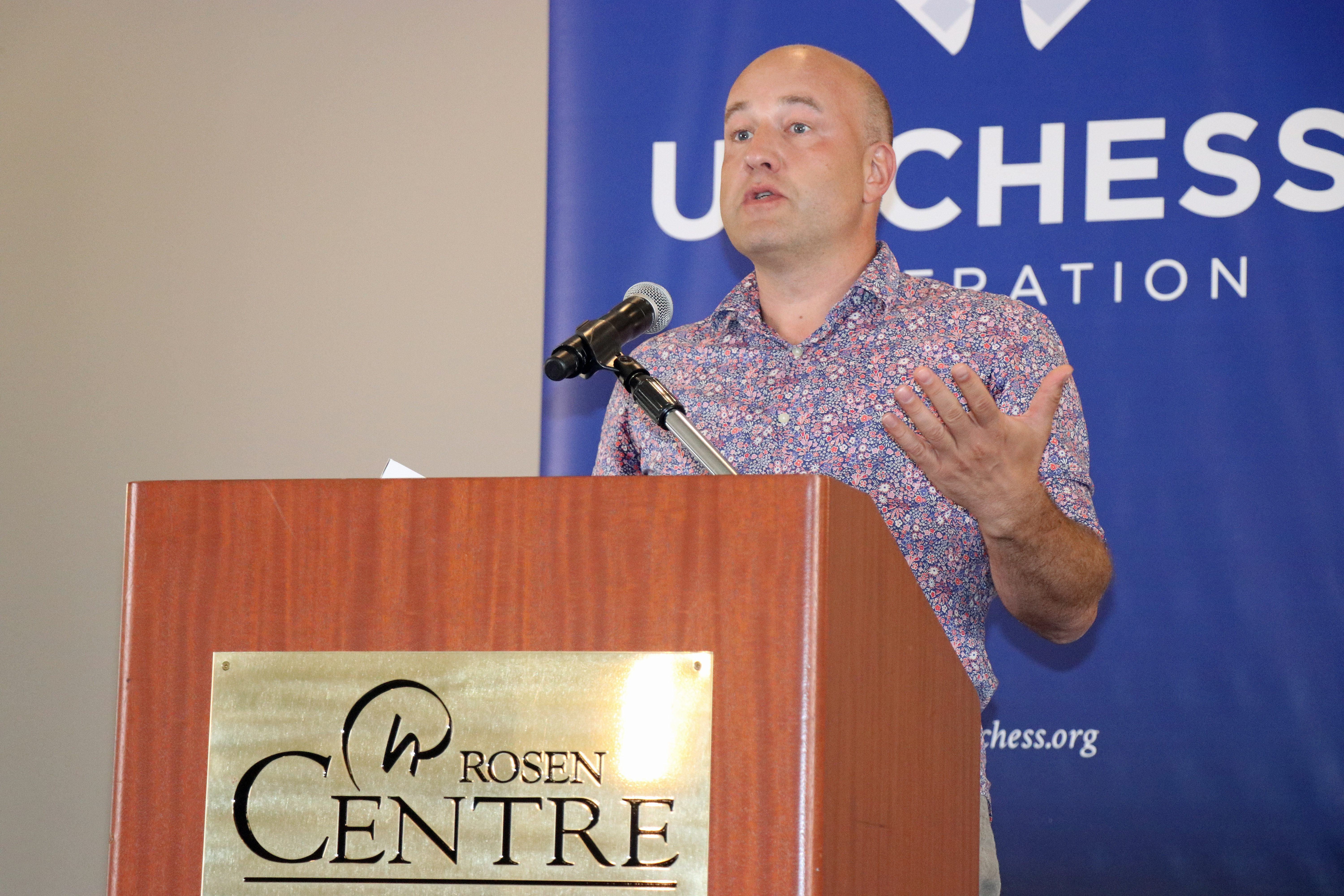 GM Alexander Shabalov is still dangerous over the chessboard, but is an advocate for “Senior Chess.” Photo by Daaim Shabazz/The Chess Drum

Senior chess has gotten a boost with the new “Senior Tournament of Champions.” Alexander Shabalov praised the move at the Banquet and pridefully announced the U.S. gold medal at the 2019 World Senior Team Championships (50+ section). They would repeat in 2020. With the changing of demographics in chess tournaments, perhaps there are more needs as far senior issues are concerned.

In my particular circles, I frequently hear chatter about the lack of Black representation in the upper echelons of chess. Yes, these issues do matter, but what do we do about it?

What does all this mean? Perhaps we need more creativity. That pertains to addressing topics like outreach for underrepresented communities, more engagement with FIDE and international standards for tournaments, and more creative initiatives to elevate the profile of chess (i.e., Olympiad, World tournaments). There is also a tremendous void in writing about diverse topics in terms of chess content. If underrepresented communities within chess want to affect change, we have to become more involved at the state, national and international levels of chess. 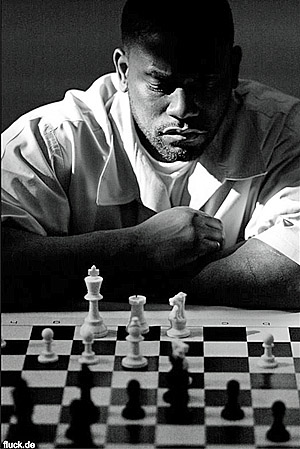 Running The Chess Drum for 20 years has given me a chance to visit communities in different countries, to cover high-level events, and to see the beautiful world of chess in its glory. While I am primarily known for covering chess of the African Diaspora, I have written articles on prison chess, chess for the disabled, gender issues, and unheralded players in obscure locations. In my particular circles, I frequently hear chatter about the lack of Black representation in the upper echelons of chess. Yes, these issues do matter, but what do we do about it?

There is a way to have these issues addressed, but it is not to merely complain, show ambivalence, or disengage. Initiatives will initially come from within the affected segment or through those who express diversity in thinking. Bibuld organized the “Wilbert Paige Memorial Tournament” which was celebrated worldwide as a bold attempt to showcase master-level players of the African Diaspora. We all should be interested in seeing the chess community grow in different ways, and not when it only benefits our own special-interest group. Far too often, that is the prism through which problems are seen in the U.S.

I have cherished memories of my high school coach Thomas Fineberg lugging his tattered bags of chess sets and boards to Tuley Park on Saturdays. That made a deep impression on me and showed me how someone could be selflessly dedicated to chess. In addition, this corpulent, grey-bearded, asthmatic man gave every bit of his time to chess with the blessing of his wife, Maxine. What was even more important to me is that he provided players on the south side of Chicago the opportunities to play competitively. 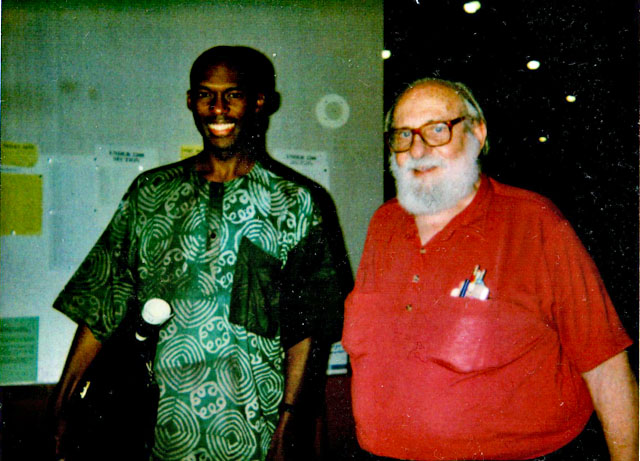 Those who have been involved in chess and have professional backgrounds could serve chess in many constructive ways. Perhaps it is as a Tournament Director, coach/trainer, tournament organizer, photographer, or journalist. Maybe we may vie for a position on the U.S. Chess Executive Board or serve on a FIDE committee. We are not talking about choosing people for particular positions based on their ethnicity, gender, or age. For me, the issue is to bring up diverse topics and diverse thinking to advance the cause of chess.