The United States Chess Federation (USCF) is currently celebrating its 75th anniversary during the U.S. Open Chess Tournament. America’s most prestigious open tournament is taking place at the Rosen Centre Hotel (9840 International Dr., Orlando FL 32819) in the vacation hub of Orlando, Florida, the home of the Disney franchise. Months ago the United States Chess Federation announced a switch from St. Louis to Orlando given the closing of the Milliennium Hotel in St. Louis.

The tournament is being held from July 26th-August 3rd in three formats: traditional, six-day and four-day. 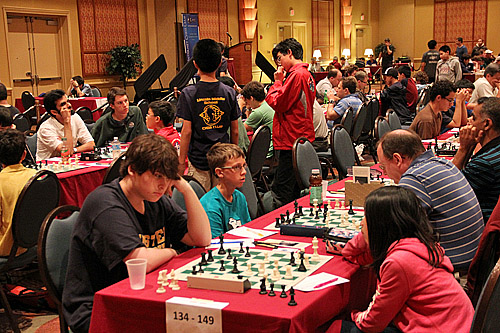 Scholastic players are out in full force!

The tournament generally does not draw the strongest field, but usually will attract a lot of legendary figures who have made it a tradition to compete in America’s staple chess event. It is also the time when the business of the USCF is conducted. This festival also includes a number of other tournaments including the Denker High School Champions Tournaments, the K8 Barber tournament and the National Girls Invitational. There are also tournaments for Blitz, Bughouse and Mixed Doubles.

This year the U.S. Open will have GM Illia Nyzhnyk of the Ukraine as the top seed along with GMs Giorgi Margvelashvili and Alexander Shabalov. Some of the legends taking part are GMs Ron Henley and James Tarjan. One of the most notable trends in American tournaments is the presence of scholastic players. Spanning the room of a tournament hall will give an idea of the youth movement of chess. While legendary stars dot the hall, tomorrow’s stars are being borne.