I have received some regrettable news from Majorie (Fineberg) Winther that Tom Fineberg died peacefully amongst family and friends on Sunday night, May 27th. He was 89 years old. I had the pleasure of taking up chess at Chicago Vocational High School (CVS) and becoming one of approximately 100 members at the perennial high school chess powerhouse. It was at this school that I was exposed to the passion of “Coach Fineberg” and is where I discovered that I may have some talent for the game. While I am only one of the thousands of his chess players still active, I owe my initial passion, in great part, to the efforts of my coach. We ALL owe him a debt of gratitude for his tireless efforts in the Chicago area.

I met Tom Fineberg at CVS after attending the chess club once as a freshman. After playing some games with a classmate named Cornelius Plunkett, he suggested that I visit the club and I finally went to sign up in December 1977. In my sophomore year, I became a regular at chess club which was held every day in the chemistry lab. Chess competition was fierce and there were always different players dropping in.

At the time I attended CVS (1976-1980), it was a Class 4A school with more than 4,000 students and dominant in sports and vocational-technical training. Fineberg taught mathematics and ran the chess club. He was quite a tireless organizer and totally dedicated to a life of chess. There were also ways that his intellectual brilliance shined. While we were in the car with him traveling to matches, he would always devise mathematical puzzles on random objects and signs. For example, he would try to determine whether a number on the license plate or billboard was a prime number! Amazing.

Fineberg had devised a club “ladder rating list” and started all new members at 700. The threshold for being a decent player was 1000 and you had to “climb the ladder” so to speak. There were 100 players in the club and we charted our progress on the list that he printed out religiously and displayed in the club. He had developed a computer program for the calculations (using the U.S. Chess Federation formula). Fineberg was proud of CVS and always dropped names of alumni players such as Roger Hickman, Barry Johnson, Marvin Johnson, Marvin Dandridge, Derrick Suddeth, Gene Coleman, Demetrius Hale and a host of other players. It was good to know that we had such a venerable tradition at the school. 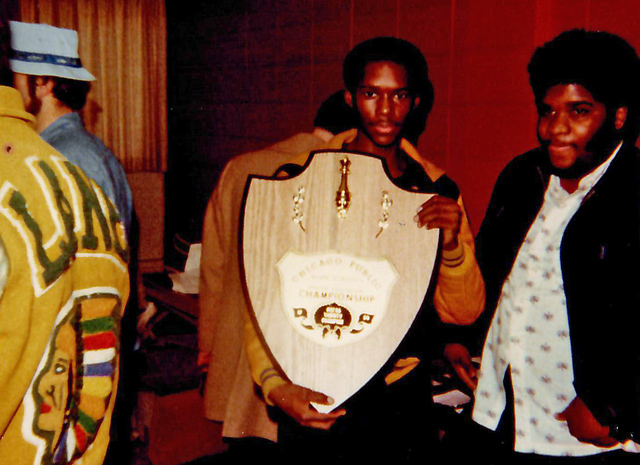 I ended my senior year at around 1500 (CVS ladder). I was proud of this 800-point improvement until I started playing in open tournaments and realized that 1500 in the U.S. Chess Federation was not considered strong. I always teased Fineberg about prohibiting his players from competing in “professional” tournaments. He cited an Illinois High School Association (IHSA) rule and loss of eligibility if players were winning money. Thus, we were all grossly underrated. We won the 1980 City Championship against all odds and (coming 9th in state). When I left CVS, I was approximately 1300-1400 USCF and less than two years later I had reached 2000. It was good that Fineberg kept us humble.

As a player, coach never got much above 1800, but he was fond of his Grand Prix attack (1.e4 c5 2.Nc3 d6 3.f4). At the CVS club, he was almost unbeatable to newcomers and would show no pity. He coined the term, “milking” that was used when somebody was beaten badly and thus their rating points were milked from them. He would give you pointers during the game and afterwards, but he snapped your pieces off with glee.

He was an habitual kibitzer (talking during your game) and he had key phrases like “PPMBP” for “passed pawns must be pushed”. He was rather jovial and you would often have to put up with his singing like “backward pawn on a open file” (to Nat King Cole’s tune “Chestnuts roasting on an open fire”). He had a chess jingle that started, “My knight is on queen-six and it can’t be driven away. You’ll have to sack your rook for it or that’s where it will stay.”

Then his chess chant before our team matches…

Knights to the center!
Rooks on the seventh!
Queenside Majority!
Remote Passed Pawn!

We kept laughing… and winning. It was an enjoyable environment and competitive. Fineberg brought this infectious spirit to the Tuley Park Chess Club on 91st and King Drive. At this club, we met on Saturdays from 12-5pm. It was there that I met my first extended chess family. I will never forget him lugging countless bags with chess boards and sets and setting up for Tuley Park club. It would be rain, snow or shine and you could set your clock by Fineberg’s chess meetings… 12noon sharp!

Coach would even engage in trash-talking and if he scored an upset win, he’d sing “Ta dahhhh!” and pump his fists in the air. Perhaps he picked up some of his trash-talking skills from his most-prized pupil Marvin Dandridge who won a city title with CVS in 1975. It was Dandridge who led Tuley Park with his raucous humour and hearty laughter. Dandridge would sometimes come to visit CVS and give a simul or attend one of our matches. Coach had to be on his toes with Dandridge’s sense of humour. Some of the jokes were mighty off-color, but coach didn’t mind being the butt of his jokes and would always take the jokes in stride.

Tom Fineberg with one of his Harlan High chess pupils in James Fagan.

While Fineberg continued with his weekly meetings at Tuley Park, he retired from CVS and then began volunteering at Harlan H.S. where he nurtured James Fagan and Sedrick Prude, who both became Experts. He also mentored at Beasley Elementary and there helped to produce National Master Kayin Barclay who would star at Whitney Young Magnet. He also coached at Orr H.S. which saw national success. He played an instrumental role in scholastic chess and along with Tom Larson (now deceased), they made quite an impact in sharing the game of chess to perhaps thousands of students in the Chicago Public Schools. Their efforts were particularly noted in exposing chess to Black youth.

Tom Fineberg at Harper Court in 2003. He lead a protestation movement to have the benches put back. His dedication brought folding tables out so we could play. (see story)

He was also a fixture at Harper Square (53rd and Harper) and regularly played there. When the Harper Court Foundation decided to remove the six concrete chess benches, he led a protest to have them put back. There were all kinds of letters written until they decided on a concession that would allow players to congregate if they used folding tables which were stored in one of the stores. Essentially it was the end of an era, but Fineberg fought until the end.

About five years ago, I get an e-mail from William Aramil who was organizing a tribute for Fineberg. Aramil was a big supporter of Fineberg’s tournaments and wanted to do something special. I told him I could not be present, so I sent a statement. That event took place on June 2, 2007 at Tuley Park, 91st King Dr. in Chicago. There were some former players, long-time supporters and fellow chess promoters on hand. Chicago-born, Indiana-bred legend Emory Tate (now International Master) was on hand as well many Chicago area players such as Sam Ford, Patrick Magee, the Cohen brothers Howard and Larry, Kayin Barclay, Issac Braswell (deceased), Tyrone Lee (deceased), William Blackman and many others.

His doting wife Maxine was present and received a bouquet. Words of tribute were read to Fineberg and in my tribute, I mentioned his chess jingles. I understand that he was prompted to sing one of them and he immediately complied with glee. It was a fitting celebration for the Chicago legend, but only a small token for appreciation by Chicago area players. We are all indebted for his decades of chess service. (see tribute)

Thanks Coach for sharing your love of chess!
Your efforts will never be forgotten.