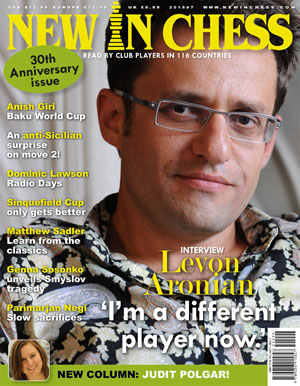 The year is almost over. There were some bright moments and the conclusion of the first Grand Chess Tour was one of them. Billed as a an effort to spur interest in chess and to “help solidify the partnership between the organizers.” After the Norway Chess (won by Veselin Topalov) and Sinquefield Cup (won by Levon Aronian), the last event will be the London Chess Classic with Viswanathan Anand as the defending champion.

Levon Aronian’s win in St. Louis highlighted the latest issue of New In Chess (NIC). It was remarkable considering his lackluster results in the past year. It was a welcome change of fortune for the affable Armenian who famously (and controversially) shared a training session with Magnus Carlsen. Perhaps this was his recipe for success, but what explains Carlsen’s demise? The World Champion has been in a funk this year and some are saying something is amiss in his camp. 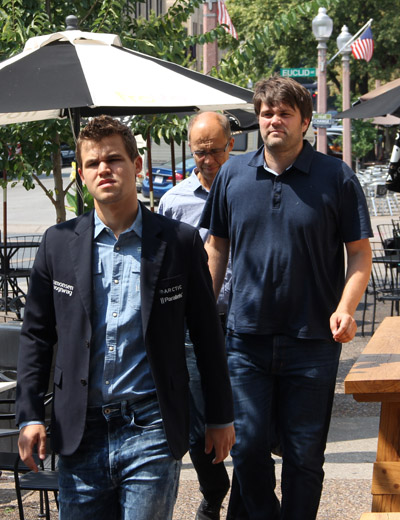 The Carlsen team was unable to solve the field.
Photo by Daaim Shabazz.

Aronian beat all three of the American players in the field to help him coast to victory and vault back into the top ten. He stated that after a bit of soul-searching, he was able renew his chess vows. His interview with NIC editor Dirk Jan ten Geuzendam was a peek inside the mind of a professional chess player. Aronian gave his insights as to what may be affecting his colleague Carlsen.

“I don’t think there is anything wrong with him. The guy has been winning tournament after tournament and now he didn’t win two tournament in a row. It’s like somebody writing nine symphonies and then writing a ballad that is perhaps not so good.”

The World Chess Cup was aptly featured as a main story given its status as a marquee event and a qualifier for the World Championship. The format is a knock-out of 128 players from around the world. We always look for the occasional upset and the breakout performance. In the end there were the usual suspects, but China’s Wei Yi gave a glimpse of what the future may hold. In the end, Sergei Karjakin held the trophy aloft. 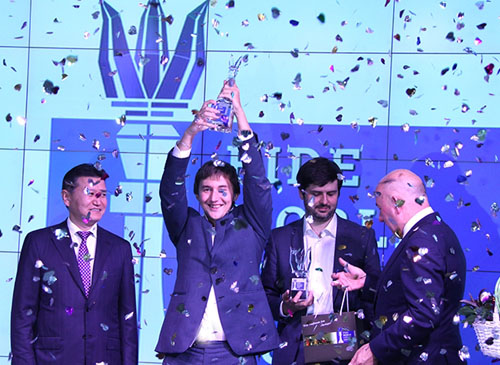 It was a tortuous path, but Karjakin would be rewarded in the end.
Photo by FIDE.

There was a short feature done on Millionaire Chess Open by GM Robert Hess. For the past two years, the world has been discussing this novel tournament with a prize fund of US$1000,000. Conversations have taken many different tones from loyal supporters to vituperative “haters”. Nevertheless, the event drew approximately 600 players (including 50 GMs) from 50 countries. In the end, Hikaru Nakamura emerged victorious after almost being derailed after a controversy. Nakamura finally toppled Le Quang Liem to win the $100,000 first prize. 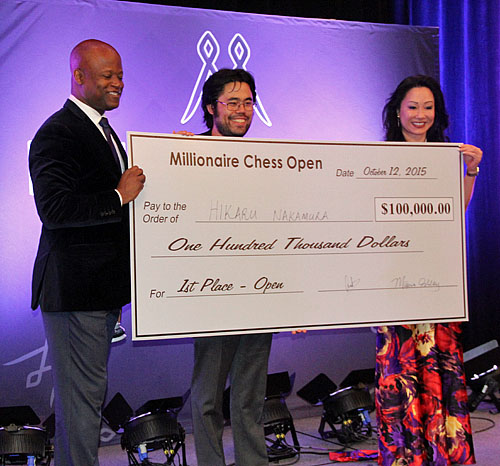 Given that the Sicilian Defense remains as one of the most common responses for black, there has always been experiments on how to sidestep preparation. There is 1.e4 c5 2.b3, 1.e5 c5 2.c3, 1.e4 c5 2.Nc3 and even 1.e4 c5 2.Na3!? GM Jeroen Bosch wrote a piece on yet another attempt… 1.e4 c5 2.Be2!? He offers that this move order aims for familiar structures often seen in the Grand Prix Attack (GPA) and the c3-Sicilian. There are several instructive examples including Vladimir Fedoseev-Yu Yangyi, 1-0 (42).

It does appear as if Russia is gaining some momentum winning the past World Junior Championship and recently winning both the European Team and European Women’s Championships. Mikhail Antipov of Russia won the competition, but Loek van Wely’s article was a ode to the chess coach. Many of the stories were humorous allegories.

Lastly, there has been a welcome addition to the New in Chess magazine and that is the feature of Judit Polgar. Polgar has retired, but remains active in promoting chess in a variety of ways. In this issue, she writes about the attacking king. It is ironic because all Polgar did was attack her opponents’ kings throughout her entire career!

Her article highlighted games in which the king acted as an attacking piece aiding in cornering the enemy king. Very instructive! The Chess Drum featured a similar article done on the topic on ChessBase. The illustrative game was Hamppe-Meitner, Vienna 1872 and Short-Timman, Tilburg, 1991. It is always good to see this unusual theme expressed in top-level games.