It will be steaming hot in St. Louis over the next couple of weeks. Actually the weather is quite pleasant, but the world best chess players will set the boards ablaze in one of the strongest tournaments on American soil. The third Sinquefield Cup will commence on August 23rd with the Opening Ceremonies and drawing of colors.

This third iteration will be hosted by the Chess Club and Scholastic Center of Saint Louis (CCSCSL), dubbed the “capital of American chess”. This will be the second event of the Grand Chess Tour and will expand to feature ten of the world’s top players. Veselin Topalov won the inaugural event in Norway two months ago. The last event will be the London Classic in December.

According to the official press release:

The angle of the story centers around the excitement of the three marquee players representing the U.S. in Hikaru Nakamura, Fabiano Caruana and tournament wild card Wesley So. While Caruana won last year’s Sinquefield Cup, this is his first home tournament representing the U.S. flag. There will certainly be a lot of excitement and press coverage as the momentum continues to blossom in American chess. 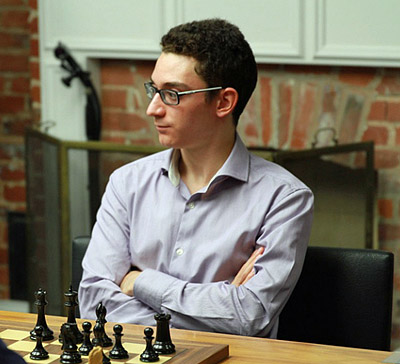 Fabiano Caruana started with a blistering 7/7 last year enroute to an impression win, but the star-studded field will certainly be ready to wrest away his champion’s reign. Photo by uschesschamps.com.

The autograph session was held today and the first round will start at 1:00pm Central Time USA. Games will start at 1:00pm St. Louis (11:00am Los Angeles, 2:00pm New York, 7:00pm London, 9:00pm Moscow). Live commentary will be given by an eminent line-up of Maurice Ashley, Jennifer Shahade, Yasser Seirawan, Ben Finegold, Robert Hess, Alejandro Ramirez and Ian Rogers. For more information, visit www.grandchesstour.com or follow along at @CCSCSL.