The World Open is a bonanza that attracts so many chess aficionados far and wide. Each year, droves of competitors assemble on the tournament not only to play, but to socialize and to participate in America’s most well-known tournament. The 2014 World Open would be memorable for a number of reasons.

The Chess Drum was able to conduct some very interesting interviews during the tournament. These interviews always capture the diverse backgrounds and reveal what makes people so passionate about the game. This year the interviews ranged from up-and-coming players to mid-level masters to retired legends to world-class Grandmasters! Please sit back and enjoy these interviews and feel free to give your feedback!

NM Dominique Myers (USA) – This Charlotte native discusses his quest to earn the National Master title. The full-time college student left the scholastic scene in 2010 and finally broke the 2200 barrier at the 2014 World Open. He cites FM Ron Simpson as an inspiration and dedicated his title to him. He joins an elite group of players representing the top 1% of players in the country. He also joins the coveted “Drum Majors” list of masters of African ancestry. 5:23 minutes

NM Walter Harris (USA) – This is a classic interview for the mere fact that National Master Walter Harris had not visited a chess tournament in 30-40 years. Harris shares pearls of wisdom in recounting his experiences as a player emerging in the 50s. He is known to The Chess Drum audience as the first Black player to earn the U.S. National Master title, a feat earned during his 5th place finish at the 1959 U.S. Junior Open.

He proceeds to discuss the legend of Bobby Fischer, the Marshall Chess Club, the Hawthorne Chess Club and the chess scene as it was then. He even recounted his exchanges with Fischer as an up and coming player. Fischer had later befriended one of Harris’ mentors Archie Waters. It would be Waters who helped sponsor Harris on his way to becoming a Master. Fascinating! 26:10 minutes 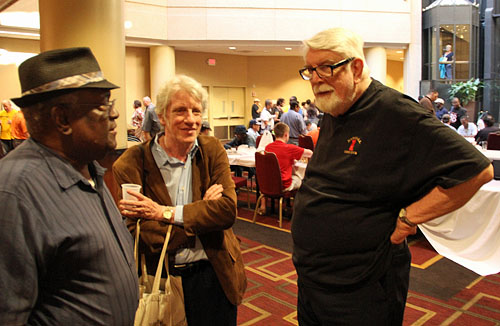 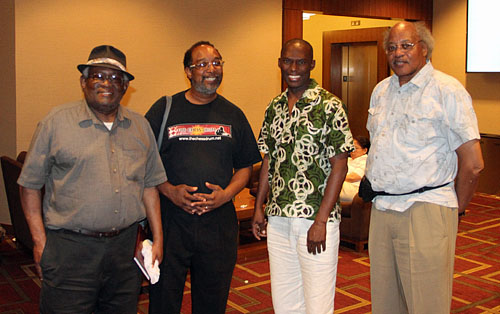 NM Frank Street (USA) – Mr. Street is a familiar face to World Open participants not because he is playing on the top boards, but because he comes every year to observe the games and socialize. Street is known by is 1965 U.S. Amateur Championship and was on the cover of the Chess Life & Review (left). He spoke about his life in chess and a very amusing anecdote about his initial exposure to the game in high school. Most of us can relate to this story. 🙂20:25 minutes

IM Kassa Korley (USA) – This senior at Duke University has had a wonderful year. He has spent this past year in Denmark for study abroad where he played in a number of tournaments. Already having one norm in 2011, he earned a second norm at the DC International two weeks before earning his third and final at the New York International. Thus, he has completed the requirements for the International Master title. In this interview, Korley discusses about some deep philosophies about his approach to the game. Very insightful! 22:32 minutes 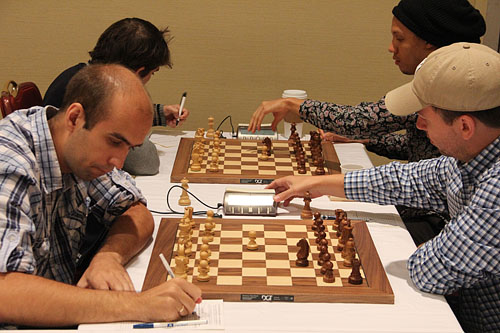 IM Farai Mandizha (Zimbabwe) – In the absence of Robert Gwaze, Mandizha will man the top board for Zimbabwe in the Tromso Olympiad. He talks about his evolution as a player, the chess scene in Zimbabwe, African chess, his work in chess education, his new marriage and what he thinks of World Champion Magnus Carlsen. 21:35 minutes 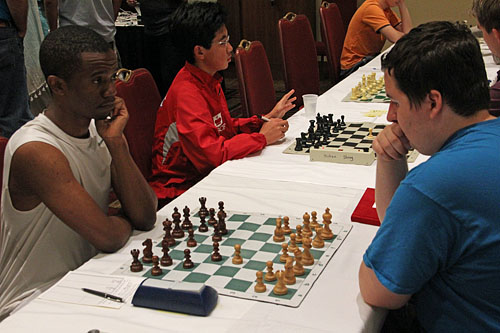 FM Philip Corbin (Barbados) – A legendary figure in Bajan chess… seven-time national champion and author of acclaimed book, “Calypso Chess“. Known as the “Caribbean Tal” he loves to play swashbuckling chess and still employs tricky openings such as the Elephant Gambit. This is his first World Open since 1985, a tournament in which he played a memorable game against Peter Chubinsky. He discusses a wide variety of topics including why he came out of retirement to play in the World Open. 14:41 minutes

Dr. Philip Corbin has had a very venerable career in Barbadian or “Bajan” chess. He is perhaps known most for his swashbuckling attacking style and affinity for the Elephant Gambit (seen in the photo). Get a copy of his book Calypso Chess here!

Uche Agu (Nigeria) – Uche trekked all the way from Nigeria with 11 other players. He discussed his impression of the tournament and what it means to the chess culture of his country. He mentions the new administration and their quest to market chess to the youth. Chess is on the rise in Nigeria. He also talks about Nigerians’ love for quick chess and why! He speaks about Millionaire Chess and appreciation of The Chess Drum! 19:31 minutes 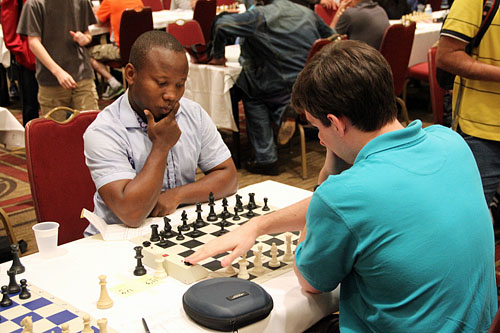 Uche Agu was among 12 players traveling from Nigeria.
Photo by Daaim Shabazz.

GM Eshan Ghaem Maghami (Iran) – Iran’s top player talks to us about his experience at the World Open. Coming to the U.S. for the third time, he shares his impressions of the tournament and the chess scene in Iran. Despite suffering jet lag from a long flight, he recovered and tallied 6.5/9. We discussed the Iran’s participation in Olympiad and the rise of chess in the Asian region. Interesting to hear from a place that is often maligned in the media.10:54 minutes 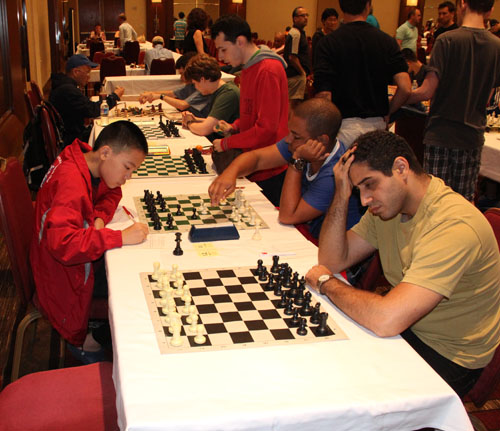 GM Ehsan Ghaem Maghami of Iran (near right) waits to begin his game. No clock. In my interview with him he complained about having to bring own equipment. This scene highlights one of the issues foreign players have when playing here. Photo by Daaim Shabazz. 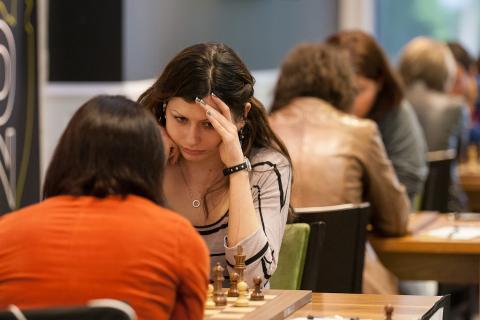 FM Alisa Melekhina shown here at the 2012 U.S. Championships. Since then she has graduated from law school and started sublite.net. Find out how she does it! Photo by CCSCSL.

FM Alisa Melekhina (USA) – Perhaps one of the most versatile players in the female circuit. A classical ballerina, her father exposed her to chess at an early age and she rose quietly and steadily to the point of qualifying for the U.S. Women’s Championship. Having just finished law school at the University of Pennsylvania, she was at the World Open visiting friends while also studying for the New York bar exam. She also shed light on her entrepreneurial endeavors and shared how she was able to multi-task so successfully. The interview also discussion women’s chess and whether there should be gender-based tournaments and titles. She also touts Maurice Ashley’s “Millionaire Chess“. 23:20 minutes