It can be said that Jerald Times has a story to tell. Having trod the stony roads of Harlem, New York, and the pastures of South Africa, he has come full circle and continued with his craft as a chess educator. On next week, he will be honored for his life’s work by the University of Texas at Dallas (UTD).

Times is known as a Maurice Ashley contemporary who reinvigorated the Mott Hall Darks Knights that won national acclaim under Ashley. Times was the subject of a 2002 article highlighting his challenges and successes.

The chess master and teacher at Mott Hall School, Jerald Times, has a thousand-watt gaze and skin the color of bitter chocolate. He radiates energy as he patrols the classroom, urging fourth and fifth graders to fight through chess problems that he has given them. Mr. Times is looking for potential prodigies who could join the Mott Hall Dark Knights, a mainly black and Latino chess team from a poor community that has won six national championships over the last decade. (link)

James Stallings, Director of Chess at UTD announced a couple of weeks ago that Times would be honored during a ZOOM ceremony. The program was originally scheduled for February 23rd, but due to the inclement weather and power outages in Texas, it has been moved to March 9th at 7:00 PM.

All of those interested in attending must reply to Jim Stallings to receive the ZOOM link. Capacity is limited. The proud Harlem native will speak on “Closing the Gap in Scholastic Chess,” a timely subject. It will be interesting to see which gap he is referring to, whether ethnic, gender or class.

In the press release, it reads:

For the first time ever, we will have the Chess Educator of the Year Event online. This should allow far more Texans to see the presentation and award ceremony. Parents and educators will enjoy this presentation. Jerald Times has a great story to tell.

Times cut his teeth in the parks of New York and joined the “Black Bear Chess of Chess,” an assemblage of competitive Black players. Ashley, FM William Morrison, and FM Ron Simpson were also members of that group. Times was one of many National Masters produced from that group and earned the title in 2002. 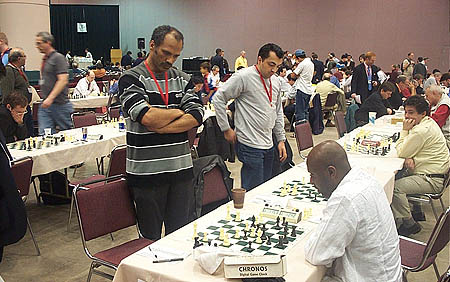 Times on his way to winning against Emory Tate
at the 2005 HB Global Chess Challenge.
Photo by Daaim Shabazz

In 2010, Jerald traveled to South Africa on a grant and became immersed in the culture of his assigned South African Township. It was only a couple decades after the end of apartheid and the wounds have not yet healed. Times did so well with his Township team that he was hired to coach the national South African team at the 2010 All-African Games before he returned to the U.S. to work at Dalton.

The South African trip gave Times international exposure that is often lacking among African-American coaches. He chronicled his observations in an interesting essay. Times is one of many selfless figures sharing his love for chess and helping to improve the game’s profile during this growth period.

Levon Aronian to play for U.S. after emigrating