Starting with 128 competitors from around the world, the World Cup will be decided in about a week. Remaining are two Russians, two Chinese, one Armenia, one Azeri, one Frenchman and one American. Starting the competition, Jeffery Xiong would have been the most improbable American to reach round five, but his focus, cool demeanor and daring play has gotten him to the quarterfinals. He won a thrilling tiebreaker against Jan-Krzysztof Duda of Poland. 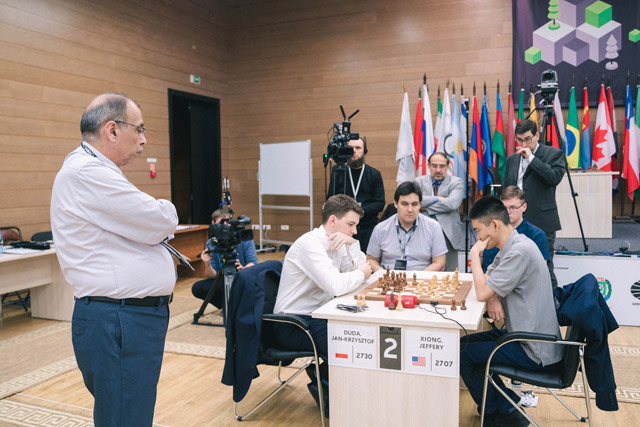 This match lasted eight games with Xiong winning on demand twice and Duda once. It appeared that the American had more chances in the match gaining an edge in the first game, but losing his way despite being an exchange up. He also missed a winning attack in game five. In a match where white won every game, Xiong said he felt confident even after falling behind in the match twice. Such bloodletting is unusual in a match.

Objectively, it wasn’t as much the dominance of white as it was some of the mistakes that were made in the match. In game four, Duda went 1.a3 and got a strange position against Xiong’s Dragon setup. Again… Xiong got a winning position only to drop an exchange and cede another tiebreak.

In game five, Xiong trotted out the Caro Kann and got another overwhelming position. After his pieces were aimed at the white king ready to deliver a knockout blow, he missed the winning 28….Ng3+! and inexplicably played 28…Re8?? To move an attacking rook on h8 to protect a pawn on e6 was strange indeed and gave Duda the time to unravel and focus on his own counterattack. The tables turned and Xiong had to win another game on demand.

Duda never quite equalized with his Petroff, but then Xiong took a chance with 18.Ne5!? At this point fatigue may have been setting in as mistakes were piling up. In a drawn ending, black allowed white to raid the kingside pawns and gain a passer which eventually morphed into a queen. Despite queening a pawn, Duda never got a chance to move his new queen and resigned two moves before checkmate.

After a draw, Xiong trotted out the Four Pawns Attack against the Alekhine, an opening you don’t often see at top level, but it is psychologically intimidating. Xiong got a strong attack against the king and the game became complicated, but salvageable. In the ensuing complications, Duda collapsed and crash out of the tournament. 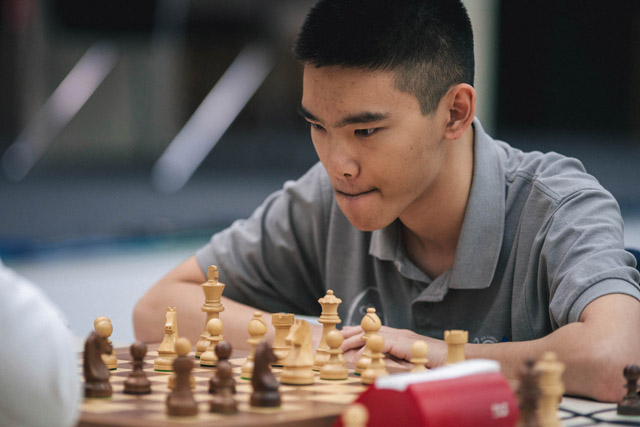 In the Ding-Alekseenko, the Cinderella story ended for the Russian as the Chinese player proved to be too strong in the rapid tiebreaks. He upset Pentala Harikrishna and had his chances against Ding Liren. In the classical games, Ding was put under pressure in both games, but was able to hold. In the rapid, Ding dominated play and the Russian crashed out.

The Grischuk-Dominguez game was interesting, but the Cuban player lost a textbook ending by mixing the move order.

Grischuk got crushed in the second game when he overextended his attack. After the win, Dominguez got nothing in his Italian game. In the last rapid game, he appeared to get lost in the complications and ended up down a piece. It would be the end for Dominguez who had previously played for Cuba making it to round 3 in 2007, round 2 in 2009, round 4 in 2011, round 3 in 2013 and round 3 in 2015. In 2017, he was in the process of switching federations.

Nikita Vituigov won a nice game against Wesley So in a study-like bishop ending. In the end the b-pawn stood for 20 moves at b7 tying up any hopes of black counterplay. In the end, the pawn promotion resulted in a mating attack for white and So was eliminated. 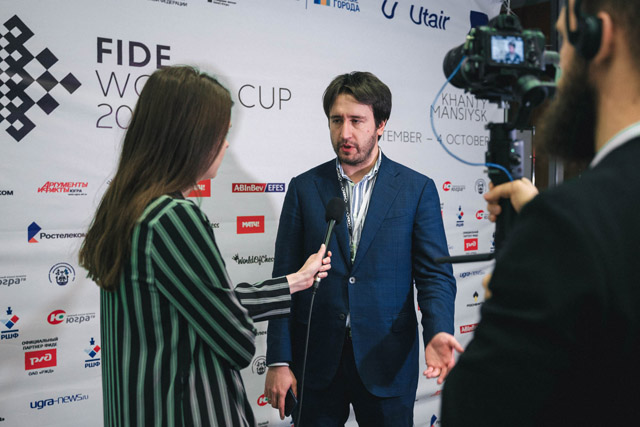 Teimour Radjabov was a projected world championship contender 20 years ago. Will he have another chance in the World Cup? Photo by Kirill Merkuryev

A couple of matches had storylines. Shakhriyar Mamedyarov was playing longtime friend Teimour Radjabov. There is always discomfort in playing someone you know. The first five games were rather uneventful and there was a thought that the two were going easy on each other. In the end someone had to advance. Shakh’s 35.Nxf7!? Kxf7 36.f5.

In the end, white didn’t have enough compensation and his position collapsed rather quickly. With Radjabov not being on the professional circuit these days, this may be his last chance to qualify for the candidates. Mamedyarov will have other opportunities. Yu Yangyi upset Ian Nepomniachtchi with a brilliant queenless attack. Nepo’s bishops were caught offside and white broke through. Maxime Vachier-Lagrave, Levon Aronian and Yu will advance to the final eight.

Charisse Woods off to India for WYCC