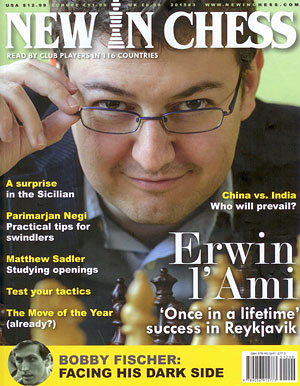 While Bobby Fischer was on the gallant cover of the New in Chess 2015/1 with legendary Miguel Najdorf, this issue was a vituperative denouncement of him. After Fischer passed away in 2009, every chess and non-chess media came forth to psychoanalyze him in a way that was relentless and sometimes fanatical.

Many books have been written with references to his psychological state, albeit most by those who were not trained psychologists. Fischer political views, while unpopular, have been all categorized as abhorrent. It is with this fear that if one accepts some of what he paints as true, it would mean one is accepting his entire worldview. It is a shame, but this is how writers have approached Fischer’s psyche.

In “Bobby Fischer: Facing His Dark Side” the article focuses on the legend primarily after his playing days when he became embittered and used the radio as a vehicle for his vitriolic rants. However, this article focused mostly on Fischer’s frailties and people’s bad experiences with him. Sources and comments (from Judit Polgar no less) were used to pile onto this chess icon who has been deceased for six years. To add insult to injury, the awful photo of Fischer in his unkempt, scraggly beard is presented… just after being released from prison. Certainly, no endearment is shown anywhere in this article.

This article is about Fischer’s dark side and psychological state, but how long are we to recount this aspect of Fischer’s life? He certainly was a man with personal problems, but what is not pointed out in the article was the unfortunate exploitation that he suffered leading him to be so distrustful, bitter… and dark. He was a chess player with personal flaws and no doubt if we probe the lives of many troubled champions and regular chess players, we can find many failed marriages, mental illness, drug abuse, racist comments, sexist comments, adultery and unpopular political views… right among us!

Fischer not being a perfect human being is not a revelation. The best thing about the article was the list of selected books on page 21, games annotated by Fischer and the picture of him visiting Mikhail Tal in the hospital. Otherwise, it was a waste of valuable space in a high-end magazine. There are so many chess stories being missed, particularly in the developing world. To rehash “Fischer’s Demons” once again, well… that horse is dead. 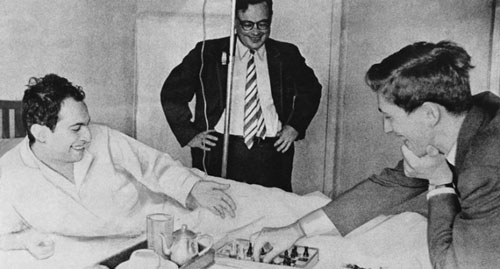 Bobby Fischer visited Mikhail Tal at the hospital during the Curacao Zonal in 1962. Tal retired had to withdraw due to illness while Fischer accused three of Soviet participants of colluding to draw each other and fight him to the death. While his comments were taken to be conspiratorial, they were later admitted by Soviet authorities to be true. When Tal fell ill, Fischer was the only player who visited him. It was said that Tal was deeply touched by this and they enjoyed a cordial relationship throughout their lives.

After Erwin L’Ami’s account of winning the Reykjavik Open (cover story), I was totally flummoxed by a piece on “How the United States Olympic Teams Became International”. What amused me was an opening by Dylan Loeb McClain.

Speculation has been rife that Fabiano Caruana, who has dual Italian and American citizenship, might switch from playing for Italy to representing the United States, particularly in the Olympiad. In recent years, American teams have often relied on immigrants, so a move by Caruana would not be unprecedented.

Here is a 10-year old FM Fabiano Caruana playing at 2003 Foxwoods Open (Connecticut, USA). Now representing Italy, would he be considered an “immigrant” if he switched federation back to the USA? Photo by Daaim Shabazz.

The article does present a very interesting table of teams since 1928 and their composition. Certainly the 90s were the years the U.S. saw a wave of ex-Soviet emigres, but to say the U.S. “relied” on immigrants is a bit presumptuous. There were still strong Grandmasters in the U.S., but of course the breakup of the Soviet Union meant a dispersal of chess talent around the world.

There had been a running joke at the Olympiad tournaments. When asked, “How do you like the Russian team?” the reply was “Which one?” This was a clear reference to the Russians who were heavily represented on the U.S. and Israeli Olympiad teams. Twenty years later, those players have become trainers for the new generation of young American Grandmasters and there is no need to rely on immigration to fuel talent in the U.S. Caruana would just be returning home to join fellow GMs Nakamura, Ray Robson, Sam Shankland, Aleksandr Lenderman, Daniel Naroditsky, Samuel Sevian, Conrad Holt, Kayden Troff, all present/past U.S. Championship participants and raised in American scholastic chess.

There is quite an instructive article by Parimarjan Negi titled, “A Swindler just doesn’t give up”. We all have been in a losing situation. When the dark clouds of our situation hover over the board, we grasp for any sliver of light to turn the tables. Sometimes we pull victory from the jaws of defeat and then other times it’s us who feel the shock of a winning move from the opponent after “having a completely winning position”. This article is a ode to those who are good at generating “cheapo potential” and seemingly rebounding from the most dire positions.

Following up this article was an enchanting piece on what to do when you have decided there are no more swindling chances and you want to resign. How do you do it? Gennadi Sosonko’s “So How Do You Resign?” takes a colorful look at the different ways in which people have resigned from stopping the clock, to bolting the playing hall, to berating the opponent and sweeping the pieces. Of course the quotation below may be advised, but long forgotten.

“On defeat show no signs of anger, or on victory – triumph. In the case of defeat, do not berate yourself, but in a gentlemanly manner acknowledge your opponent’s better play. Do not take deserved laurels away from the victor.”

~The Theory and Practice of The Chess Game, 1890

A couple of interesting notes was Lajos Portisch’s habit of drying his hands under the table in preparation to receive a resignation. Then there is Viktor Korchnoi’s terse comments after losing to a 9-year old boy in a simul, “Your position was completely losing, and in general you play very weakly.” Korchnoi was famous for his terse comments and once asked Mohammed Al-Modiakhi if he understood English. When the Qatari Grandmaster uttered that he did, Korchnoi said, “Then why don’t you resign?”

In my view, the best article in this New in Chess is the account of the China-India match title “Reaching the Summit”. It is a very refreshing and bold article written by one of India’s bright stars, GM Baskaran Adibhan and a rare look at Indian chess players not named Viswanthan Anand. He covered how the match was conceived ironically after Magnus Carlsen had contested the notion that China would be the world’s new power.

“Yes I agree there are a lot of good Chinese players, but personally I think India is the country which is going to rule the chess world!” stated the champion. Not so fast. China just won the World Team Championships and show no signs of slowing with the emergence of a young cadre of players including Wei Yi… and more to come!

Adibhan talks about the shift in the balance of power in chess toward Asia, a topic that has appeared many, many times at The Chess Drum (#1, #2, #3, #4). China won the match, but the spirit shows that Asia has already reshaped the balance of power and with the emergence of technology, knowledge is being transferred at a quicker pace and even players from developing regions in Asia, Africa and Latin America are producing strong talents. 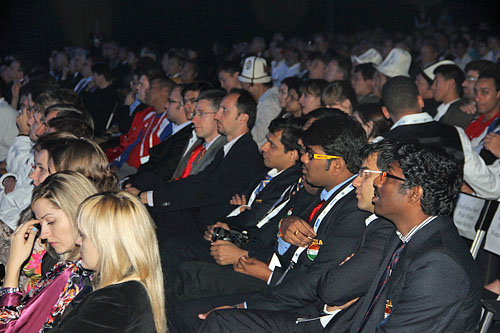 Adibhan Baskiran is at near right with bronze medalists India
the closing ceremonies of Tromso Olympiad.
Photo by Daaim Shabazz.

The Chess Drum interviewed Adibhan after the Tromso Olympiad and he even gave his opinion on the question of balance of power. At that time, he was not convinced that Asia had eclipsed Europe, but in his article, he says,

But I feel now we are slowly beginning to reach our own summit within the international arena, and I will begin to see India mentioned more often, as our aforementioned young talents rise up the rankings. So, a friendly warning to the readers: Here we come! 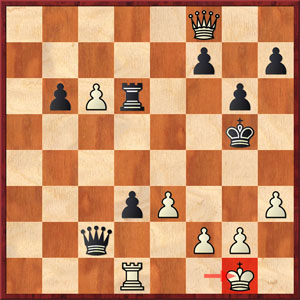 Jan Timman covered “The Move of the Year” which you have to see to believe. Oftentimes there are games that leave an impression on us. I remember a ChessBase article where Nigel Short marched his king from g1 all the way to g5 with plans for Kf6/Kh6 to deliver mate… with the queens on the board! Ironically, that game was against Timman (Tilburg, 1991)! However, Denis Khismatullin’s 44.Kg1!! against Pavel Eljanov was a thing of beauty. It has a similar motif of an attacking king, but the position is on the right if you seek to examine it (see full game).

Finally, Anish Giri made a tribute to the new women’s world champion Mariya Muzychuk who won the crown in Sochi, Russia. He annotated a pivotal game of the match against Natalia Pogonina. Muzychuk will face Hou Yifan in a championship match later this year. The article was on what GMs did in between tournaments and Giri expressed how many options there are to follow chess.