China in the process of crushing the UK in the Liverpool Chess Match.
Photo from liverpoolchessinternational.co.uk.

China has been on the fast track to success over the past two decades. Having boasted held the Women Chess title on four different occasions (Xie Jun – twice, Zhu Chen, Yuhua Xu). They also have current stars in Zhao Xue and 13-year old Hou Yifan. the Chinese women has won five consecutive Olympiad gold medals and have been on a tour competing in various tournaments and matches with their male counterparts.

The Chinese men have improved over the years and are led by Bu Xiangzhi, once the world’s youngest GM. However, he appears as a veteran as others such as GMs Ni Hua, Wang Yue and Wang Hao have joined him. Zhang Pengxiang is the eldest member of the current team at age 27! In recent matches they have beaten a strong Russian team 52.5-47.5 and the UK 28-20. This is after their wonderful success at the 2006 Olympiad in Turin, Italy where they won a silver medal.

The question may be “What is the cause of China’s rapid success?” One may correlate the improvement in chess to China’s own rise as a preeminent economic force. Such has also been said about India. However, there is something else that appears to be helping China to produce a wealth of incredible talent.

There was a book written some time ago titled, “The Chinese School of Chess” by national chess hero Liu Wenzhe. Liu became famous by crushing Jan Hein Donner in the 1978 Olympiad with a queen sacrifice. In this book, he describes in detail the Chinese methods of training and uses instructional games (including the one above) to point out stylistic patterns. 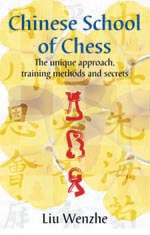 While the book has its shortcomings, it provides a glimpse of the Chinese chess traditions mixed with philosophic principles. This may provide the foundation of training methods used. The Chinese national team live in the same complex and receive intensive training. They are supported by the government where they receive stipends. With their continued success, they have overturned the balance of power in chess with the trend moving toward Asia. By sheer number, both China and India perhaps come to dominate the charts the way Russia did for decades. However, Russia still has strong young talent, but the Russian chess tradition seems to have lost its luster.

We can learn lessons from China’s rise. Perhaps other regions can view China and/or India with a bit of intrigue and attempt to put together programs that will produce and harness talented players. We can see that government support (China) and corporation support (India) are keys to this progression. Will regions like Africa take note? China is making inroads into Africa for economic partnerships. Can something similar happen in chess?