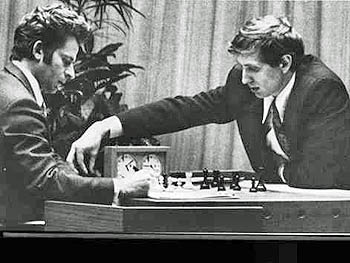 Bobby Fischer (right) on the move against Boris Spassky in their pivotal 1972 match in Reykjavik, Iceland.

The news of Bobby Fischer’s demise has come as somewhat of a shock to the world chess community, but the 64-year old chess legend was said to be ailing. Born as Robert James Fischer on March 9, 1943 in Chicago, Illinois, he primarily grew up in Brooklyn and was raised by his mother and older sister, both to whom he was very close. After falling out of grace with U.S. authorities, he had been a resident in Iceland since 2005 when he was granted Icelandic citizenship. He had been detained in Japan for nine months in what a battered and bruised Fischer stated was a case of human rights violation.

In happier times, Fischer was busy dominating the chess world and first caught the attention of players as a young teen in the famous Manhattan Chess Club. It was there, Washington Square Park and the Marshall Chess Club that he honed his skills into a world-class player. He completely destroyed the American circuit winning the U.S. Championship at age 14.

Fischer made many theoretical contributions to the game, but perhaps his greatest contribution was his notion of playing with unrelenting and uncompromising passion. He had a distaste for draws and played on until the position was lifeless. He is known for the “Game of the Century”… a scintillating queen sacrifice on Donald Byrne. Below is the key position from that game later dubbed, “The Game of the Century” by Hans Kmoch. 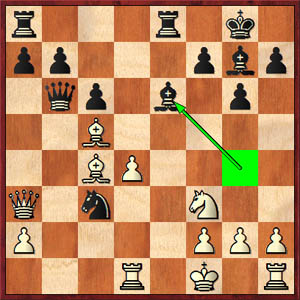 The move 17…Be6!! showed that the young Fischer had a deep understanding of positions, but he was creative enough not to let his technical skill get in the way of his intuition. He had other brilliant ideas as shown by another queen sacrifice. His determined individualism has resonated with a lot of young players today including Hikaru Nakamura who shares many characteristics in common with Fischer.

So obsessed with winning, it was said that he once played another move after the game only had two kings. It may have been an anecdote, but Fischer was certainly an “ultimate fighter.” Fischer was an imposing figure… tall, well-dressed, clean-cut and was famous for his incredible memory. So many stories are told of him being able to recall blitz games move-by-move that had been played many years beforehand.

During his rise to the World Championship, he claimed that the Soviet Union had engaged in collusion during tournaments which included pre-arranging games. While the pre-arrangements are still denied, his accusations of collusion turned out to have a semblance of credibility. Over the years, many players have affirmed the plot to derail Fischer’s quest for chess supremacy. This was not to be as Fischer scored some crushing victories including the famous 6-0 victories over Soviet Union’s Mark Taimanov and Bent Larsen of Denmark.

Nevertheless, Fischer took on the Soviet chess empire and in 1972 faced the indomitable Boris Spassky in Reykjavik, Iceland. This match would become the most famous chess match ever played and was filled with controversy from the start. Only and intervention by Secretary of State Henry Kissinger and the urging by close chess friends averted a forfeit loss. After forfeiting the first game, Fischer demolition of Spassky was so thorough and complete that the world was shocked beyond imagination. Spassky fell into disfavor with the Soviet establishment and later immigrated to France.

The two would then revisit their match twenty years later in a “World Championship Match” staged in Yugoslavia. The country was in the midst of a war and had been placed under sanctions by the U.S. government. Fischer violated the travel ban and was cited. In a press conference he spat on the citation and denounced America and its foreign policies. His relationship with the U.S. deteriorated and he never set foot again on U.S. soil… a man perhaps more adored abroad than in his own country.

Fischer’s victory led to the so-called “Fischer Boom” in America and he was responsible for a spike in chess interest. He also captured the imagination of players around the world. One other fact… Fischer was known as a very keen blitz player racking up ridiculous plus scores in tournaments. He won the 1971 Manhattan blitz tournament by the score of 21½-1½! Larry Parr wrote an interesting article about Bobby Fischer’s skill at blitz chess. The article details many stories about Fischer’s participation in strong blitz tournaments such as the Herceg Novi (Yugoslavia) tournament where he scored a blistering 19 – 3 (+17 -1 =4). How good was his performance?

It had four world champions competing, and Bobby not only finished 4 ½ points ahead of Tal in second place, he also obliterated the Soviet contingent, 8½ – 1½, whitewashing Tal, Tigran Petrosian and Vasily Smyslov, six-zip; breaking even with Viktor Korchnoi; and defeating David Bronstein with a win and draw. According to one report, Fischer spent no more than 2 ½ minutes on any game, thereby also giving, in effect, heavy speed odds to powerful opponents.

After abdicating his crown to Anatoly Karpov in 1975, he distanced himself from chess, but created a new chess variant called “Fischer Random” chess. In this game the pieces are shuffled in the beginning which meant each player could not rely on volumes of analysis that had been prepared beforehand. This was one of the complaints of Fischer’s… the game of chess had been “played out.” Fischer Random chess has indeed caught on, but has not yet developed a mainstream following. One day it will and Fischer will be remembered for its popularity. There had been talk of Fischer Random matches with top players, but they never materialized.

Later in his life Fischer espoused many views besides chess. Hours after the 9/11 attacks, he stated that the United States had “gotten what they deserved” and recounted atrocities such as slavery of Africans and the extermination of the Native Americans as examples. His comments met the ire of the American media and thereafter, the news reports usually focused on his anti-Semetic rants and his non-chess problems.

Even in his death most of the media clips show him in a confused, disheveled state as opposed to his glory years… a dashing figure with a penchant for tailored suits. Many had simply dismissed Fischer as mentally unstable, but of course his comments will be examined very closely in his death. Whether one questioned his mental stability or not, his story is one of intrigue. A story of intrigue… yet one that ended in a pitiful tragedy. Perhaps one tragedy is the U.S. government’s inability to resolve his issues long before he began making inflammatory, disestablishment comments.

Sources say that Fischer succumbed to kidney failure and rejected specific treatments over the past few months. Some may say Fischer died of a broken heart and certainly there were those who took advantage of him. There are perhaps as many opinions of Fischer as there are chess players on the planet. However, no player has ever denied Bobby Fischer’s important contributions to the sport… in a day before computers and databases. He will go down as one of the legendary figures in all of chess.

Footage of Bobby Fischer during his match with Boris Spassky in Reyjavik, Iceland. Fischer would destroy Spassky 12½-8½ to become the World Champion.