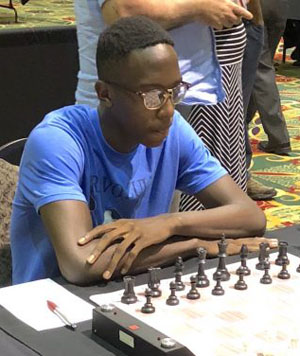 Zahir Muhammad, 17, has a vision. It is a vision that is often stated by many in the Black community. Muhammad is a slender 6’3″ and has the frame of a point guard, and while he does indeed play basketball as well as track, chess has become his focus. Zahir was taught chess at the age of three by his father, Rory Muhammad who instilled the virtues of the game. Currently a Class-A player and two-time Denker qualifier, Muhammad has recently launched an organization designed to bring chess to the underserved community. Full Circle Chess seeks to change the perception of chess as a more inclusive activity.

Interestingly, his mission has in part been motivated by racist incidents.

“In middle school, I was on an all-black chess team and everywhere we went, people were looking at us differently and they were looking like – what are they doing here? Why are they here?” Muhammad described. “We even had to go against people making monkey noises and things like that because we were defeating stereotypes. The way that we responded was playing well on the chess board and winning championships.”

Zahir was involved with the Bravo Zulu Chess Club, a district-based non-profit training academy for chess development. The club comprises of a number of players from different school and they compete in area tournaments. One event in which they have shined is the “Bum Rush the Boards” Hip-Hop Chess Tournament organized by Words, Beats & Life (WBL).

“I tell all my kids, ‘Use your brain, it will last longer.’”

DC is well-known for its iconic Dupont Circle, a famous watering hole for chess. Many organizations such as WBL and the DC Chess Center attempt to serve the greater DC area, but Zahir has a goal to widen the outreach with his new initiative.

Full Circle Chess will provide a service where others like James “Black Knight” Taylor and Eugene Brown’s “Big Chair Chess House have tried before. The latter organization was the subject of the movie, “Life of a King” starring Cuba Gooding.

Last year Zahir was honored by the DC City Council as a community leader and also chosen by DC Council Member Anita Bonds as ‘Community Cornerstone Award’ recipient. In the past, he has given demos in the DC area and recently announced a collaboration with Howard University.

Zahir has a desire to attend an HBCU and hopefully Howard, FAMU, North Carolina A&T and Morehouse are listening!