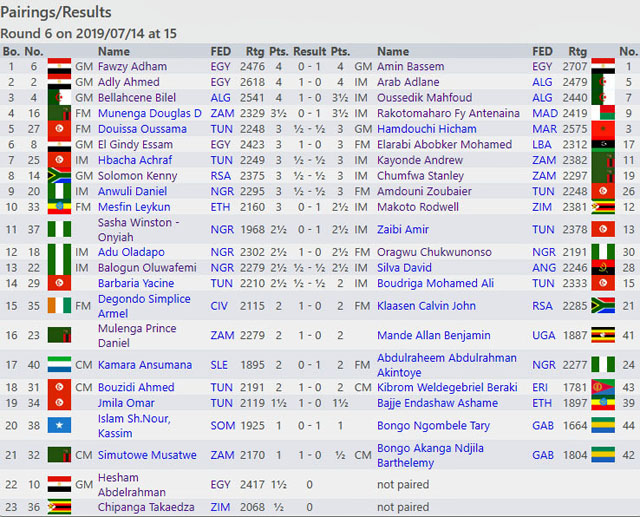 Another exciting round of chess. Three of the top seeds are back on course and are sitting atop the field with 5/6. The situation may favor Ahmed Adly since he has already played three of the top seeds. He plays Adham Fawzy tomorrow. Neither Bassem Amin nor Bilel Bellahcene have played Hicham Hamdouchi. Amin plays Essam El-Gindy tomorrow while Bellahcene will play the undefeated Fy Rakotomaharo.

In today’s games, Amin totally destroyed Fawzy who must’ve woken up this morning from a bad dream. With the white pieces, Fawzy essayed the Scotch Gambit and unknowingly went into a line where black has a huge plus score. It is surprising that the young GM would play this line against someone of Amin’s caliber. The lines are too concrete and black is generally able to equalize… if he can avoid traps. This game was a complete disaster for Fawzy and by move 15, he was strategically busted.

Adly got back on the winning track with a win over Adlane Arab and his attempt to avoid the “Killer Catalan” with 5…b5!? This move is actually being tested at top level by none other than Viswanathan Anand, Evgeny Alekseev, and Jan-Krzysztof Duda. The line turned out to be very complicated and Adly showed better preparation and got a lasting advantage even with the queens off. The end of the game is instructive and proves that even with completely equal material, there is something to play for.

Bellahcene, who was raised in France, has to be quite prepared to face Mahfoud Oussedik’s Najdorf, the main weapon of French player Maxime Vachier-Lagrave. Certainly there is a lot of discussion in Najdorf circles about ways to upset the dynamic defense. 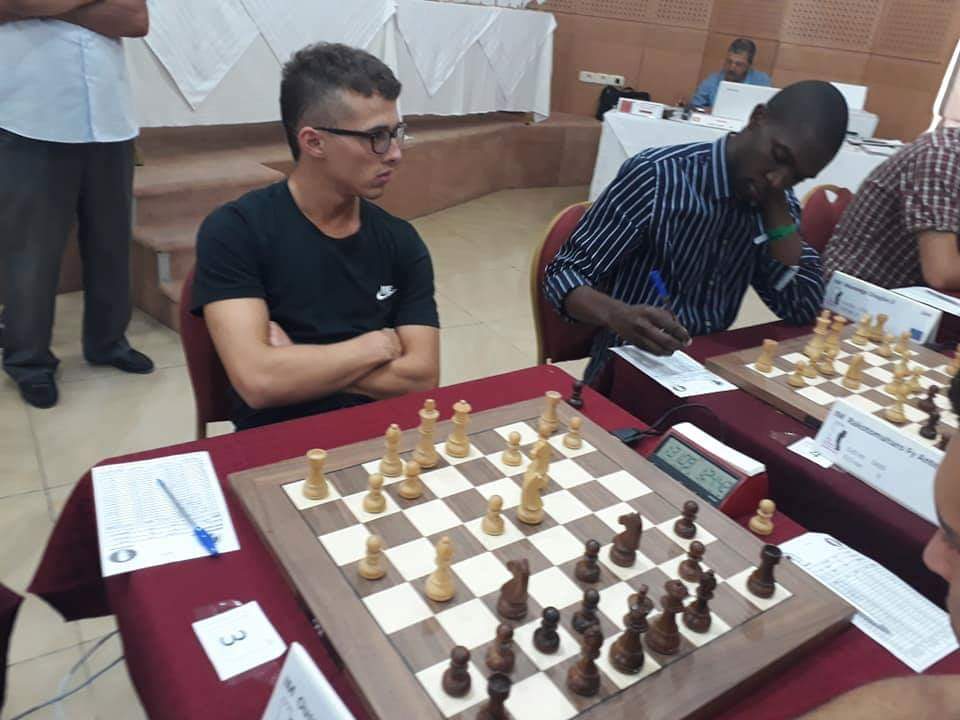 This game was a classical opposite wing battle and lived up to its billing. Without much help the white queen invaded black’s position and wreaked havoc after 27.Qh8+ Bf8 28.Qg8 Bb5 29.c3 Nb6 30.Qe6+ Kd8 31.Qxe5! The game was a clinic on how to catch an opponent flat-footed in preparation. Wonderful game by Bellahcene!

Lastly, there were two similar endings in both sections today. In Miladi-Moaataz and Munenga-Rakotomaharo, there were rook endings with a- and h- pawns remaining for one side. As we segway to the women’s section, let’s look at the positions and see how they evolved. 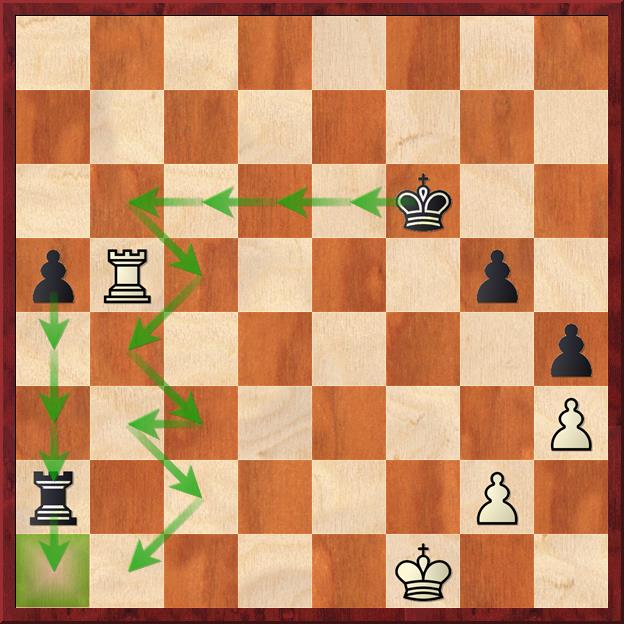 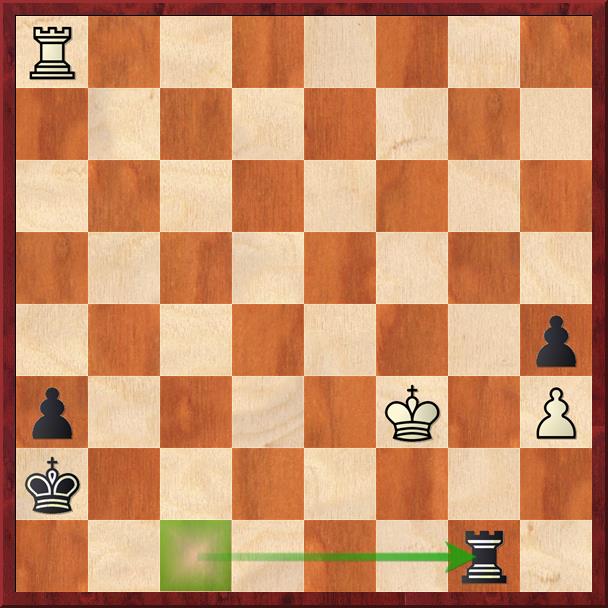 In the position above, black has to run his king over toward the rook to break the barrier and walk up the board to support the pawn while the rook helps to stop the enemy’s pawns. It is a common theme in rook endings. The rook can sometimes stop up to three pawns if the king is close enough.

This position was very instructive because of the frequency in which rook endings occur and Rakotomaharo showed enough patience to prevent counterplay. The 20-year old IM remains undefeated, but will have a stiff test against Bellahcene tomorrow. He certainly has GM norm aspirations and of course, if he wins the tournament he will get the GM title outright. The Malagasy player won the 4.3 zonal with 8/9 so he is in excellent form.

There were a good number of draws in today’s action. Since there are no rest days, it may be no wonder that fatigue may become a factor. The tournament standings are so critical that blunders as a result of fatigue can change the fortune of the tournament quickly. There were six draws from 21 games. We can expect more in the rounds to come as players become more cautious about their position and title chances. 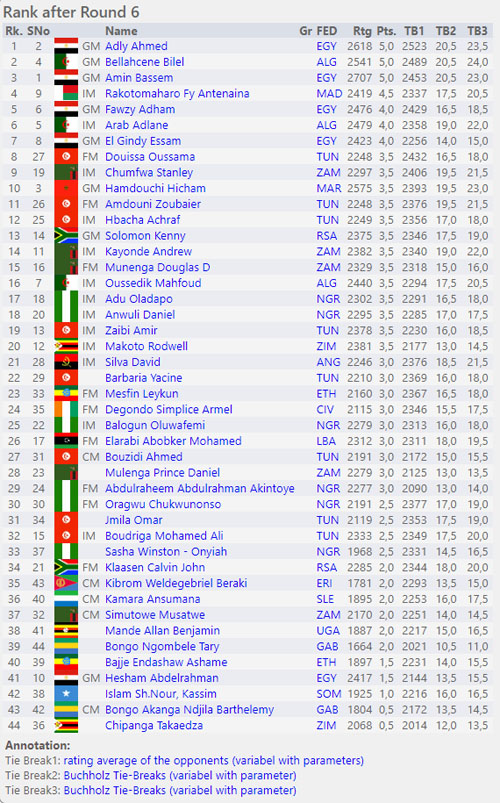 Top Pairings for Round #7

Back to business. Eleven games played. Eleven games decisive. The bad news is that Shahenda Wafa is all but eliminated from defending her title successfully, but her sister can be an able successor. Shrook Wafa played another sparkling game against Nigeria’s Toritsemuwa Ofowina. The 18.Rxd7! shot was the finsher on 23.Nd7+ black resigned. 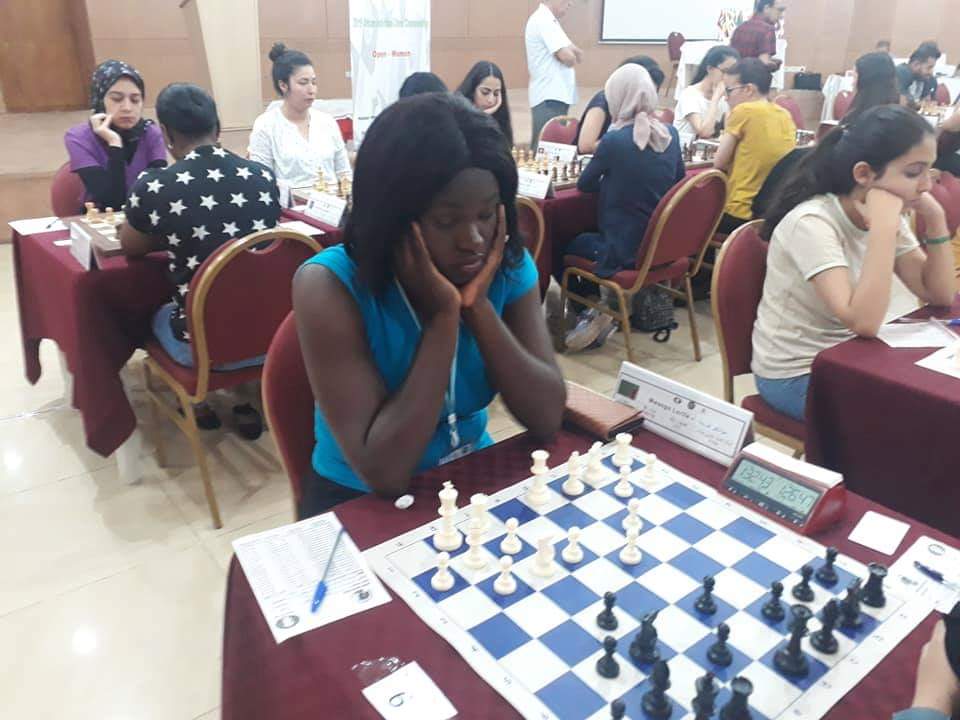 Sabrina Letreche has rebounded after being beaten badly by Wafa on board 1. Not often you get to see mate on the board but this game was decided when Sabine Ravelomanana had an oversight and lost a piece on move 12. There were some tactics in the middlegame and black ended up with three pawns for the piece, but they were trebled on the c-file. Letreche attacked the queenside pawns directly and begin to pick them off. Despite being a piece down, there are still chances to liquidate all pawns and begin counting. Before that happened the Ravelomanana walked into mate.

Miladi-Moaataz had an encounter that ended with an instructive ending. As mentioned earlier Munenga-Rakotomaharo had a similar ending. This was a game to watch because white had more space the entire game before overextending her position. Suddenly, she ended up two pawns down and the Egyptian converted the win comfortably. Ending with a- and h- pawns are hard to defend against with any piece because it is hard to contain them both.

There should be some discussion about the inclusion of a rest day for this tournament in the future. Some of the games in round six were not competitive. The original schedule had a free day for Saturday, but apparently the change in venue required a change in the schedule. It’s unfortunate because this tournament will be very close in the end. The open section will be especially tense the last three rounds. 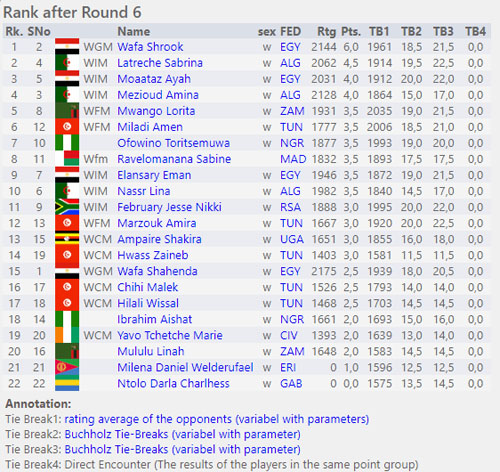 Top Pairings for Round #7