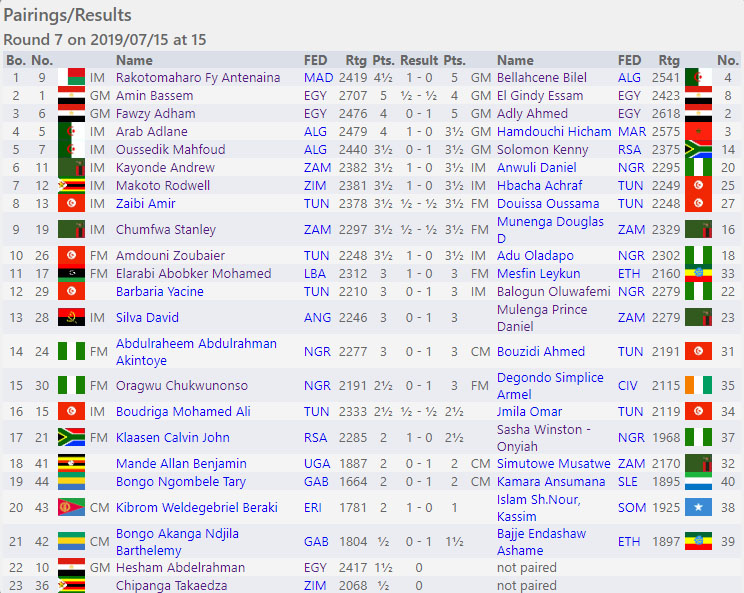 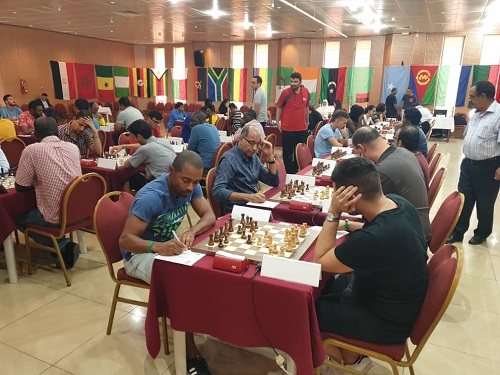 There is no odds-on favorite to win the 2019 edition of the African Individual Championship. The story of the day has to be the young IM from Madagascar Fy Rakotomaharo who stands as one of two undefeated players in the field. In his game today against Bilel Bellahcene, they entered a theoretical Queen’s Gambit line that has been tested thoroughly at the elite level.

This game was a tense battle even following Reshevsky-Ragozin, 1937 for 13 moves. That game was drawn. This game was also level after twenty moves, and almost symmetrical. Then the fight began. Bellahcene uncorked the shot 30…Nxe4 which looks good, but misses a detail after 31.Nxc4 Nxf2 32.Qd6!

After that white was slightly on top. Black’s pawn structure was in shambles and ripe for the picking. However, in severe time pressure Bellahcene played 38…Nd5?? with one minute on the clock and one move to get another 30 minutes. It was not to be. After 39.Nxd5 exd5 white has 40.Rxd4! when the white pawns will promote. Very intense!

Ahmed Adly had won his second game since losing to top-seed Bassem Amin. He stands on 6/7. Incidentally, Amin was held today by Essam El-Gindy who started slow with 1/3, but now is on a run of 3.5/4. Perhaps his beautiful African shirts are the reasons for his rejuvenation! He split the point rather quickly today in a theoretical Sicilian Rossolimo, most of which had been played before! After 18 moves, they shook hands, and it amounted to a rest day for both players.

Adham Fawzy was hoping for a better showing against Ahmed Adly today, but he was outplayed once again. This game was another Sicilian which left theory fairly early and while the game was dynamically balanced, black had more activity. Adly kept probing and white’s position became a bit disjointed defending so many weaknesses.

Then came 42…Rxb2! and white had no choice but to donate the queen to avoid 43…Rdd2 and being squeezed. After getting three pieces for the queen, white had problems with coordination due to the passed pawns and exposed king. This makes it easier for the fleet-footed queen to pick off material. Ultimately, Adly’s pawns were steamrolling up the board and Fawzy resigned.

Hicham Hamdouchi is a Moroccan and African legend. If he never played another game, his legacy is safe. He may still have a few wins in him, but today would not be that day. In his game against Adlane Arab, he played an ambitious opening with 6…f6 7.Bh4 g5 8. Bg3.

After ten moves, his king had no shelter to speak of. Arab exploited this by sacrificing a pawn to expose the king even more. The Moroccan tried to simplify the position to reduce pressure on his king, but then fell into a petite combinaison losing immediately. Arab seems certain to get a GM norm. 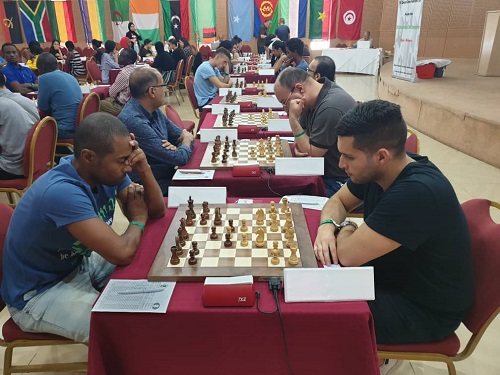 South Africa’s Kenny Solomon, who is based in Italy, is the only other player with an undefeated mark after seven rounds. Employing the Old Indian Defense, the game was a strategic struggle before Mahfoud Oussedik sacrificed a critical pawn for no apparent compensation. The South African plowed in and got his first win since the opening round.

In other action, Zoubaier Amdouni continues his solid result with a win over Nigeria’s Oladapu Adu. With a 2400 performance, he is the leading scorer for the host Tunisians losing only to Bellahcene. Zambia’s Andrew Kayonde and Zimbabwe’s Rodwell Makoto have climbed back to the upper half of the table.

The Nigerians have fallen off the pace after hopes to make an impression in the tournament. Femi Balogun is the leading scorer on +1 while Adu and Daniel Anwuli are both at 50%. We haven’t heard much from the Libyan player Abobker Mohamed Elarabi, but he has put together a solid tournament losing only to Egyptians Adly and El-Gindy. 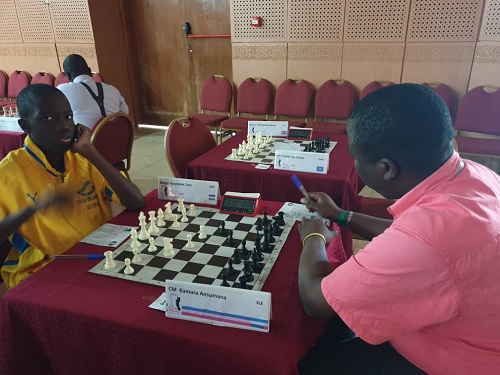 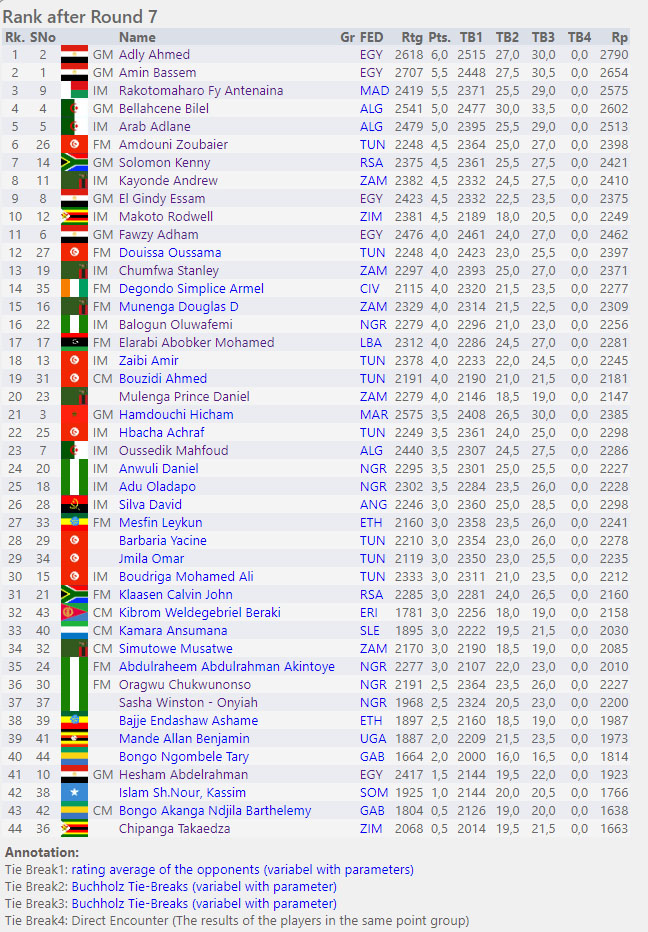 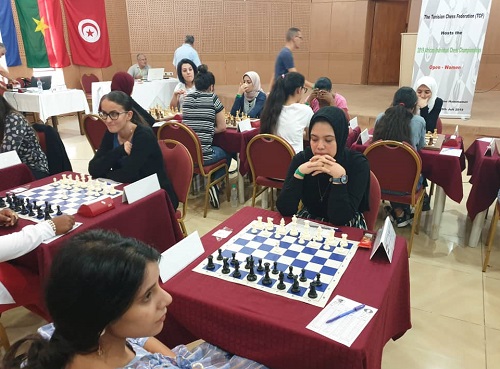 Anticipation of the start of the 7th round! 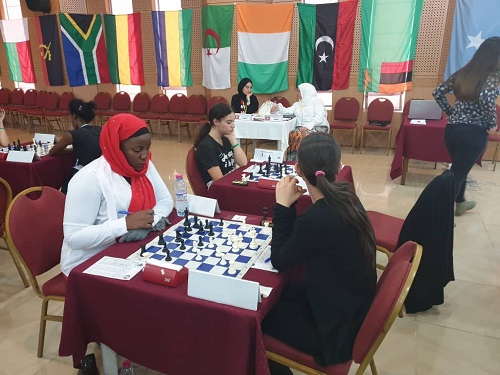 Shrook Wafa was looking for a clean sheet in this tournament, but her run was stopped as Amina Mezioud held her despite a two-pawn deficit. As good as Wafa has been in this tournament, she is only one point ahead of the field as Letreche kept within arm’s distance with a convincing win against Ayah Moaataz.

The question now seems to be the order of the medals as there are three players (Amina Mezioud, Eman Elansary and Lina Nassr) with 4.5/7 competing for the silver and bronze medals. There are also five players on +1 who still have a reasonable chance for the bronze. 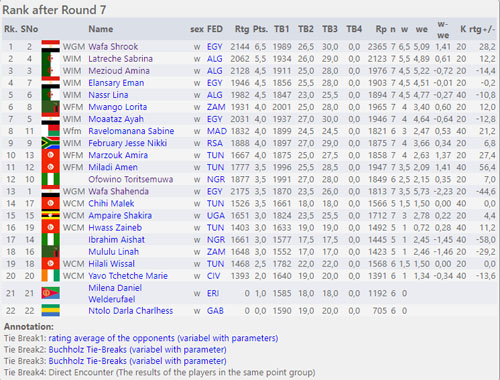