Twenty-year old Aleksandra Goryachkina won the Women’s Candidates tournament with a dominating performance and finally bringing to fruition her prodigious world championship potential. Since coming on the scene as a young prodigy she has turned in stellar performances winning three age world titles and the Girls World Junior in 2013 and 2014. She joined the national team in a reserve role in the 2013 European Team helping Russian win a silver medal.

Three years later she was double gold (team and individual) at the 2018 European Team and became a Grandmaster the same year after earning the required three norms. She got her first appearance on the 2016 Olympiad team in Baku, Azerbaijan and score 50% before a strong performance in Batumi, Georgia with 6.5/9. She has been fancied as the future of Russian women’s chess as her teammates make way for a new generation.

Her ascendancy may invoke memories of Alexandra Kosteniuk who played against Zhu Chen for the women’s championship as a 17-year old. She lost this battle, but would win the title in 2008. Goryachkina has a similar story line and seems to be Russia’s next hope to reclaim the highest in a world of increasing parity. 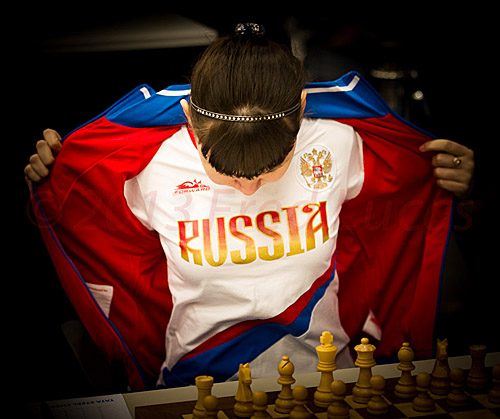 Russia’s future has arrived with Goryachkina.
Photo by Fred Lucas

In the recently-ended Candidate’s she dominated a veteran field and clinched the berth with two rounds remaining. She will be the second Russian to play for the title as Kateryna Lagno lost the title bout last year against Ju. Goryachkina will try to bring the title back to Russia after 11 years. The match will take place later in the year and will mark the first championship after returning to the match format.