Lewis Ncube, the incumbent, declared to hold his position as President of the African Chess Conferation after two competitors emerged. It appeared that he would have quite a challenge after Tshepo Sitale and Dr. Essoh Essis released very impressive campaign statements. There was also the debate hosted by African Chess Media that gave more insight as to the candidates’ suitability.

The challenge for incumbents is that there is always a question of what they had accomplished in the previous term. For the others, they can build a sense of optimistic vision and their own track records (which they present). Ncube has been a survivor having been a FIDE Vice President, he was maligned by Georgios Makropoulos concerning a US$30,000 account. Ncube told The Chess Drum that this matter was settled and he had long paid back the loan. This issue had a chance of creating a cloud over his campaign, but he was able to state his case.

In a turn of events. Sitale withdrew from the campaign and lent his support to Dr. Essis. This was a tactic used by Nigel Short to help unseat Makropoulos in favor of Arkady Dvorkovich. However, the combined tickets were not sufficient to unseat Ncube and he won the vote 23-21. 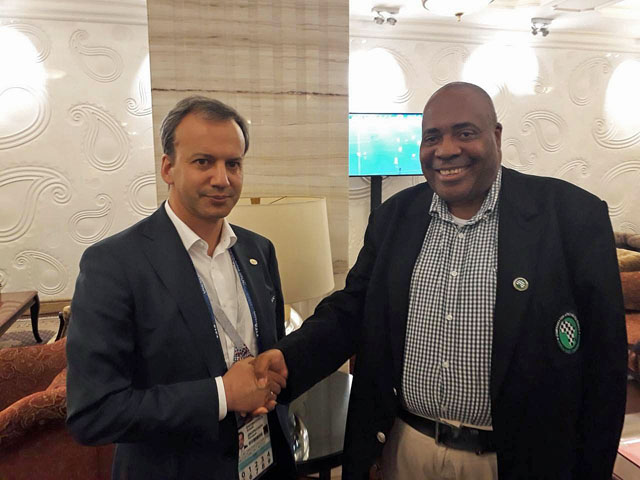 With an impressive 47 African Federations on the books, what’s next? Will we finally see sustainable chess development in Africa after FIDE has long neglected the region? With Dvorkovich at the helm, he has promised many ideas favorable to the continent. He also made a very important admission.

Africa has never organised a Chess Olympiad. The last time the Olympiad was in the Americas was 40 years ago. The last time in Asia was 26 years ago. Could you imagine FIFA holding its World Cup in Europe only? That would be ridiculous.

Perhaps we will see a new system of Olympiad bidding. Since 1992, all Olympiad have been held in the general European region. Will we soon see an African host? Perhaps, but what is more important is to build a plan that will result in long-standing programs and not merely one-shot tournaments that lasts a few years. With Dvorkovich’s support of Ncube and his initiatives, we can only hope that there will be some progress made in Africa in the next four years. Ncube will have to carry this vision forward.

African Diaspora made a colorful presence in Batumi