In a first result of its kind, the 2018 Sinquefield Cup ends in a tie… a three-way tie at that. Fabiano Caruana had led the tournament for several rounds, but was caught at the finish line by Levon Aronian and Magnus Carlsen who both won their games in thrilling fashion. All three ended with 5½/9.

The tournament had a bunch of twists and turns and with the “Confession Booth” there were some light moments. In the 7th round, Carlsen and Caruana battled and the American seemed to be holding, but the champion was confident that he broke the resistance. He went to the “confession booth” and made this brilliant statement!

.@MagnusCarlsen in the confession booth ????. What do you think it means?! pic.twitter.com/KBOoAHhcPD

Gesturing of the “silencer” is a very common gesture by NBA players when they hit a winning shot to silence a home crowd. Kobe Bryant is perhaps the most famous NBA practitioner. It is well-known that Carlsen is a big NBA fan and has been seen courtside at games. Unfortunately, for Carlsen, Caruana held the position. In the post-game interview, he laughed and admitted that the optimism had backfired.

Many of the observers were making a big deal about the importance of this matchup given that it is the last game they will play before their November match. In the pre-tournament press conference, there was a bit of banter between Carlsen and Caruana, but mostly there has not been much media buzz about the match which is only two months away. This was a good start to the pre-match buildup.

However, Grischuk had an interesting take on Carlsen’s gesture! 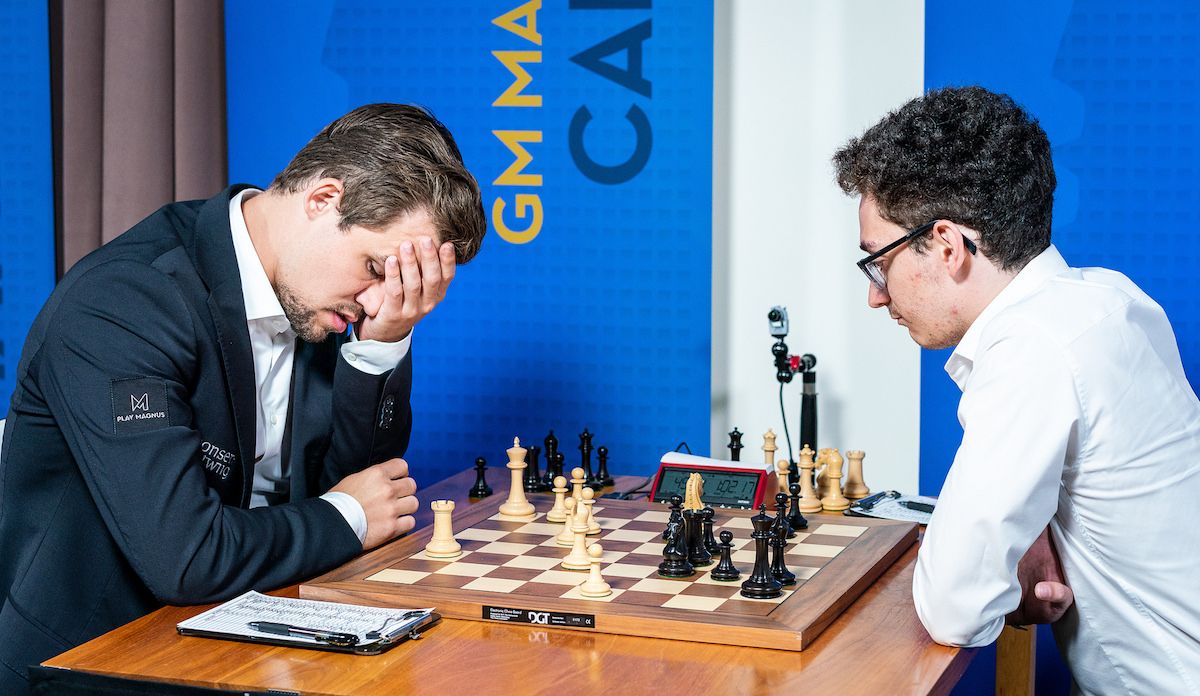 Carlsen flustered after having missed a big opportunity to score the win.
Photo by Lennart Ootes 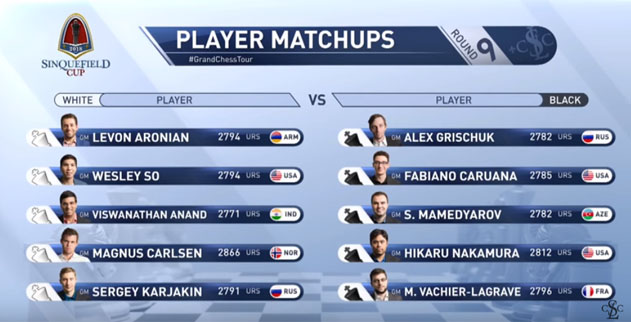 Levon Aronian won his final game in style with a 18.Rxf7! rook sacrifice with Alexander Grischuk in zeitnot. In the video broadcast, the Russian jostled in his chair looking for a response with his clock ticking down. Under the mounting pressure, he collapsed. Further analysis showed that he could’ve held the position, but even with time on the clock it would have been a difficult task.

Levon Aronian's inspired rook sacrifice on f7 underscores how difficult it is to defend flawlessly when under pressure. https://t.co/Ka5QSpwsL9 pic.twitter.com/7O7Z2ruW1l

In the Carlsen game against nemesis Hikaru Nakamura, the two battled into the 11th hour as the Norwegian was still fighting for 1st place. Nakamura had already cemented his Grand Tour victory, but wanted to end on a solid note. This battle would go on 97 moves. 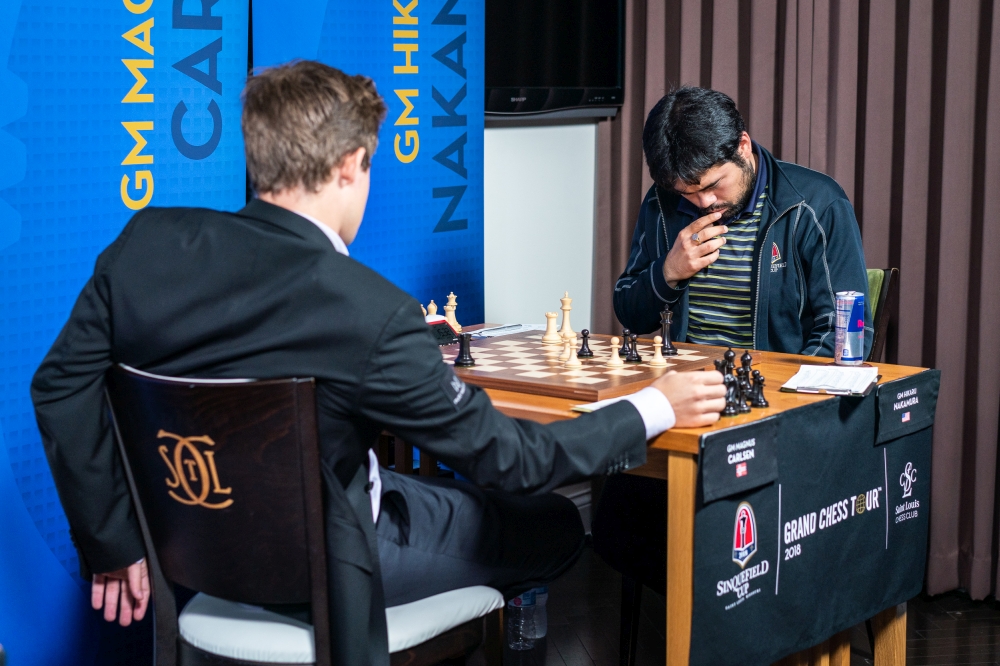 A number of viewers pointed out that this classic 4 vs. 3 position had been played several times including in Grzegorz Gajewski – Maxime Vachier-Lagrave. Incidentally, Gajewski was in St. Louis as Viswanathan Anand’s second. It also appeared in Eltaj Safarli – Ilija Golichenko. It is one of those positions found in problem books, but of course each scenario is different.

Neither MVL, nor Golichenko could hold. The same fate fell onto Nakamura.

Nakamura extends his hand in resignation to Carlsen.
Tough loss in a salvagable position.
Photo by Lennart Ootes

With wins by Carlsen and Aronian, there emerged a three-way tie for first. While Caruana had drawn quickly and was not on site, the two other co-leaders had a conference with the Chris Bird and the three players agreed that instead of the playoff, they would simply share the title.

In fact Caruana, had to play a playoff against Wesley So to see who would qualify in the Grand Chess Tour standings to complete in the London Classic final. It was unlikely that Caruana would have wanted to play two playoffs in a day. So it was… 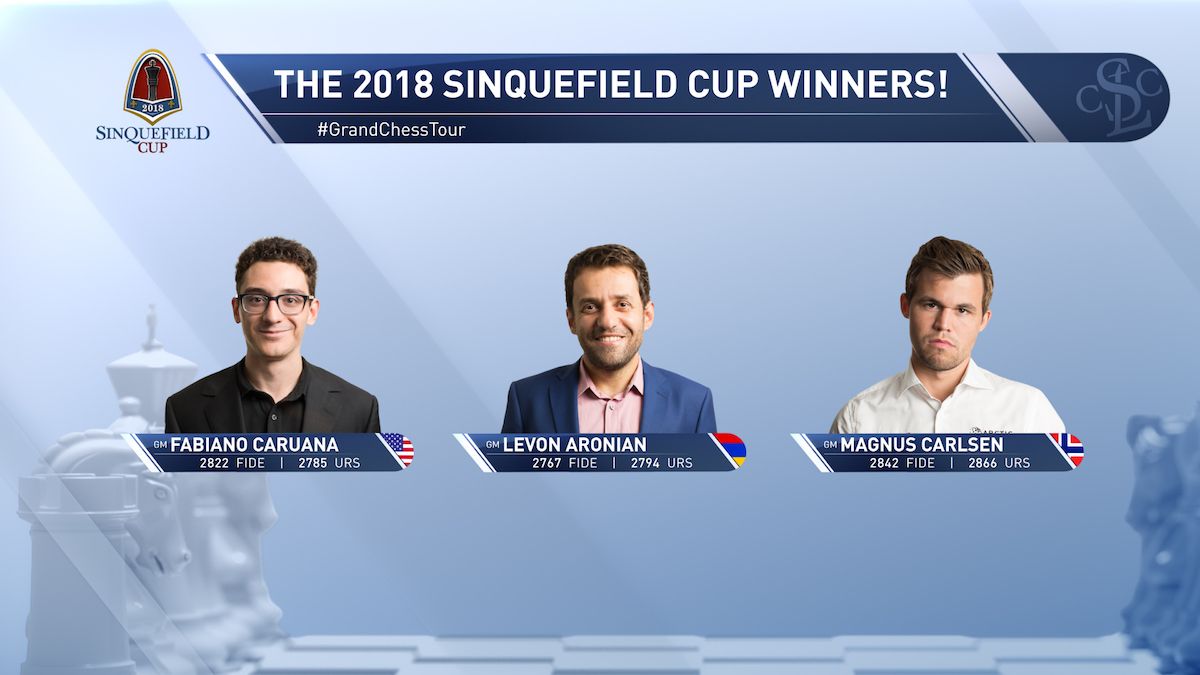 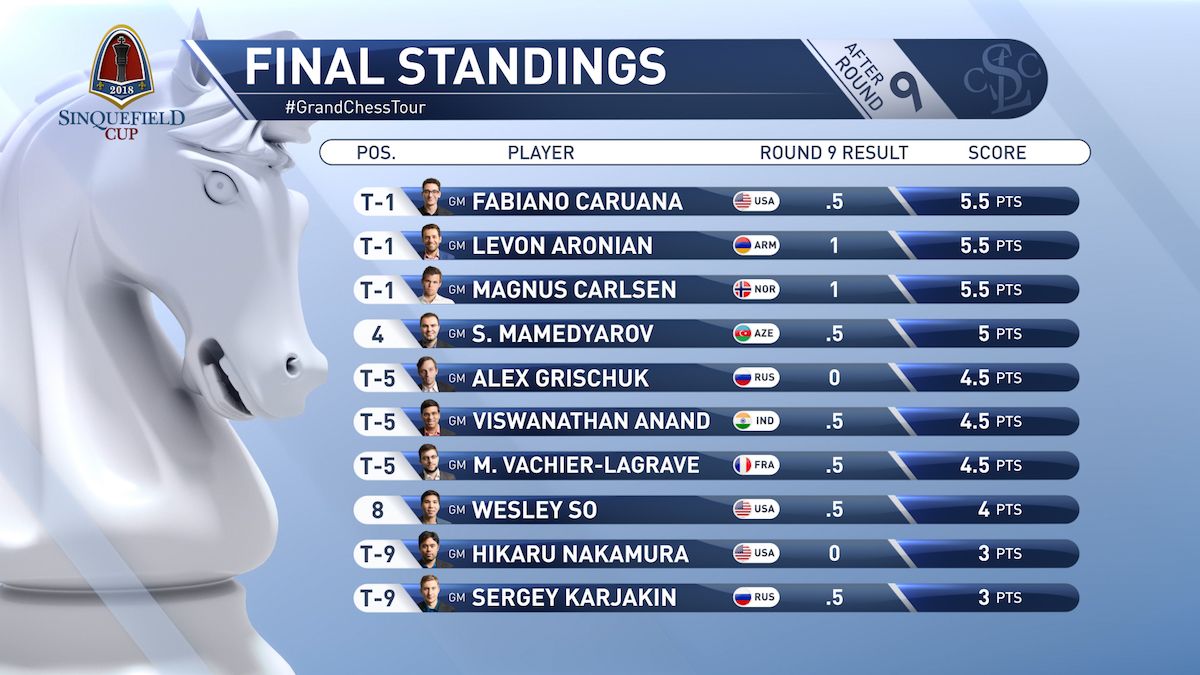 There were some interesting points in the tournament such as Carlsen’s Benko Gambit with …Bf5, Grischuk’s 1.f4, Aronian’s Rxf7, but there was one move that produced howls and whistles. Perhaps if the sound of gold coins could be made, we would have gotten a good shower. The game… the second playoff game of Caruana-So.

The next day Fabiano Caruana and Wesley So were poised to play two rapid games. The first two games would be 25 minutes with a 10 second delay. If tied the games would go to 5 minutes and 3 second delay for three iterations until a winner was determined. There has been a very interesting discussion on the delay vs. increment. The delay is less common, but it was noted that the Grandmasters had figured out how to milk the delay all the way down to the 9th second to avoid losing time. 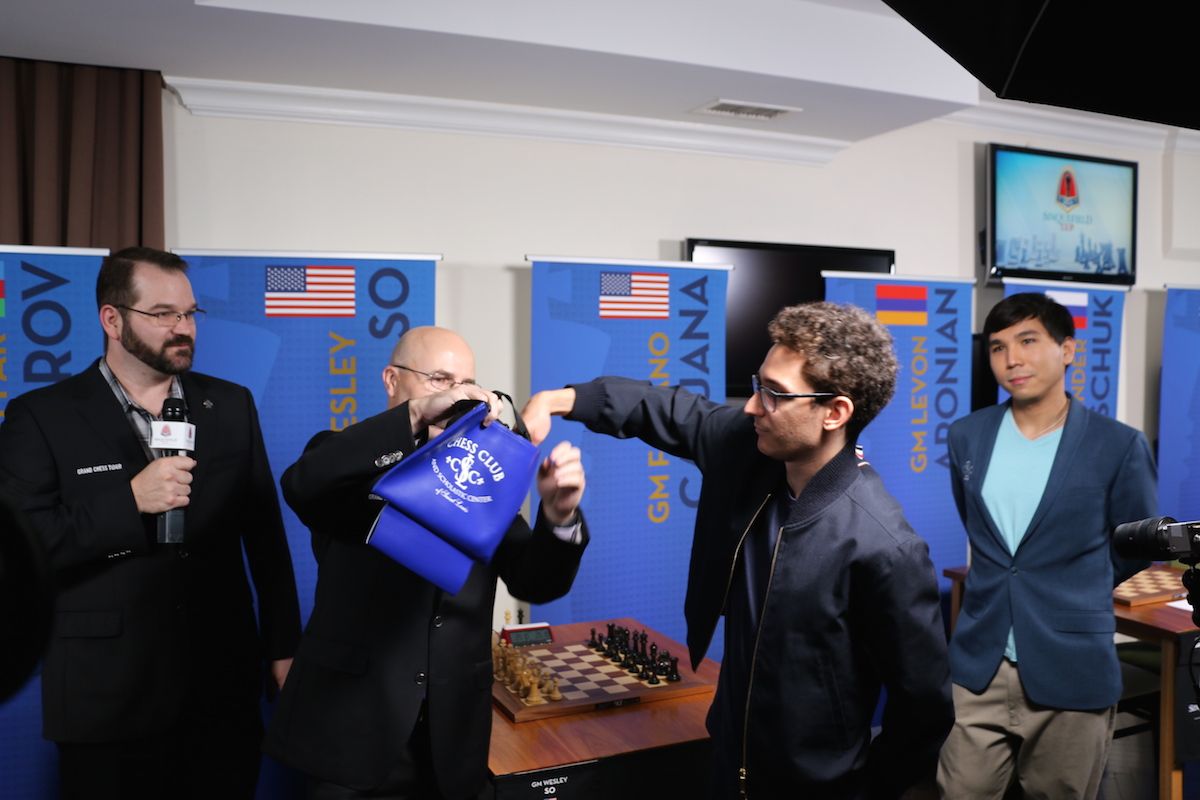 The first game was relatively quiet Catalan and a rather peaceful handshake occurred after 33 moves. The second rapid game was also a Catalan and started out in similar fashion but quickly veered into murky waters after 15…f5?! This was criticized as “weakening” and soon white had a humongous space advantage.

With black trying to clamp down the dark squares, Maurice Ashley mentioned that the engine was suggesting a very peculiar move. He also reflected on going over games and seeing moves that seemed antithetical only to find (upon further) examination the deadly intent. So what was the move that created a shower of golden coins?

The thematic 26.Ra2!! Gold coins indeed and Caruana went on to win with class. He was very humble in his remarks and didn’t seem to realize the excitement he caused. So the championship challenger will have an extended stay in London after his match! 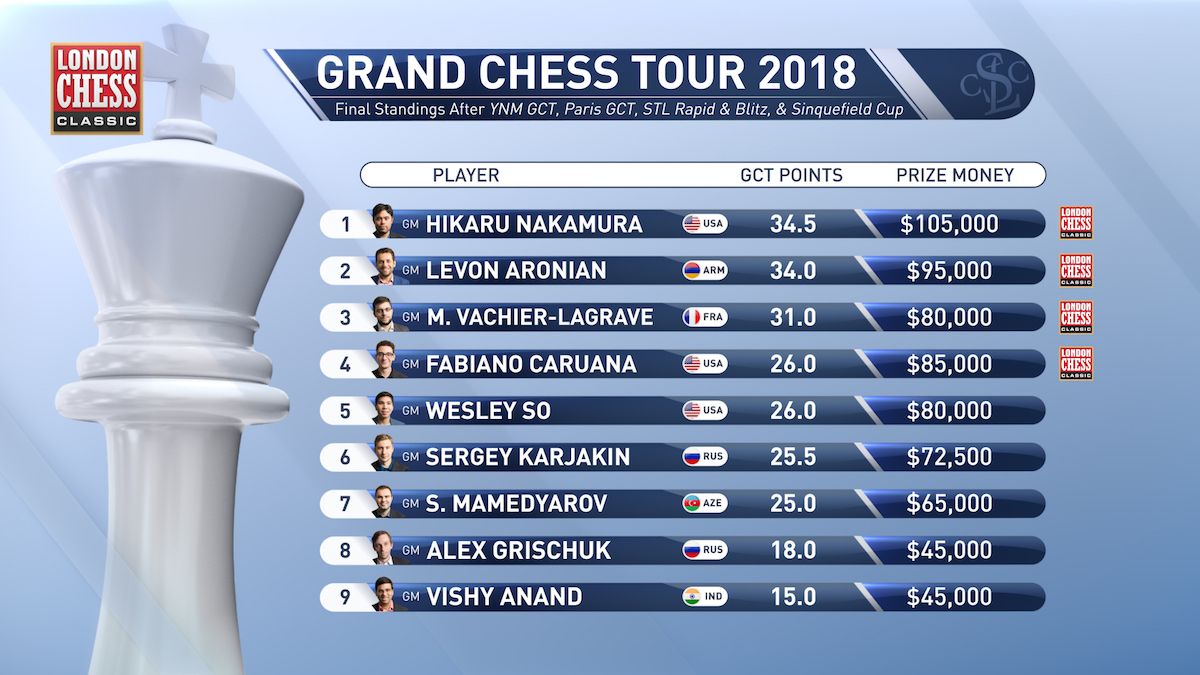