With the Chess Olympiad and the World Championship coming up this fall, the Sinquefield Cup will round out the summer’s last Grand Tour event before the London Chess Classic in December. The London event will follow the Championship which is also held in London and will feature two of the GCT participants, World Champion Magnus Carlsen and Challenger Fabiano Caruana. Carlsen will not participate in the Classic, but will certainly be ready to try to win his second Sinquefield Cup. In fact, Carlsen tweeted his inspiration.

The 2018 Sinquefield Cup is not very different from last year’s edition with the exception of Alexander Grishcuk’s return (from 2015) and the hottest player in the past year Shakriyar Mamedyarov replacing Russians Ian Nepomniachtchi and Peter Svidler.

In addition, the previous four GCT tournament (this included) will serve as qualification events for the finale which will be held in London. The format has been tweaked over time and this year means that players have to fight more vigorously to compete for a lion’s share of the prize money.

The Sinquefield Cup sees Magnus Carlsen and 9 more of the world’s best players compete in the Saint Louis Chess Club from 18-27 August 2018. The event is the last leg of the 2018 Grand Chess Tour before the final in London, with Carlsen joining the tour regulars as a wild card. In addition to tour points the prize fund is $300,000, with $75,000 for 1st place. 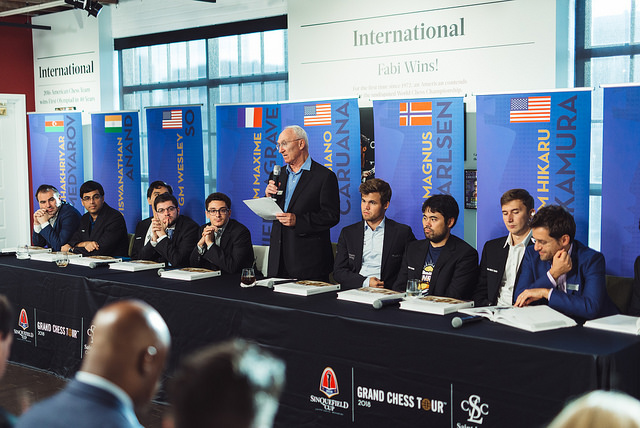 This is the 6th edition of the Sinquefield Cup and since it’s start as a four-player tournament has blossomed into a round robin format that includes 10 players. Mamedyarov has vaulted over the 2800-level to join Carlsen and Caruana while the other players have essentially shuffled positions. The same core of players are participating this year with the return of Carlsen. This will be a tuneup for the pending match as he will not compete in the Olympiad.

For more information, visit www.grandchesstour.com or follow along at @CCSCSL.