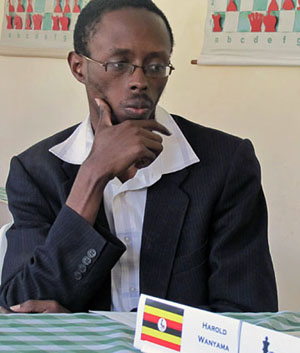 In a story out of Uganda, FM Harold Wanyama has retired from competitive chess after a 10-year stint that included appearances on the Olympiad team, national tournament prominence and stellar play in the club leagues. He mentioned as part of his highlights his experience in the Istanbul and Baku Olympiads and also the 2015 Millionaire Chess Open in Las Vegas. He won the Millionaire qualifier in Kenya and earned an all-expense paid trip where he described his experiences in an interview with The Chess Drum. 15:03 minutes

His retirement comes two days after a 7th place finish at the Kireka Open. In the article in Kawowo Sports, Wanyama stated that he wants to spend more time building his professional career in Information Technology and with his family.

One of East Africa’s greatest chess players ever has called it a day in office after a phenomenal career.

Wanyama who will go down as one of the finest players to ever take to the board quit the brainy game two days after the inaugural Kireka Chess Club Open Chess Championship held at Memorito Hotel, Bweyogere.

“It is time to call it a day in chess,” Wanyama, a three time Olympian revealed to Kawowo Sports.

“The journey has been intriguing and I’ve loved representing the nation from 2006 to date.

“I’d like to thank Dr Zirembuzi for giving me a chance to improve with Mulago Chess Franchise. I have basically won most of the events in a ten year span.

“A highlight of my journey was the Istanbul experience in 2012 where I gained the most rating points amongst all participating players from over 130 countries.

“The other highlight was recently in Baku this year where I was among the best performing Players on board two ahead of players like Nakamura, the world’s number three.

“I was also blessed to be among the three African players who were sponsored to go to Las Vegas in 2015 where I got great exposure.

“Now the journey has come to an end and I have to call it quits as I have to put more focus on my IT profession and family. I shall be following events as they happen though so I will not be so far away.”

In his ten-year career, Wanyama who played for seven clubs including Mulago Knights, Mulago Kings, Makerere, Sanlam, Makindye, DMARK and Kireka won over ten events with a number of those being shared between Uganda and Kenya.

He became the first and only player to defend the East African Championship when he retained it in 2007.

He also became the only player to win the Rwabushenyi Memorial Open three times when he took home the 2015 edition.

While his retirement comes at a time he’d lost his mojo following his unsatisfactory displays at the Kireka Open and the recently concluded Equity Open in Kenya where he finished fifth, 2016 will go down as one of his best years.

Aside from his superlative performances at the World Chess Olympiad in Baku, Azerbaijan three months ago, the FM produced equally outstanding performances at other events.

In May at the Zone 4.2 Individual Chess Championships Open in Dar es Salaam, Wanyama earned his IM norm after collecting six points to finish third, only behind Egyptians Sobr Amrou and Kandil Adham– who won the tourney with seven points.

That was after he’d won the Kawuma Open in March ahead of International Masters Arthur Ssegwanyi and Elijah Emojong and FM Patrick Kawuma.

He was joint top with Emojong at the Mombasa Open last month after both attaining 6,5 points. He only lost the title on a tie-break.

On a club level, 2016 saw Kireka break DMARK’s monopoly to rewrite history. Wanyama who was named the club’s best player spearheaded his club to their first league triumph in a long time.

He retires seeded fourth in East Africa with a rating of 2280.