There has been a wave of campaign activity in Africa which seems to be the region where candidates are focusing a lot of attention. It may be called “The Scramble for Africa“. A few months back there was a sparring match between incumbent Kirsan Ilyumzhinov and challenger Garry Kasparov over who had garnered the support of West African federations. There was a joint declaration released in support of the Kasparov campaign by three West African nations… Ghana, Nigeria and Ivory Coast.

The current boiling over of FIDE politics in Gabon has many frustrated at the way the campaign is going. One such player is decorated Nigerian Odion Aikhoje who won a gold medal in the 1998 Elista Olympiad. He knows about how politics can interfere with chess as it took him more than ten years to retrieve his gold medal after he wrote an appeal. He has written an essay on the issue recounting the entire saga… all to the wonderment of the media.

This year’s FIDE Presidential Election campaign has been a ‘strange one’, if I might put it so lightly. Yes, Chess can be perceived to be a ‘Cloak & Dagger’ game due to its multiplicity of themes and motifs; however the level of skulduggery in this year’s FIDE Election campaign simply boggles the mind. Mud-slinging, back-stabbing and extensive double-crossing are just some of the many strange occurrences that have been happening on a worryingly regular basis as pace gathers towards the FIDE Presidential Election next month.

On one side we have the incumbent – H.E. Kirsan Ilyumzhinov, former President of the Russian Republic of Kalmykia who has been in charge of FIDE since 1995, on the other we have former world champion and arguably the greatest to ever play the game of Chess – Garry Kasparov. Sadly, in the middle we have almost 200 National Chess Federations around the world being buffeted and rocked by the substantial turbulence generated by these two gladiators. 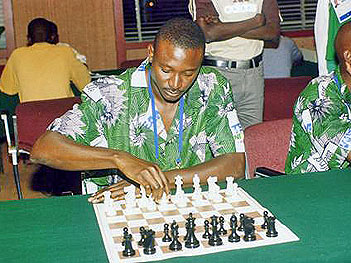 During other FIDE Elections in recent history – Anatoly Karpov’s campaign and the ‘Right Move’ campaign of Bessel Kok come to mind, affairs were conducted mainly in the spirit of sportsmanship and gentlemanly values innately associated with our noble game of Chess – of course, there would have been pockets of clandestine activity, but not on the scale witnessed today! Scandals from the AGON contract, the Ignatius Leong affair and pre-declaration of delegates for preferred candidates have been easy pickings for the international media – slow to report on positive activity in the world of Chess but swift as Hawks to swoop on negative news such as Chess players coming to fisticuffs over girls at parties. The latest unsavoury news coming out of Chess circles is the position (or otherwise…) of some African Federations regarding their candidate of choice in the upcoming Election.

Nigeria once again finds herself in the condescending gaze of international media as the Teams of Ilyumzhinov and Kasparov claim to have the support of the most populous black nation on earth in the forthcoming FIDE Elections. The melodrama started back in December when according to an inside source, President of the Nigeria Chess Federation, Mr Lekan Adeyemi told the NCF Board that the Kasparov Chess Foundation (KCF) had put forward a proposal to sponsor a Chess in Schools (CIS) program in Nigeria to the tune of approximately 500,000 US Dollars. What was not clear then was if Nigeria had declared support for Kasparov’s FIDE Presidential candidacy. The next act was a visit by Garry Kasparov and a high-powered team of businessmen to Nigeria in January to meet representatives of the Nigerian government including officials from the Education Ministry and the National Sports Commission (NSC). After that meeting, the word from the Kasparov camp was that the CIS Program would take off in September (https://kasparov2014.com/2014/02/24/nigeria-rising-officials-business-leaders-welcome-kasparov/). The Kasparov camp also announced the NCF President as their ‘preferred candidate’ for an ‘African Chess Confederation’ which would move the continent forward in Chess.

The next part of the melodrama was the dramatic visit of the FIDE President, Kirsan Ilyumzhinov to Nigeria in February. The NCF President declined to receive Ilyumzhinov, saying he was busy at a local University Chess festival; this prompted Ilyumzhinov to call on the President of the Africa Zone 4.4 and other Chess personalities to receive him in Abuja. While in Abuja, the FIDE President also met with the Nigeria Olympic Committee (NOC) President to discuss the possibility of including Chess in the Winter Olympics (https://www.fide.com/component/content/article/1-fide-news/7742-working-meetings-in-angola-and-nigeria.html).

The visit of Ilyumzhinov created a mini-crisis within the Nigeria Chess Federation with the NCF President openly supporting Garry Kasparov; a few days later, the Kasparov campaign website released a declaration by Cote D’Ivoire, Ghana and Nigeria in which the leaders signed a letter, declaring support for Kasparov (https://kasparov2014.com/2014/02/17/joint-declaration-by-the-national-chess-federations-of-cote-divoire-ghana-and-nigeria-regarding-the-2014-fide-presidential-elections/). The President of the NCF also took steps to ensure Nigeria’s support for Kasparov by making himself the Delegate and Rating officer of the NCF as listed in the FIDE Directory (https://www.fide.com/fide/directory/member-federations.html?task=country&fid=108).

Fast-forward a few months to submission of candidate nominations for the actual FIDE Election and Nigeria somehow missed the deadline to nominate Kasparov for the Presidential ticket. The reason given was that a last minute change in Kasparov’s team invalidated Nigeria’s nomination (https://www.fide.com/component/content/article/1-fide-news/7982-nomination-for-presidential-tickets.html). Very interesting…

And now, with the latest stanza in the FIDE Election battle Nigeria is once more in the spotlight for all the wrong reasons. A few days ago, the FIDE President was in Nigeria for a flying visit through Africa in which he met the Honourable Minister of Sports and other top officials in the NSC. Apparently, Ilyumzhinov’s visit was an attempt to undermine the recent declaration of support for Kasparov by several African countries as posted on Kasparov’s campaign website – www.kasparov2014.com (https://kasparov2014.com/2014/07/01/end-of-the-myth-africa-for-team-kasparov/). After the visit, Ilyumzhinov’s team posted articles to the FIDE website (https://www.fide.com/component/content/article/1-fide-news/8137-fide-presidents-visit-to-nigeria.html) and to Kirsan’s official campaign website – www.fidefirst.com (https://fidefirst.com/?p=3096).

Team Ilyumzhinov claimed three African countries, including Nigeria, had performed an about-face and declared support for Ilyumzhinov’s re-election campaign. Interestingly, the article about Nigeria claimed the Honourable Minister of Sport had declared support for Ilyumzhinov and that the FIDE President was “working towards assisting the NCF in preparation towards the Olympiad”. The response to these Team Ilyumzhinov publications was a strongly worded article on the Kasparov campaign website which declared that Team Ilyumzhinov was simply peddling baseless lies. Additionally, the website posted a statement from the NCF President in which he refuted the claims of Team Ilyumzhinov and reaffirmed his PERSONAL SUPPORT for Team Kasparov (https://kasparov2014.com/2014/07/11/kirsan-news-agency-truth-dashed-in-nigeria/).

All this melodrama is really reading like a classic ‘B Movie’. Personally, I feel this ‘strange’ FIDE Election campaign is hurtling headlong towards a ‘Scorched Earth’ in which the National Chess Federations and Chess in general will face the long-term brunt of all this skulduggery. What happens ‘The Day After’ the Election is done? Only time will tell…