Legal documents have been filed with the FIDE Electoral Commission by the Kasparov campaign accusing the Kirsan Ilyumzhinov campaign with a list of violations including illegally changing the identity of the voting delegates for Gabon and Afghanistan. The complaints also state that FIDE has listed “Netherland Antilles” as a voting member though the Dutch territory disbanded in 2010.

This controversy has boiled over since the initial complaint was launched by Gabon accusing FIDE of illegally changing the Gabonese officials to reflect an unelected board. A similar accusation was made by Afghanistan and posted on a site called, “FIDE X-Files“. 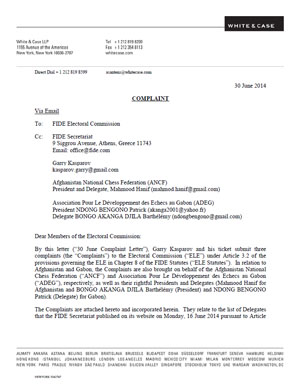 By this letter (“30 June Complaint Letter”), Garry Kasparov and his ticket submit three complaints (the “Complaints”) to the Electoral Commission (“ELE”) under Article 3.2 of the provisions governing the ELE in Chapter 8 of the FIDE Statutes (“ELE Statutes”). In relation to Afghanistan and Gabon, the complaints are also brought on behalf of the Afghanistan National Chess Federation (“ANCF”) and Association Pour Le Développement des Echecs au Gabon (“ADEG”), respectively, as well as their rightful Presidents and Delegates (Mahmood Hanif for Afghanistan and BONGO AKANGA DJILA Barthélémy (President) and NDONG BENGONO Patrick (Delegate) for Gabon).

The Chess Drum has received four documents (summary and three cases) composed by White & Case law firm detailing the points of protestation. The law firm represents Garry Kasparov and his campaign. The complaints go into detail citing the points of violation and in summation, request reparation and restitution of rights.

It is unfortunate that smaller (otherwise powerless) nations have to become the political football for FIDE politics. Campaigns recognize that smaller nations are in the majority and their votes are crucial to carrying the election since each of the 181 FIDE members gets a singular vote. Thus, it becomes important that this democratic structure is maintained.

According to source close to the case the Electoral Commission has to rule on the matter in a few days. If the accusations are true, it cannot be tolerated and reparation would have to occur. This tears at the very core of “GENS UNA SUMUS” that FIDE prides itself on.

This is shaping up to be one of the most hotly-contested and nastiest campaigns in FIDE history. Both campaigns have hurled charges accusing each other of conflict of interest and shady dealings. The election will take place during the Olympiad in Tromso, Norway next month during the General Assembly meetings.