Superstar actor Will Smith is known to the most chess fans worldwide as a chess enthusiast and player. Most recently he endorsed the “Millionaire Ches Open” to be hosted by GM Maurice Ashley and business icon Amy Lee. The tournament is scheduled to begin on October 9th, 2014. 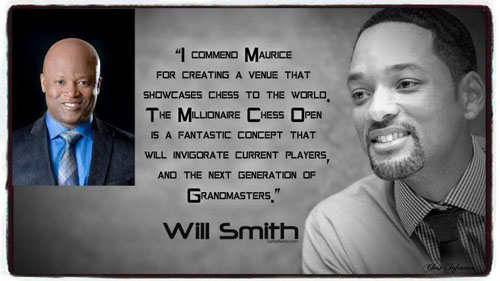 Smith’s interest in chess has a very interesting history. Having learned from his father at the age of seven, Smith maintained his interest in chess despite his high profile as an A-list actor. To show his enthusiasm, there are a couple of quick anecdotes that come to mind. Back in 2001, Smith was filming a movie in Chicago at which time the Chicago Board of Education invite Ashley to speak to elementary school children. The schedule was tight for Ashley so he recommended National Master Marvin Dandridge, a Chicago-based 2300 player.

Dandridge unexpectedly received a call from Smith’s staff inquiring about lessons. Probably with a sense of shock, “Uncle Marv” went to the actor’s hotel and gave a two-hour lesson. Not many details are known about this meeting, but suffice it to say, it would have been interesting to be a fly in the room that evening.

Smith had also taken lessons from Robert Snyder, a long-time coach on the west coast. While there are quite a number of celebrities who play chess, few take lessons for it. To really show his love for chess, there was an even more memorable story with Smith’s chess adventures. It is a story Ashley loves to tell.

Smith’s wife, Jada Pinkett-Smith got in touch with GM Ashley as part of a gift for Valentine’s Day. As Ashley walks in the room, Ms. Smith told her husband that Ashley was here as a surprise gift for a chess session/lesson. After an hour or so, Ashley nudged Smith that he should check on his wife. It was after all, Valentine’s Day! Smith said it was OK and they played until he had enough. “It takes a special wife and an insane husband to play chess on Valentine’s Day,” quipped Smith.

Smith would later write the foreword to Ashley’s “Chess for Success“. Ashley was surprised that the megastar had taken the time to write a glowing endorsement. Perhaps more are coming.