Just posted an oldie, but goodie. The game is actually one-sided attack, but shows how to conduct an attack against the king. Chicago native National Master Marvin Dandridge is one of the most gifted tacticians I have ever seen. I had the opportunity to train with him and was on the wrong side of his stunning sacrifices. In analysis sessions, he was quick with tactical variations. When you played him you could sometimes feel that something bad was about to happen when the position got complicated. As I matured, I was able to do better against this style, but he certainly made a positive impression on me. 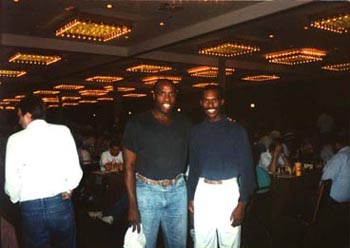 Dandridge was also one of the funniest chess players around. His sense of humour was raucous and sometimes off-color, but he kept things enjoyable around Chicago’s Tuley Park chess club back in the 80s. He was also the best trash-talker and would perform any number of songs, foreign accents and chants during a blitz game and yell “MATE!” when he chalked up another victory. We all loved it! He is now affectionately known in the Chicago area as “Uncle Marv.”

Back in the glory days, Dandridge was a chess terrorizer… a muscular fit of a man and champion wrestler. We both attended the same Chicago Vocational High School (CVS) and played under Tom Fineberg. Dandridge was several years ahead of me, but by the time I met him, his fame had already preceded him. He has a twin brother Martin Dandridge, who was the captain of the football team. Marvin was also on the team, but not as accomplished as his brother. If you asked Marvin what position he played, he’d laugh, “I played the bench.” 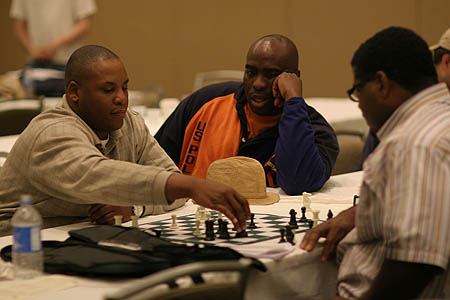 I have seen people get angry at Marvin’s barbs, but end up laughing at themselves. I remember Dandridge was in a blitz session with (now FM) Albert Chow at Jules Stein’s Chess Center on North Halsted. After Dandridge’s antics and a couple of losses, Chow got very, very angry. Chow later chuckled, “I don’t know why I got so mad at Marvin Dandridge.” He also got under the skin of (now FM) Larry Chachere after humiliating him in blitz games. Chachere, a rising star then, dismissively said to Dandridge, “You’re just a bowl of tactics.”

Marvin was never confrontational, but his raucous laughter was infectious. Nowadays, he doesn’t play in weekend tournaments, but had he put time into his game, he could have certainly been stronger than his 2350 maximum rating. Here is one of his bashings against Boris Kreiman, who was then a young star and now a Grandmaster.

See Fire on Board!