The first round of the 2014 U.S. Championship began with a bang. There were a total of six decisive games out of 11 encounters. One of the first game to end was between Timur Gareev and Gata Kamsky, ending in just 14 moves out of a Slav. This of course brought a brief discussion about quick draws as commentator Maurice Ashley took the opportunity to ask players about this practice. The response was mixed, but of course the two players have already removed a big hurdle in their schedule.

In Molner-Onischuk, white sacrificed a pawn for queenside pressure, but in the middlegame the pieces evaporated and a symmetrical rook ending was reached. Rook endings are the most common in chess and there were several in the first round including Akobian-Naroditsky which went to king vs king. Ramirez-Shankland netted nothing after a Catalan. Probably the most exciting game was Ray Robson’s win over Sergey Erenburg.

Robson, a sophomore at Webster University, conjured up a bold attack after sacrificing a pawn to gain time. He managed to get an initiative 25. g6!? Nxg6 26. Bh5 Rf6 27. Bxg6 Rxg6 28. Re7 Qd8. Robson played 29.c5! After 29…dxc5 white got a virulent attack after 30. Rd7 Qh4 31. Qa5 Rc8 32. Qxc5. However, Erenburg missed the best continuation erring with 32…Qg5?? (32…Re6!) and after 33.Qb4 white gets a winning initiative against the black king which ended up getting mated. Lenderman ground down Friedel in a nice example of good knight over bad bishop.

In the women’s field, there were 4/6 decisive results. In Nemcova-Krush, white essayed the Velimorovic Attack, but white attack going given black’s active play. There were a few tactical niceties in the end. Zenyuk-Zatonskih was a classical battle with black finally holding the balance in the rook ending despite the pawn deficit. Abrahamyan overpowered Melekhina in a Guioco Piano while Foiser scored the full point against Baginskaite. In the latter game, the Romanian uncorked a novel sacrifice 24.Nxf7! shattering black’s camp. 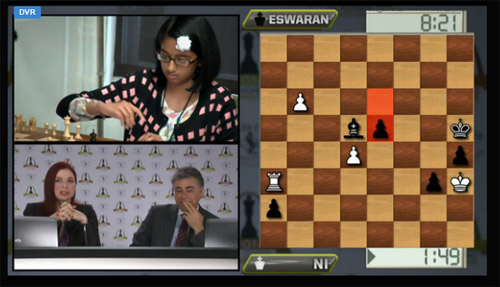 The talk of the round had to be the win by 13-year old Ashritha Eswaran. Commentators were closely following her game and had evaluated 29…Bg4 as critical. After 30. Rc3 Rxc3 31. Nf4! black’s queen is trapped, but on 31…Rxg3 32. Nxh5 Bxh5 white became overzealous. White had to give up her queen for two rooks and ended up in a difficult ending facing a steamroller of black pawns on the g- and h-file. Black finally finished off affairs with a clearout 70…e5! 71. dxe5 Bc4 (threatening mate) 72. Kg2 Kg4 and the pawns rolled through. Impressive win by the junior player!