While there were a lot of draws in today’s round, it was not for the lack of fight. In fact, the announcement of the new $64,000 prize for the women’s championship may have encouraged more fights.

Despite the six draws today, there were a couple of close calls in games where the evaluation was as much as +7! In Lenderman-Gareev, it appears that there would be a decisive result when white developed a strong attack for a pawn after 24.Nxg7! Lenderman then went forth to sacrifice his queen after 27.Qxf5! As it turned out white did not have enough. 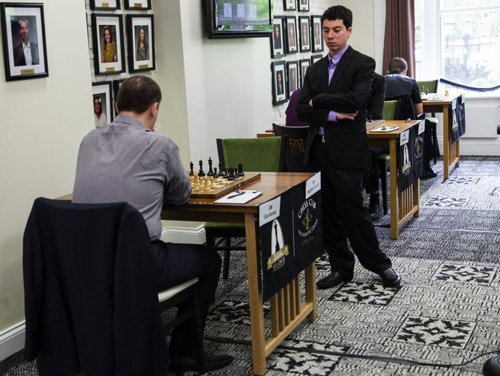 A rematch of last year’s tiebreaker. Although not victorious a better result for Ramirez. Photos by Lennart Ootes.

Ramirez was happy to get another draw as black against Kamsky as he stated he surprised the defending champion with the French Defense. Kamsky counter with the Advance variation, but got nothing. The game went on for 56 when they could have agreed 15 moves earlier after 40. Nxd5 Nxd5 41. Rd1. Molner-Akobian had its moments of excitement but black ended matters after having sacrificed a piece with 42…Nxd4!? Onischuk-Erenburg was fairly level throughout but black sacrificed a piece for counterplay with a passed pawn. In some very instructive play, white was able to stop the passed pawn, but black had enough tactical resources to hold the balance.

Probably the most puzzling game was Naroditsky-Friedel which was an opening disaster for white. Black expanded on the queenside and white missed that on 22.Bxb5 black would have 22…Nxe5! After this, black continued to press after playing 22…a4, 23…a3 forcing white to further weaken the queenside. With the queenside compromise, white sought counterplay in the kingside with 37.g4. Black had to shift his defenses over to protect his king and this gave white enough time to get dynamic equality. The game ended in a three-fold repetition. 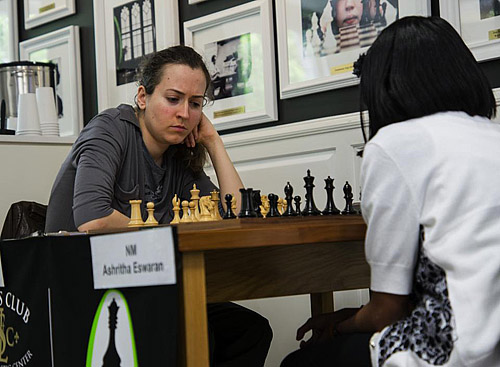 In the women’s competition, Krush dominated Eswaran, when the youngster misplayed the move order against the English and was never able to establish the flexible hedgehog position due to dangerous e5 threats. After misplaying a few more moves, she lost a pawn and the game was rather easy for the defending champ. In the final position, black is getting mated. 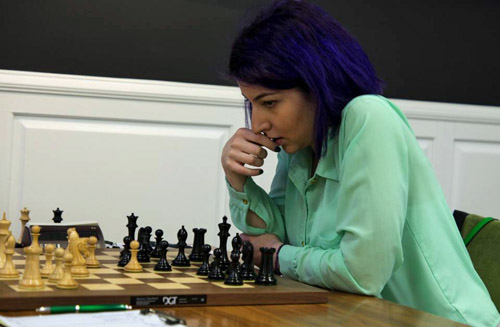 Nice fashion statement, but no color in today’s game for the young star.
Photo by Lennart Ootes.

Zatonskih-Abrahamyan marked yet another win by the four-time U.S. champion as we saw another Advanced French this round. This was a very clean win with white developing a nice advantage in space and a king’s knight that earned its paycheck! The rook maneuver at the end was very instructive.

A third Advanced French in Melekhina-Foisor ended a bit better for black this time as white played a dubious pawn sacrifice and got nothing for it. Black’s central pawn mass simply rolled up the board and steamrolled the position.

“After (Melekhina) traded queens, I didn’t think I could lose anymore,” Foisor said. “I thought my position was pretty much OK, because my pawn structure was intact and I could just start pushing them. We were both in time trouble, so I thought maybe I had some chances to starting pushing the pawns without enough time for her to calculate.”

Black won a trivial king and pawn ending. Nothing much happened in Nemcova-Zenyuk, but Baginskaite-Ni had a nice buildup that eventually included a white attack and the a black queen sacrifice to stem the tide. After that black had a slight structural advantage, but not enough to claim any decisiveness.