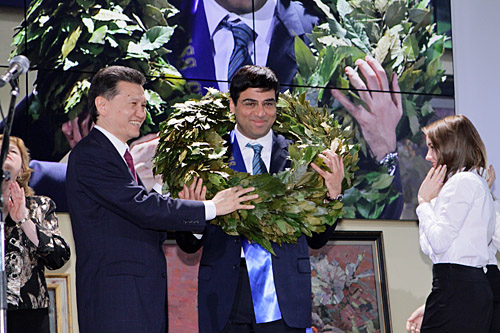 Viswanathan Anand has defeated Boris Gelfand to successfully defend his crown. Anand has certainly etched a place in chess history by defending his world title for the 3rd time since unification. He has held additional titles in both knockout and tournament formats. He has been the unified champion since 2007 defending against Vladimir Kramnik, Veselin Topalov and now Boris Gelfand. This match drew a lot of criticism for its short and uninspired draws, but the tiebreak was a lot more exciting.

The four-game rapid match began with a tactical melee out of a Slav after 20… Qxb3 21. Reb1 Bxg3 22. Ra3. Blow-for-blow, pieces zipped around the board and it appeared that one of the player’s king may fall on a sword. The game suddenly saw a series of exchanges and petered out to a draw.

The second game saw another Rossolimo by Anand, his third of the match and the fans were looking for yet another improvement. Anand varied from Game #10 which began 1. e4 c5 2. Nf3 Nc6 3. Bb5 e6 4. Bxc6 bxc6 5. b3 e5 6. Nxe5 Qe7 7. Bb2. Anand went for 7.d4 and a series of exchanges ensued with Gelfand playing the improbable 0-0-0!? Anand’s preparation worked as he won a pawn and began building up pressure. Gelfand was able to double the rooks on the 7th, but Anand had calculated the lines, held his pawn plus and parried counterplay. However, commentators were stating the game was headed for a draw, but Gelfand was low on time and apparently made a misstep. Anand out-finnessed Gelfand and won a textbook ending. Gelfand would have two chances to equalize.

In game three, Gelfand wanted to score and looked close to achieving it. After a tense middlegame, white earned a grip on the position, but missed 26.Nxe4! Nd7 (26…fxe4 27.dxe5 winning the Bb8) 27.Nd6 with a decisive advantage. He then made a strategic mistake with 27.Nxe4 when after 27…fxe4 28. Qf2 Qg7 29. Kh2 Rcf7 black developed compensation. In fact, it appeared as if Anand had the initiative after 35…Nf4, but it dissipated and soon it was Anand who had to find the draw in the rook and pawn ending. Fortunately for him, he was able to find the plan.

This was do or die for Gelfand, but he knew it would be an uphill climb for him. This time Gelfand was fixing for a fight after 1. e4 c5 2. Nf3 d6. However, Anand played 3. Bb5+ he faced yet another Rossolimo which have made the Israeli a bit uncomfortable. After 3…Nd7 4. d4 Ngf6 5. e5!? sharp play ensued after after 5…Qa5+ 6. Nc3 Ne4 7. Bd2 Nxc3 8. Bxd7+ Bxd7 9. Bxc3. Gelfand played aggressively but Anand mobilized quickly seizing the e-file. The champion’s active squelched any chance for counterplay. Anand played precise intermezzo moves and the final position was completely equal.

One of my weekend games...